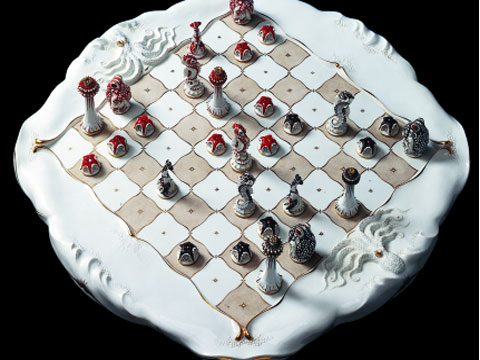 Some mind games—such as chess or backgammon—are eternally entertaining. Chess sets themselves are often treated as works of art. Meissen has produced sets for the past three centuries that intrigue and delight, and a limited-edition reintroduction of Sea World, one of the company’s most whimsical designs, is a standout this spring. Designed by Max Esser and originally made in 1923, the chess set has a marine theme that pays tribute to the reigning world chess champion of the period, José Raúl Capablanca, who hailed from Cuba.

The intricate details of Esser’s starfish pawns, sea horse knights, lobster bishops, and octopus rooks show his particular genius for sculpting animals. The Sea World set ($36,000) is from an edition of 19 from the Century Collection, a series that debuted in 1999 highlighting the German porcelain company’s artistic legacy. Editions from this series feature a special gold signet back stamp. It is a rare event when a chess set is released, as Meissen only produces them when one of its artists feels inspired. The last set, issued in 1986, was Peter Strang’s Heaven and Hell, which features saucy demons challenging demure deities.