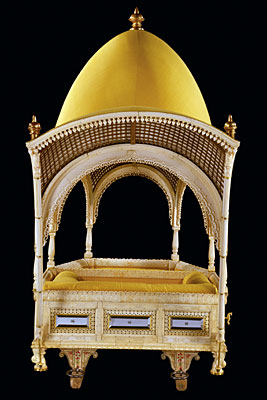 Just as a cowboy has his horse and saddle, an Indian royal had his elephant and howdah. This particular example—with original paint still clinging to the wooden runners—probably was made circa 1820 for the Maharajah of Murshidabad, a principality in northern India. Unlike most howdahs, this one was built for two, accommodating the prince and his right-hand man. “He would sit behind the prince and whisper in his ear [about] who he should recognize in the crowd and who he should deign to be nice to,” explains Giles Hutchinson Smith, managing director of London- and New York–based antiques dealer Mallett, which is offering the item for a price in the mid-six figures.

Although he regards the howdah as a piece of sculpture, Hutchinson Smith says that it could serve a more utilitarian purpose. “It’s an amazing talking point—or the ultimate dog bed. Pieces of this type have sold for that purpose.”