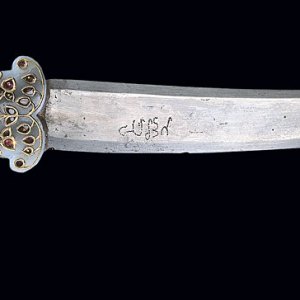 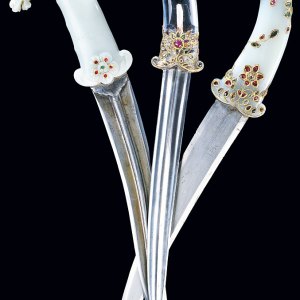 An Indian prince of the late 17th and early 18th centuries would not be caught dead without his dagger—if he had any sense of style. “Daggers were male jewelry, worn only by royals and aristocrats, and meant to catch the eye,” says Peter Finer, a London-based dealer of antique arms and armor (+44.20.7839.5666, www.peterfiner.com). His holdings include these daggers, which were made in India and date from the period 1680 to 1740. Each is valued at more than $50,000.

These weapons, which feature handles carved from either jade or rock crystal, were mostly ornamental, but they could do damage: Finer says that the horse-head dagger has a reinforced steel blade that would pierce chain mail. “You can draw an analogy with people who own extremely extravagant rifles,” he says. “They never shoot them, but that doesn’t mean they can’t use them.”