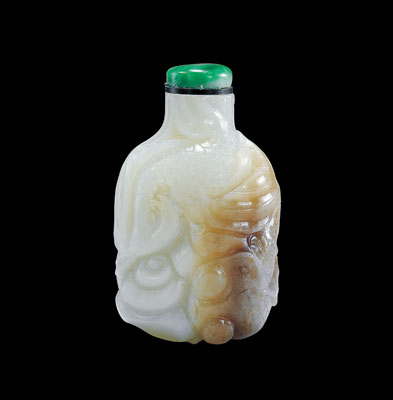 Powdered tobacco, or snuff, became a favorite indulgence when it arrived in China in 1644, but because Chinese men of that era typically kept their fingernails long, they never adopted the snuffbox, a fancy container from which Europeans would take a pinch of powder and inhale it directly from their fingers. The Chinese invented an alternative: the snuff bottle, a tiny vessel with a stopper containing a spoon that was used to spread snuff on the skin between the thumb and index finger, where it could be inhaled easily. Like European snuffboxes, the bottles remained collectible items even after they fell from fashion.

Chinese artisans made snuff bottles from glass as well as nephrite, a type of jade. (Click image to enlarge)

Robert Hall, a London antiques dealer who specializes in Chinese snuff bottles, will show these and other examples at the 2006 edition of the European Fine Art Fair, to take place from March 10 through 19 in Maastricht, the Netherlands.