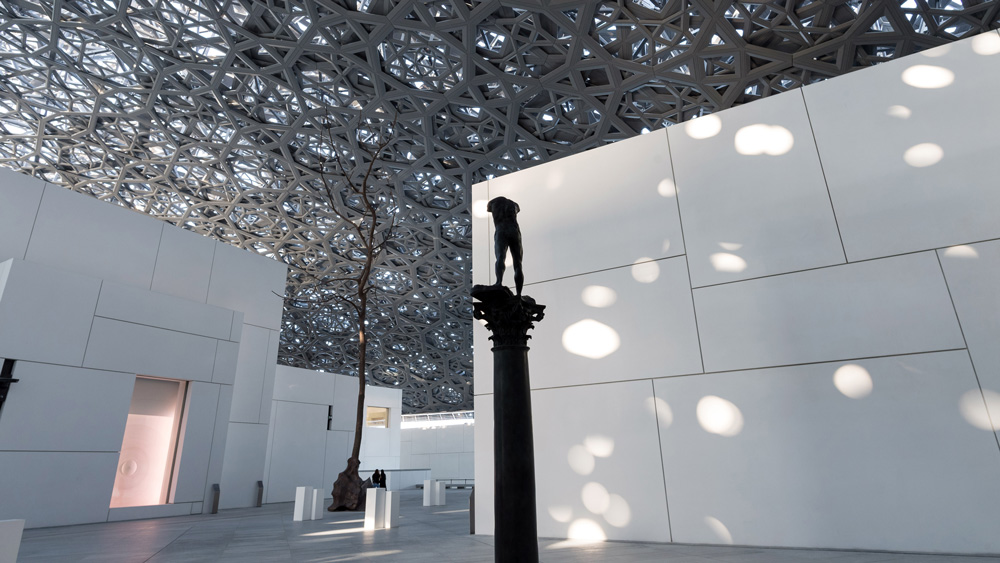 Of the eagerly anticipated inaugurations of new exhibition spaces for art over the past year, three stood out, warranting inclusion in Robb Report’s “Best of the Best” issue based on their innovative design and the sheer quality of the works on view. Our picks: the Jean-Nouvel-designed Louvre Abu Dhabi, Axel Vervoordt’s Kaanal on the outskirts of Antwerp, and Hauser & Wirth’s new Asia outpost in the H Queens building in Central Hong Kong.

more than a decade after announcing its plans to build the Jean Nouvel–designed franchise of the French institution. Dominated by the Rain of Light—a dome, some 590 feet in diameter, arcing over many of its 55 galleries—the museum is envisioned as part of a “starchitect”-designed cultural campus on Saadiyat Island that is slated to include a Guggenheim outpost by Frank Gehry, the Zayed National Museum by Norman Foster, and a performing arts center by the late Zaha Hadid. Among the notable works going on display, which span the history of civilization, is Leonardo da Vinci’s Salvator Mundi, a recent arrival on long-term loan from its Saudi owner, widely reported to be Crown Prince Mohammed bin Salman.

In late November, Belgian tastemaker Axel Vervoordt lifted the veil on Kanaal, a 600,000-square-foot mixed use art, commerce, and residential campus on the outskirts of Antwerp. Some seven years in the making, Kanaal was realized with the help of the Tokyo-born, Brussels-based architect Tatsuro Miki, who converted the abandoned 19th-century industrial complex into a headquarters for Vervoordt’s multifaceted design enterprise. A number of buildings on the property have been repurposed as public exhibition spaces, including a chapel, in which James Turrell’s monumental light work Red Shift (1995) has been installed, and a suite of grain silos that house pieces by Marina Abramović, Takis, Angel Vergara, Otto Bol, and Otto Piene. The works are among more than 600 spanning some 6,000 years of history in the permanent collection of the Axel & May Vervoordt Foundation.

Swiss gallerists Iwan and Manuela Wirth made waves with the March opening of a new outpost in Hong Kong. Their inaugural show of works by Los Angeles artist Mark Bradford sold out within hours of the ribbon-cutting, affirming the couple’s keen sense of timing in making the move.

“It was never a matter of if we would open a space in Asia, only when,” says Iwan, adding that “the circumstances forestablishing a gallery in Hong Kong were suddenly right.” The addition expands the global footprint of Hauser & Wirth, which has galleries in Zurich, London, New York, and Los Angeles. The new gallery is located within H Queens, an art and lifestyle concept space on Queen’s Road in Central Hong Kong that has already leased prime gallery property to David Zwirner, Pace, and Pearl Lam.