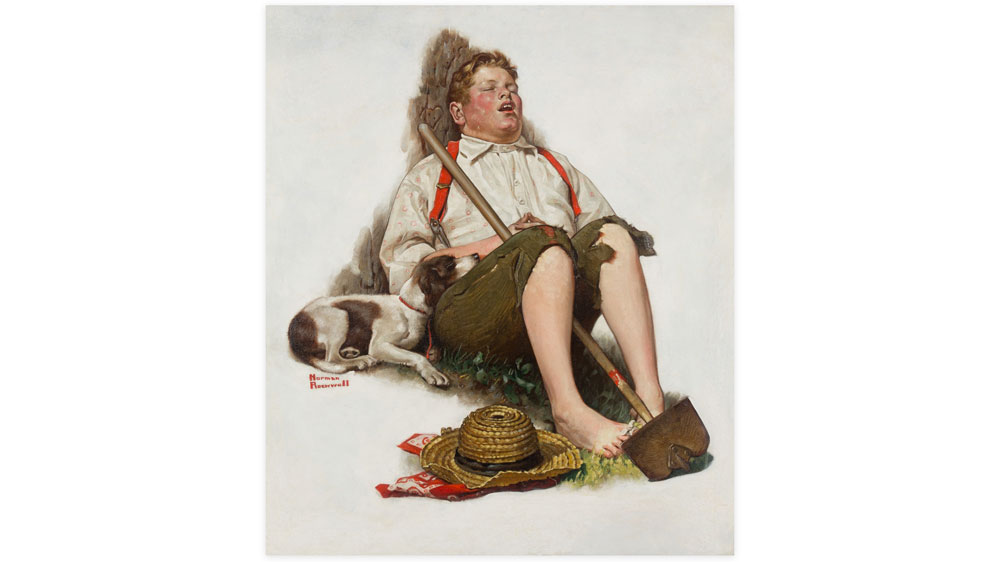 Aviva Lehmann has been fielding press calls—a lot of press calls—about the Norman Rockwell Saturday Evening Post cover painting that will appear in Heritage Auction’s November 3 American Art sale in Dallas. “People are eating up the story,” says Lehmann, Heritage’s New York director of American art, alluding to the fact that the painting, a 1919 canvas called Lazybones, had been stolen in 1976 and recovered by the FBI earlier this year. “The quality is there, but the story is part and parcel of the work.”

Heritage estimates Lazybones at $1 million to $1.5 million—a sum that would drop Rockwell’s jaw if he were alive to hear it. He never pretended to be a fine artist, but during the last 15 years, his canvases have commanded fine art prices at auction. When the original painting for Saving Grace, a 1954 Post cover, sold for $46 million at Sotheby’s in 2013, he became the most expensive artist in the American art category, beating Mary Cassatt, Edward Hopper, John Singer Sargent, and Georgia O’Keeffe, among others.

Rockwell painted between 321 and 322 covers for the Saturday Evening Post, and the original canvases fetch a premium at auction. “The most iconic, recognizable images are what people want. For the most part, they’re Post covers. It’s Saturday Evening Post covers, then anything else,” Lehmann says. “If something has tremendous quality that’s equal to a Post cover, it [still] has a fraction of the value.” The ones Rockwell made later in his career are more sought-after than his earlier cover paintings, which have white backgrounds and a more limited color palette. “The early ones are worth $1 million to $4 million—still a lot of money, but there’s definitely a difference,” she says.

Sotheby’s, which set the auction record for a Rockwell, will offer two of his Post cover paintings in its November 13 American Art Auction in New York. Shuffleton’s Barbershop, painted in 1950, is estimated at $20 million to $30 million. Blacksmith’s Boy – Heel and Toe (Shaftsbury Blacksmith Shop), from 1940, carries a $7 million to $10 million estimate. (The sales come with a side order of controversy. The Rockwells belong to the Berkshire Museum in Pittsfield, Mass., and many have criticized its decision to sell. Rockwell’s heirs recently met with the Massachusetts attorney general in hopes of finding a way to stop the auction. On October 20, Rockwell’s sons and others filed a temporary restraining order in Massachusetts Superior Court against the sale of the two Rockwells and 38 other works the museum’s trustees wish to deaccess.)

“It wouldn’t be surprising if it [Shuffleton’s Barbershop] sold for a record price,” Lehmann says. “It’s not outside the realm of possibility.”

On November 3, Lazybones fell somewhat short of its $1 million to $1.5 million expectations, selling at Heritage Auctions for $912,500.

On November 10, the Massachusetts Appeals Court blocked the sale of Shuffleton’s Barbershop (1950) and Blacksmith’s Boy – Heel and Toe (Shaftsbury Blacksmith Shop)(1940) at Sotheby’s, imposing an injunction that expires on December 11.