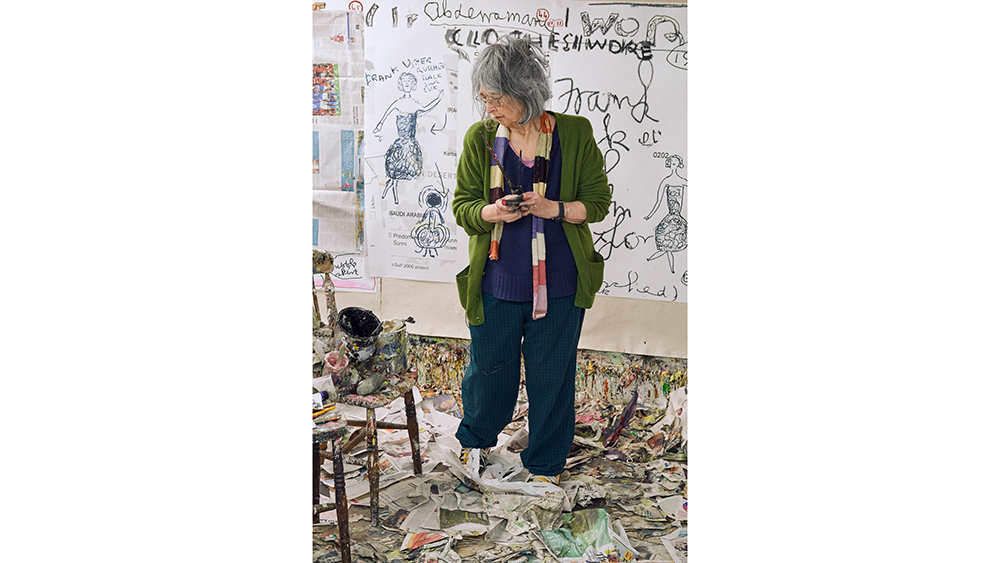 In the contemporary art world, “emerging” almost always means “young.” So when Rose Wylie broke through a decade ago with big, bright canvases of figures painted in a loose, cartoonish style and often captioned with scrawling text, many applauded the fact that she was well into her 70s. Now 86, Wylie is still on the upswing, coming off a recent, acclaimed show at the Aspen Art Museum and poised to make her David Zwirner New York solo debut this month.

Neither her newfound recognition nor her age has altered her daily work habit or her process, which typically involves drawing from memory, Wylie tells Robb Report from her 17th-century house in Kent, England. In the chilly studio there, she’s currently toiling over a painting of what she describes as a “long, suave American car” she recalls seeing in ads for the Peninsula Hotel. The point is not to make a precise copy of it, she explains, but to allow memory to transform the image.

Illuminated Manuscript, Adam and Eve, oil on canvas, 2020  Courtesy of the Artist and David Zwirner

As a young woman, Wylie finished art school but soon married Roy Oxlade, who went on to an important painting career while she raised their children. “I put it on ice,” she says of her own practice. When the kids were grown, she took a second go at art school, graduating from the Royal College of Art in 1981. But for decades, her canvases sat largely unnoticed, a fact that doesn’t bother her much. “He was well known, and I wasn’t known at all. That gives you a certain freedom and also impetus. The carrot is waving in front of you.”

Wylie was a frequent muse to Oxlade, who died in 2014, but her husband mostly avoided her studio—he was appalled by the mess. “He got paint all over his clothes when he came in,” she says, but otherwise they “got on terribly well.”

Yellow Head III, oil on paper, 2020  Courtesy of the Artist and David Zwirner

Wylie relies on the shared experiences of everyday life for her initial ideas, whether looking out the window at a bird, remembering the London Blitz from her childhood or watching a movie by Quentin Tarantino, one of her favorite filmmakers. For a group of paintings in the Zwirner show, she found inspiration in Mexican retablos, folk-art devotional paintings that depict trials and tribulations. One of her humorous takes on the genre shows a cleaver-wielding butcher distracted by a woman in a short skirt. “He takes his eyes off the game and chops his hand off,” Wylie says with a laugh.

Wylie’s references, be they movie scenes, royalty, animals or World War II aircraft, give a viewer an accessible portal but are in some ways beside the point. Her works, she says, are about painting itself. “It doesn’t matter if you’ve seen the film,” she says. “The main reason [to paint] is to make a visual thing, an object. They say, ‘What’s the point?’ The painting is the point. It’s not an illustration of something else.”