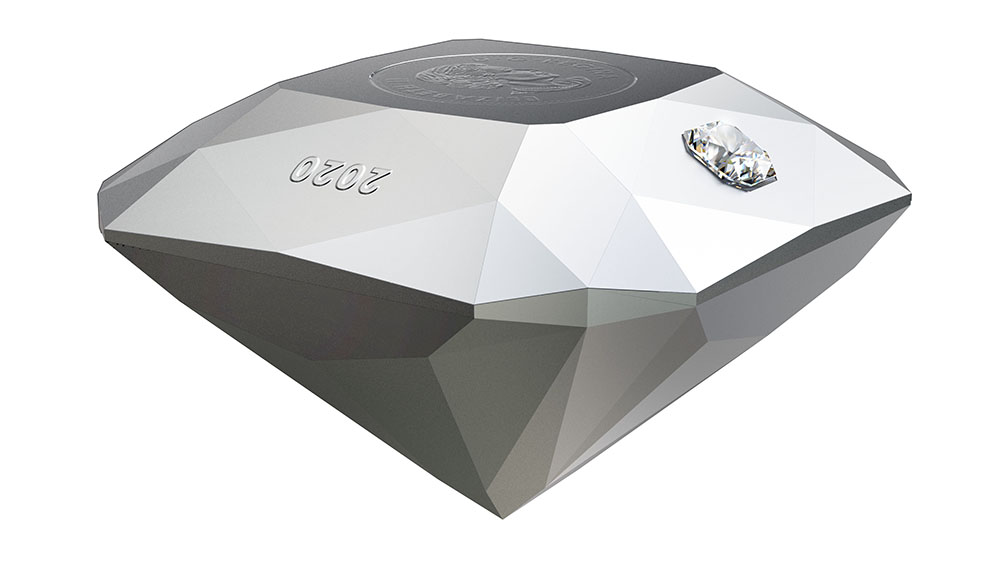 Anyone paying attention to collectible coin market has undoubtedly seen some rare examples over the years. Still, it’s unlikely they’ve seen anything like the Royal Canadian Mint’s latest release—a diamond-shaped coin with its very own embedded diamond.

Meant as a celebration of our neighbor to the north’s perfectly cut gemstones, the mint’s most recent coin is aimed at collectors’ market and is the world’s first shaped like an multi-dimensional diamond. But the state-owned company didn’t stop there, as a genuine Forevermark sparkler has been embedded into one of the coin’s engraved facets.

Designed in conjunction with Crossworks Manufacturing and Forevermark diamonds, the unique coin is made from 3 oz of 99.99-pure silver, according to its listing.  Featuring a matte proof finish, the coin boasts a portrait of Her Majesty Queen Elizabeth II by Canadian artist Susanna Blunt, the same likeness that’s been used on the country’s coins since 2003. Other decorations include the words “Canada,” “2020” and “50 dollars” engraved on the facets, along with the coin’s 0.20-carat square-cut Forevermark Black Label diamond which was mined at the Victor Mine in Northern Ontario before its closure in 2019.

According to the company, it took over a year to design and develop the new coin. It comes in a specially designed display capsule with a mirror at the bottom to reflect light on angled diamond cuts that have been engraved into the coin. Like all of the Royal Canadian Mint’s collectible coins, it also comes with its own serialized certificate of authenticity.

“This coin is an incredible example of the capabilities of our Research and Development lab,” said Royal Canadian Mint Product manager Erica Maga. “Getting this coin right took months and months of testing!”

Despite featuring an engraved face value of $50 CAD (about $37), the diamond-shaped coin actually costs 30 times that: $1500 CAD ($1117). Limited to a production run of just 700, the coin has sold out but don’t be surprised to see one or two pop up on the secondary market soon. The mint expects deliveries to begin at the end of the month.