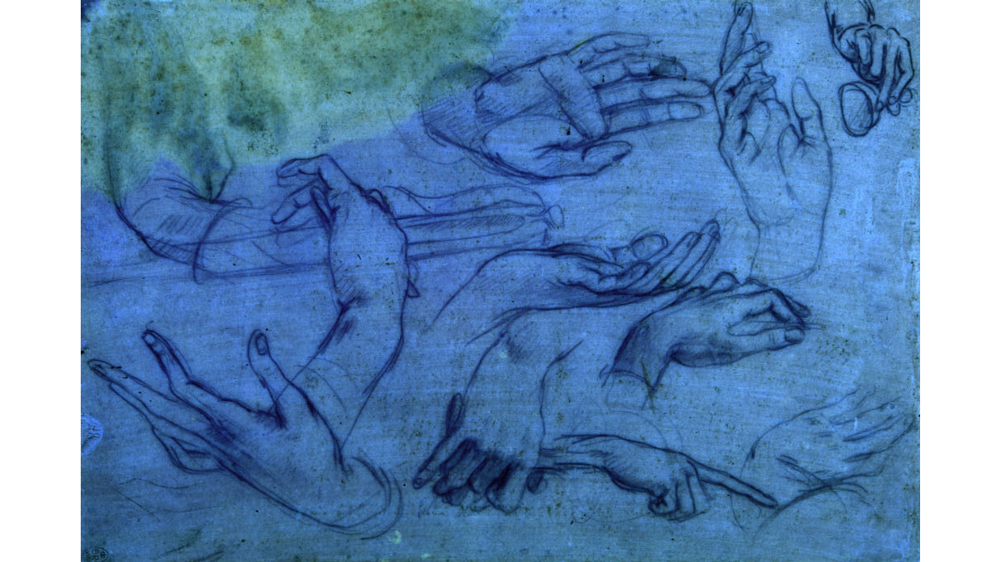 Art history buffs from around the globe will be pulling out the stops in 2019 to mark the 500th anniversary of the death of Leonardo da Vinci—including Her Majesty Queen Elizabeth II. The British monarch is lending 144 drawings by the Renaissance master from the Royal Collection to a dozen museums across Britain for a simultaneous exhibition titled Leonardo: A Life in Drawing. The works, says Martin Clayton, head of prints and drawings for the Royal Collection Trust, have been selected to reflect the full range of Leonardo’s interests—painting, sculpture, architecture, music, anatomy, engineering, cartography, geology, and botany.

Among the highlights will be two seemingly blank sheets of paper that will be paired with ultraviolet imagery that reveals them to bear a suite of studies for hands for Leonardo’s circa 1481 painting Adoration of the Magi, which has been in the collection of the Uffizi Gallery in Florence since 1670. The drawings, Clayton explains, had been executed in what is known as “metalpoint,” which has a high concentration of copper in the stylus. Over time, the metallic copper had decayed into a transparent copper salt, rendering the drawings invisible to the naked eye.” Other notable works include A Deluge (1517–18), the Head of Leda (1505–08), and Mortars Firing into a Fortress (1503–04).

According to Clayton, all of the drawings by Leonardo in the Royal Collection had been bound into a single album by the sculptor Pompeo Leoni in Milan sometime around 1590. They entered the Collection during the reign of Charles II.

Following the nationwide event, which runs from February 1 to May 6, the drawings will be reunited in an exhibition of more than 200 works at the Queen’s Gallery in Buckingham Palace, the largest exhibition of Leonardo’s drawings in more than 65 years. A selection of 80 drawings will then travel to the Queen’s Gallery at the Palace of Holyroodhouse in November 2019. That modest exhibition will constitute the largest group of Leonardo’s works ever shown in Scotland.