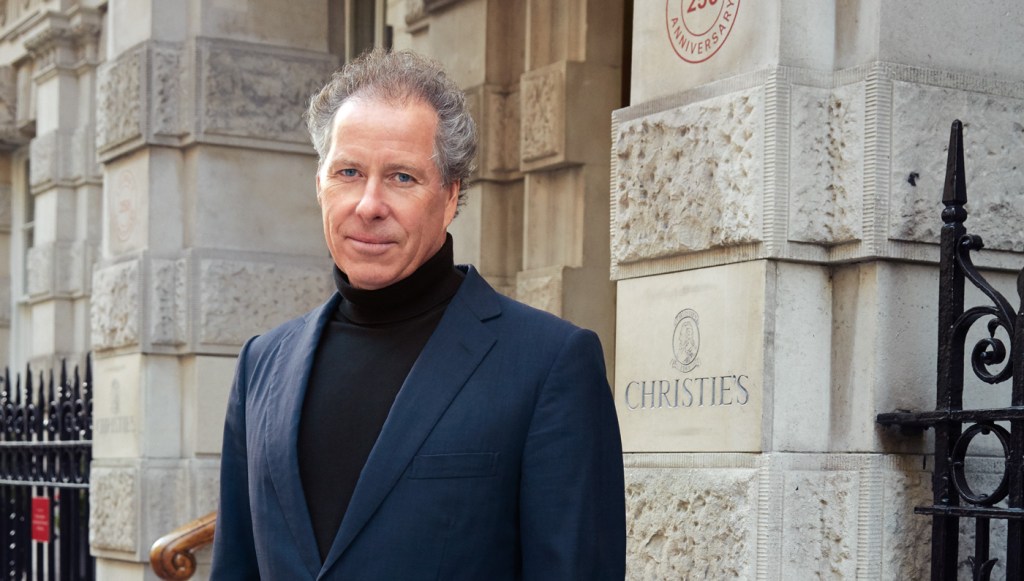 As Christie’s UK celebrates 250 years in business, its chairman reflects on the importance of heritage and the dynamic future of collecting.

David Armstrong-Jones is known more formally as Viscount Linley, the son of Princess Margaret and Antony Armstrong-Jones, the first Earl of Snowdon. All this puts him 18th in line to the British throne. But Linley is royal only by default: He is far more interested in pursuing his calling as a tastemaker. After studying furniture making at the Parnham House School, he set up his own furniture company, now called Linley, in 1985. In 2006 he joined the auction house Christie’s and is now its chairman for Europe, the Middle East, Russia, and India. At 55 he keeps a busy schedule, crossing the world in search of objets d’art for the auction house while still maintaining a creative role and financial stake in Linley, which designs upholstery and accessories as well as furniture. Outside work, he lives with his wife, Serena, and two children in London, the Cotswolds, and Provence. Robb Report met Linley at his Christie’s office: a green-wallpapered room presided over by a portrait of his mother (painted by Pietro Annigoni) and two Damien Hirst paintings.

Christie’s celebrates an important anniversary this year. How did you become involved with this heritage brand?

I joined 10 years ago, but my association began a long time before. I had my first exhibition here in 1985, so we go right back, and it gave me the impetus to form my company, then David Linley Furniture. I’ve always had friends here, including Orlando Rock, the UK chairman and my son’s godfather. It’s a very collegial place to work, from the porters to the clients, and having been brought up by my parents to drift in many worlds, I particularly enjoy the places it takes me. Last week I went to New York to talk to writer Walter Isaacson. I really enjoy the whole art-world milieu. It’s a meeting place of amazing personalities.

Three years ago we sponsored an exhibition at Houghton Hall in Norfolk, showing pictures sold to Catherine the Great 350 years ago by our founder James Christie—and we found the original drawings. To me that’s a very exciting illustration of how Christie’s has evolved, and it’s fascinating to see how collections have been made over the years. I also enjoy taking people on studio visits: Damien Hirst very kindly showed us around recently. It gives collectors a fresh idea on what creativity entails, and I personally love to see people making things.

What are some of the changes in the worlds of art and collecting that you have witnessed?

The shifts in taste amaze me. There are so many new collectors, and their confidence in putting out their collections is happening in a way that has never previously happened. Look at the Broad [in Los Angeles] and the wonderful [Long Museum] in [Shanghai,] China, with the most magnificent impressionist pictures in it. Who would have guessed 20 years ago where that buyer [Liu Yiqian] would come from? His fascination with culture, his hunger for education—and the coffers to build a magnificent museum—is inspirational.

In a society so focused on youth and technological novelty, what role will heritage hold for subsequent generations?

I think it’s incredibly important—more so than ever. Christie’s is bringing together younger collectors who often have limited experience of the art world for dinners, lectures, social occasions to meet artists, architects, craftspeople. It’s about immediacy as well as heritage. It involves all parts of the world, and we find people’s appetites have really broadened.

Was the art world always this accessible?

No. About 30 years ago, I remember not being allowed into the Grosvenor House Art & Antiques Fair. Eyebrows were raised: What was a furniture maker doing there? But it’s changed. A few years ago, I introduced our old-master expert Noël Annesley to a Chinese artist called Chen Tianzhuo, and he was surprised to be having a conversation with a contemporary artist about an old-master drawing. You can’t pigeonhole people so easily any more.

What about selling objects that are not fine art?

Personally, I find the world of memorabilia fascinating: how people get so focused on one genre, music, or person. But the trend is that our typical collector is now interested in seven to 10 categories. You don’t say of someone, “He’s an old-master collector” anymore. There’s all sorts of cross-category buying.

We hear constantly that artificial intelligence and robotics will make us obsolete. What of the human touch?

I think there’s a revolution going on. More and more our world is made up for us. Our computer tells us what to do, and there’s a sense of frustration. With my Linley hat on, we ran a crafts school in the West Country this summer, and it was oversubscribed with second-careerists, people straight out of school and collectors, all wanting to know about making. In the last 5 years we’ve become disconnected in this extraordinary way, and there’s a huge desire for tactile knowledge.

What makes an item produced by hand and imagination—a table, a drawing, a piece of jewelry—so special?

There’s a real hunger to understand where objects come from, how artists show their understanding of materials. And there’s something fascinating about watching people work, whether it’s someone engraving a gun or sewing beautiful clothes together. I know that myself; I’ll make a piece of furniture and feel the wood’s grain talking to me. That may sound weird, but I remember selling some pieces to a very well-known interior designer who, before buying furniture, said, “I’ll wait to see the grain.” That sense of surface texture and line is more vital in our mechanical world. In Sicily the other day to see the ruins, I found it unbelievable that those columns were made by eye and hand.

Who are some of the artists and craftspeople you most admire, and what have you bought lately?

I love collecting, but it has to be small like this Sergey Chekhonin [illustration], as I have very little space at home. Mostly, I collect artists who are very dear to me—and students. I’ll never forget someone buying something of mine when I started. I do like watches, too. The way a mechanical object works is an indulgence that I find delicious, and I bought this Nautilus Patek from Christie’s Dubai about 4 years ago—​a watch now celebrating its 40th birthday. I have a Fiat 500 that’s wonderful: a very humbling object. And I like collecting guitars and old records, because they remind me of parties at home with my parents. I play three chords—all you need for rock and roll.

What about emerging markets? Are there any stones left unturned?

Definitely. As the world matures, there are really exciting changes. In new markets like Africa there are enormous opportunities, and we just hosted a wonderful exhibition of African art at 1:54 art fair. We’re helping the collector Jochen Zeitz with his museum of contemporary African art in Cape Town, designed by [UK architect] Thomas Heatherwick.

What compelled you to become an artist yourself? What was your inspiration?

Firstly, my school, Bedales. I had my first exhibition there in 1976—it was very much the turning point. Then John Makepeace. He was a wood designer leading the Parnham House School, which I attended from 1980 to 1982, and he gave me the opportunity to make furniture in the 18th-century manner and was clear that a machine can be used but that it’s the part you touch where the emotion happens.

Were your parents an influence?

Yes. I remember my father making many things. Once we made a shed, and a man in the village came along to help. After a couple of glasses of beer, he said, “Give me a tape measure and I’ll make it by eye,” and the result was so beautiful. My father made the cooker hood to be seen in Kensington Palace. I was very lucky to be brought up in that era, where my father designed the Snowdon Aviary [at London Zoo] and the Prince of Wales’s investiture where my father painted all the chairs red and made the canopy for Her Majesty from Perspex. It flew away the night before—there was quite a lot of swearing going on. I owe my work ethic to him.

When you think of your personal legacy, what would you like it to be? And do you make any work now?

A lot of my pieces have involved teamwork, but hopefully they’ve inspired people to make things—that inspiration would be a great legacy. Also, the way we treat customers is memorable, part of the very process of luxury. As to my own work, I tend to do restoration jobs at present.

As it is the holiday season, what do you like to give—or receive?

Every year, Linley makes boxes that make great gifts. We also put in a couple of items we like because they’re funny and inexpensive, like a little doorstop. As for me, world peace would be wonderful.