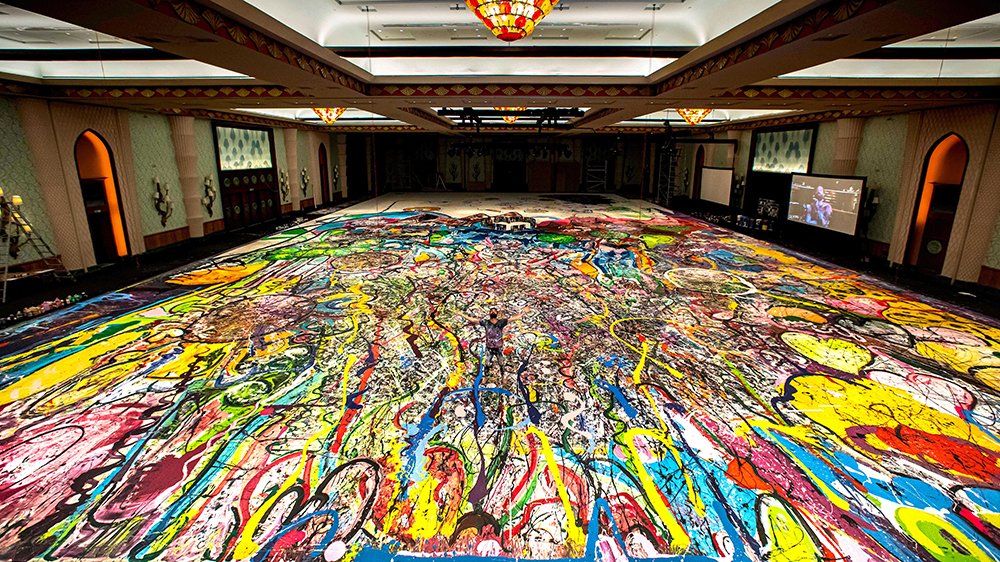 Size apparently does matter—at least for one painter, whose latest work is poised to break a world record and make millions for charity in the process.

British contemporary artist Sacha Jafri is currently working on what will be the world’s largest canvas painting. When the artist finishes the 21,000-square-foot The Journey of Humanity next month, he intends to cut it up into smaller segments to be sold at auction, according to Jafri’s website. His goal: to raise at least $30,000,000 for children in need.

Jafri was visiting the United Arab Emirates five months ago when the coronavirus pandemic first started to spread around the world. Stuck in Dubai once the country introduced lockdown measures, he decided to do what he does best and began working on the massive painting—which is the same size as two full-sized football fields or four basketball courts—in a cavernous conference room at the luxurious Atlantis, The Palm hotel.

Painted in his self-described “magical realism” style, the painting is meant to convey feelings of connection, separation and isolation brought on by the pandemic. In addition to Jafri’s trademark brushwork and drip painting, the piece also features eight “portals” that incorporate art created by children from around the globe. The children’s work was submitted through the artist’s website.

Sacha Jafri and ‘The Journey of Humanity’  Pyong Sumaria/Atlantis, The Palm

By the time the project finishes next month, Jafri is expected to have spent 24 weeks painting The Journey of Humanity. At that point, the sprawling canvas will be cut into 60 pieces, each measuring around 100 square feet and individually framed so they can be sold at an auction scheduled to be held in Dubai in December. Jafri told CNN last week that he could see some pieces going for upwards of $4 million.

“We are aiming to raise $30 million, which will go to help the poorest children of the world with education, connectivity, health and sanitation,” he told the network. “Each person that buys a panel will (not only) own a piece of the largest painting ever created in the world, but they’ll own a piece of history, because what we’re doing with that money is huge.”

Proceeds from the sale of The Journey of Humanity will go to benefit Humanity Inspired. The initiative partners a number of charities, including Unicef and Unesco, with the goal of helping children worldwide, specifically in bridging the digital access gap between industrial and developing nations.