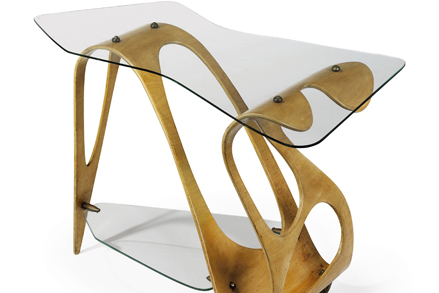 “Everything is permissible as long as it is fantastic,” designer Carlo Mollino (1905–1973) once said. His Arabesque table, made of laminated plywood and glass, will be a highlight of Christie’s Important 20th Century Decorative Art & Design auction on December 16 in New York. The sale, offering furniture and objects spanning several periods and styles over the past century, also includes Carlo Bugatti’s 1907 silver dragonfly-motif tray, a 1963 bronze chair by Diego Giacometti, and Ron Arad’s 2002 All Light Long table. Mollino’s 1949 Arabesque table is expected to bring in between $800,000 and $1.2 million: his 1949 oak-and-glass trestle table sold for $3.8 million at Christie’s New York in 2005, setting an auction record for 20th-century furniture. The entire auction is expected to bring in between $3.3 million to $4.8 million. (Christie’s, 212.492.5485, www.christies.com)