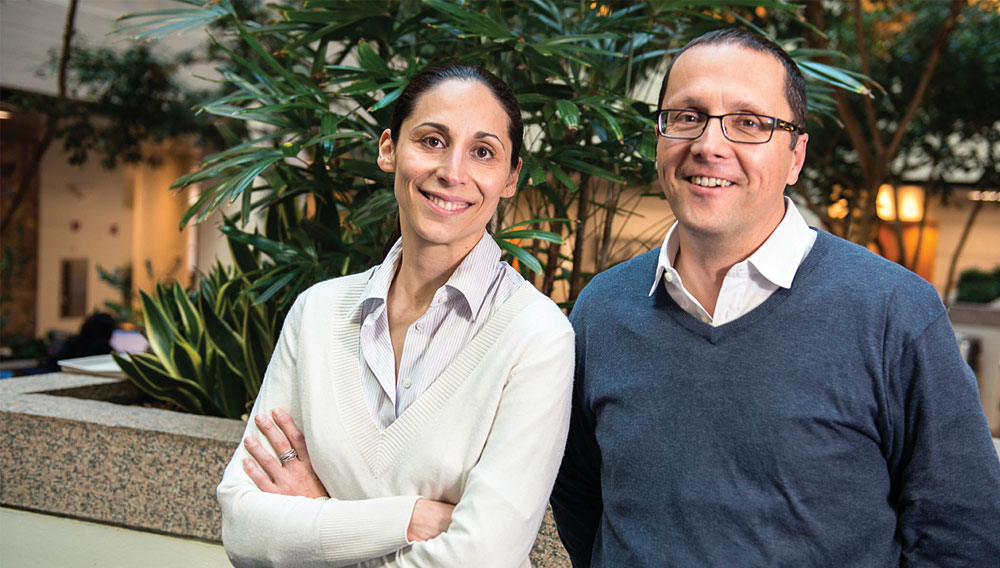 For newlyweds Peter Mundel, MD, and Anna Greka, MD, PhD, the most wonderful wedding gift was learning that a paper they co-authored was accepted by the New England Journal of Medicine (NEJM). Greka doesn’t wish to talk about the details of the wedding; she much prefers to discuss the excitement surrounding their research and what it means for the future of their field.

For the past three years Mundel, an investigator, and Greka, an investigator and nephrologist, both of the Division of Nephrology in the MGH Department of Medicine, have been working with other MGH colleagues on what may be the first targeted treatment for kidney diseases. Mundel began the study nearly 10 years ago when many doubted him. He persevered, and all the pieces fell into place when he started collaborating with Greka.

“We had the biology,” says Mundel. “But it’s all about bringing it back to the patient. When I met Anna – who is both a scientist like myself and a practicing physician – she could understand the relevance of what we were doing and how this could translate to a treatment for patients suffering from devastating kidney diseases.”

The research team found that abatacept, a treatment approved for  rheumatoid arthritis, appeared to induce remission of focal segmental glomerulosclerosis, a common form of kidney disease that is difficult to treat and often leads to kidney failure. In the study, published online Nov. 8, the drug prevented four patients from losing transplanted kidneys. However, it was the fifth patient – Greka’s patient – that Mundel says, “clinched and convinced” the reviewers at the NEJM. “When someone receives a transplant they already have huge amounts of medications in their system,” says Mundel. “With the first four patients in the study, it was difficult to parse out which of the treatments was ultimately the one that worked. Anna’s patient was a clean slate because she had never received a kidney transplant.”

Greka’s patient had suffered from high-risk, treatment-resistant kidney disease for 20 years. With monthly doses of abatacept she went into remission for the first time in more than a year and continues in remission a year later.

“It is a promising therapy,” says Greka. “Here we are trying this new drug, and all of a sudden, this patient is seeing not only a great benefit in terms of her kidney health, but also a major change in her quality of life. We actually have a targeted treatment based on a biomarker that helps us determine which patients are most likely to benefit. We have a lot of work ahead of us to validate these results in clinical trials, but it’s a very exciting time – truly the beginning of a new era.”