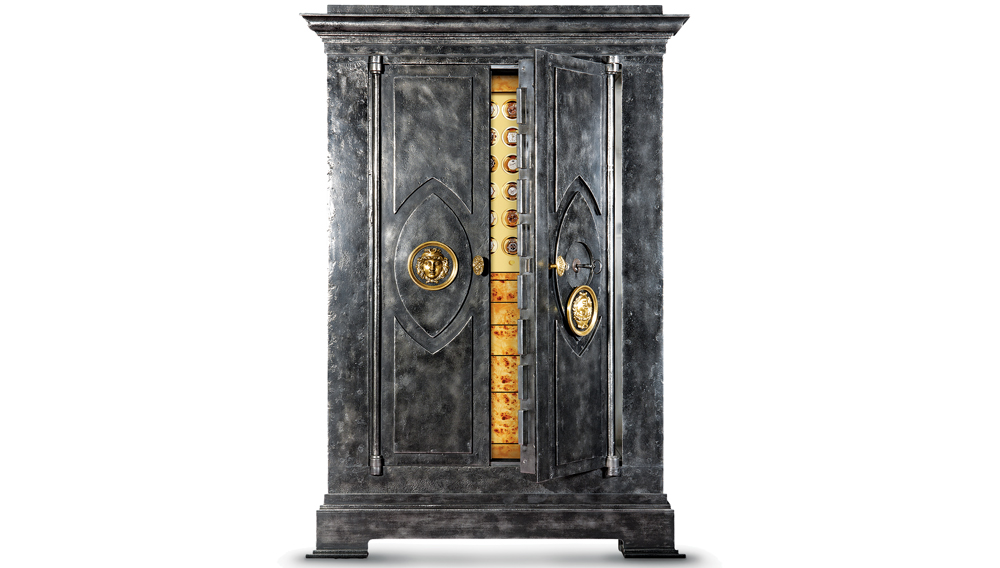 It is believed that during his reign as the king of Italy from 1861 until his death in 1878, Victor Emmanuel II kept love letters from his longtime mistress, Rosa Vercellana, in a safe that he had commissioned specifically for that purpose. Three years ago, during the demolition of a house in southern Germany, the safe was discovered. The German company Döttling acquired it, restored it, and is now offering it to Robb Report readers for purchase and personalization (starting at $340,000).

The safe’s inner doors feature a pair of opulent brass ornaments surmounted by the king’s coat of arms and a crown. Hidden beneath the crown and within heart-shaped crests are engraved roses—a coded nod to Signora Vercellana. The two medals on the safe’s exterior are believed to be portraits of Rosa in her youth. A mechanism moves one of the medals aside to reveal the keyhole for opening the safe. “Rarely have [we] seen so much passion put into decorative details, combined with an obvious desire of the manufacturers to keep safe what [was] inside,” says Markus Döttling, the firm’s managing partner.

The safe’s recipient will have the chance to meet with Markus Döttling to discuss the interior’s customization. It can be converted into a humidor, a gun safe, or a mini bar. Or it can be used for its original purpose: storing precious documents. The safe is depicted here with an interior that can hold 42 watches and includes 10 drawers with fronts fashioned from polished poplar burr wood.

The company has kept the safe’s original locking mechanism but added an up-to-date security system. It includes seismic microphones that are capable of detecting vibrations indicative of a break-in attempt and sounding an alarm.