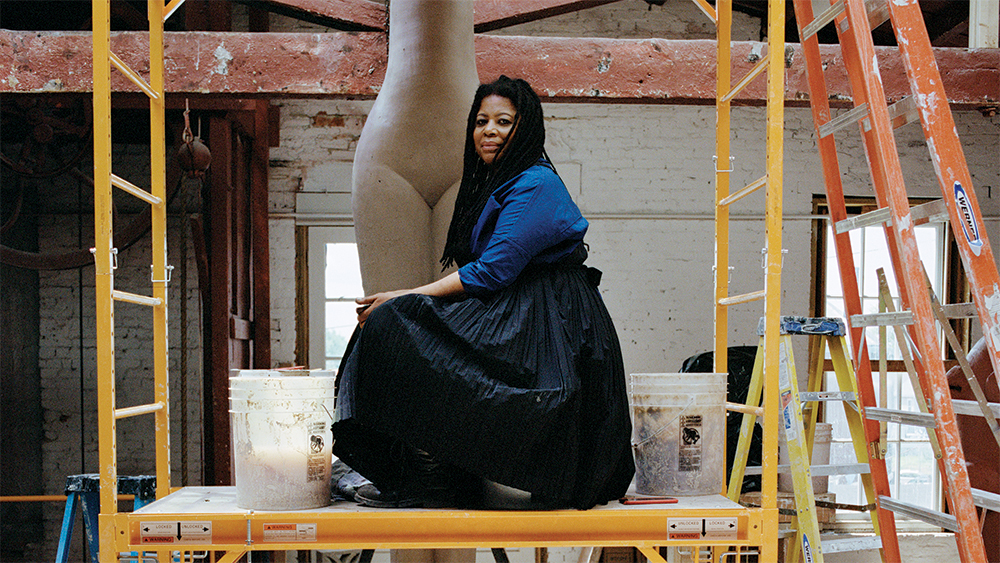 Courtesy of the artist and Matthew Marks Gallery

The United States Pavilion in the Giardini di Castello, home of the Venice Biennale, was erected in 1930, as fascism was rising in Europe and Jim Crow laws codified white supremacy across much of the US. When the 59th edition of the preeminent international art exhibition opens this month, Simone Leigh will be the first Black woman commissioned for a solo presentation in that space, built to showcase the best America has to offer. The art world can’t wait.

Leigh is acclaimed for her towering figures of Black women, typically sculpted in ceramic and enveloped by voluminous skirts of raffia, with references ranging from Velásquez’s Las Meninas to traditional African dwellings and Mammy’s Cupboard, a Mississippi restaurant that could be described as blackface architecture: Patrons eat inside the giant “Aunt Jemima’s” brick skirt. Often missing eyes and ears, Leigh’s women seem impervious to such racism or vestiges of colonialism.

“If one spends a lot of time thinking about historical precedents, absences, urgencies, stories told and untold, there are layers and layers of depth to plumb in Simone Leigh’s work that are of critical importance,” says Jill Medvedow, director of the Institute of Contemporary Art Boston, which proposed and organized the American entry.

Simone Leigh working on one of her sculptures.  Courtesy of the artist and Matthew Marks Gallery

Leigh’s much-anticipated show will include ceramics as well as bronzes, which were cast from her full-scale models—an unusual, labor-intensive approach. But then again, a theme of her oeuvre is the recognition of Black women’s historically unacknowledged labor. “You see and feel the touch of her hand on every work,” says Medvedow, who describes Leigh as “an artist at the height of her power” and adds that the show’s title, Simone Leigh: Sovereignty, “just stamps it with these themes of self-determination, both of the individual and the collective.”

Medvedow says one needn’t be an expert to be captivated by Leigh’s sculpture. “The power, the scale, the materials—the beauty—are equally compelling,” she notes. “I think her work will grab and speak to this broad audience.