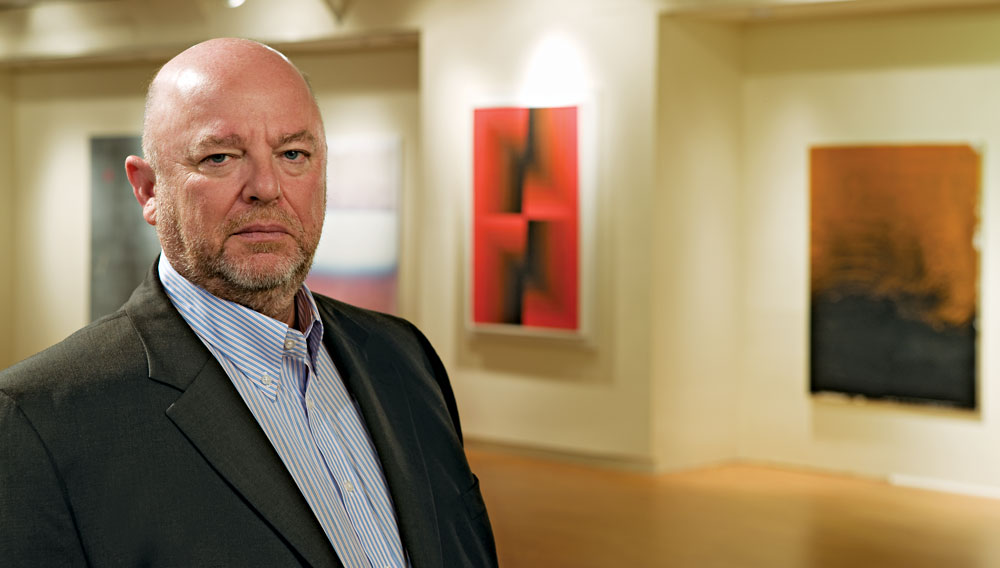 A high-energy Champion of emerging artists, Dean Valentine began collecting just 16 years ago but quickly became an independent collector to watch. He was among the first to appreciate Takashi Murakami and John Currin, and his sharp eye regularly lands him on ARTnews’ list of the world’s top 200 collectors.

Born in Bucharest, Romania, and raised in Queens, N.Y., Valentine is a Los Angeles–based television mogul who now directs his own media-investment firm. Having amassed far too many objects to display at his home in Beverly Hills, he donated 55 sculptures to the Hammer Museum at UCLA, where he is on the board of overseers. More recently, he set up Bowmont Art, an exhibition space at West Hollywood’s Pacific Design Center that he hopes to develop into a lively arts center. —Suzanne Muchnic

I began collecting around 1995, when my dad was sick in New York. I was with Walt Disney Television, and with the three-hour time lag, I found myself wandering into art galleries. One day I stumbled upon a piece by a Russian émigré artist, Yuri Kuper, in what would now be considered a fairly crummy gallery. That one thing—a gouache-and-chalk work on an old piece of blackboard—opened the floodgates, and ever since, I’ve been collecting. I had this realization that art wasn’t fundamentally decorative objects; it was really a metaphoric way of communicating.

Other than the primal thing—I know it when I see it—I look for originality. I want something that jumps up above the baseline of the other 50,000 things I’ve seen. I’m attracted to art that’s layered and complex, and has intellectual and emotional force. It gets harder to find, but there is always something I have missed, or the Western canon has missed, or the art market has missed. And that’s a lot of fun, that cross between connoisseurship and detective work.

I’ve always had an ambivalent relationship with buying stuff; it seminauseates me. But I’m not ambivalent about collecting and supporting art that I like. I’ve tended not to buy things that were much over a couple hundred thousand dollars. When something is much over that, it’s been picked over by the art world and played around in the art market. I have much more fun with art that hasn’t been validated yet, because I get to be part of that validating process. Once you are spending a million or a couple million, it’s a very different set of considerations.

Art consultants are valuable to people who just don’t have time, but I like to make the time. Art magazines are a good place to start—Artforum, Frieze, Flash Art. And I always go to as many galleries as I can and talk to the people who own them. I’m not shy about asking questions. If I don’t understand something, I’ll say, “Why is that good?” I don’t think there are dumb questions.

But probably the most important thing I do is talk to artists. It’s really artists who determine the canon of art history—not writers, not collectors, not galleries. It’s artists talking to each other, and that dialogue is really what creates art. We kind of overhear it. The most useful thing for me is to ask artists who they like, what they are looking at, and which of their friends are making good work.

For a long time I collected John Currin, Murakami, and all this stuff that was really hot art. Even though I have enormous respect for a lot of those people, they don’t really do anything for me emotionally anymore. My great passion for the last four or five years has been conceptual art of the early ’70s. I really got to care about things by artists like Al Ruppersberg and Douglas Huebler. There are also young people who really turn me on, like Alex Hubbard, Kaari Upson, and Adrian Ghenie.

I’ve had enormous fun putting up stuff at the Pacific Design Center that no one has seen. It’s mostly work by younger, emerging artists, and some of it reflects the darker, European part of my personality. Liz Craft’s Death Rider is such a cool piece. And the Monika Sosnowska Doors—it is to doors what Russian dolls are to dolls. The work consists of a standard white door inset into a wall. When you open it, it reveals another door, exactly the same but a bit smaller. When you open that door, it reveals in turn another door, exactly the same, but smaller still. And so it goes, until you’re bending down and opening the last tiny little 3-inch door, which opens onto whatever is behind the whole wall. I take it as a memorial to all Grand Ideas—and a warning that their illusions lead nowhere.