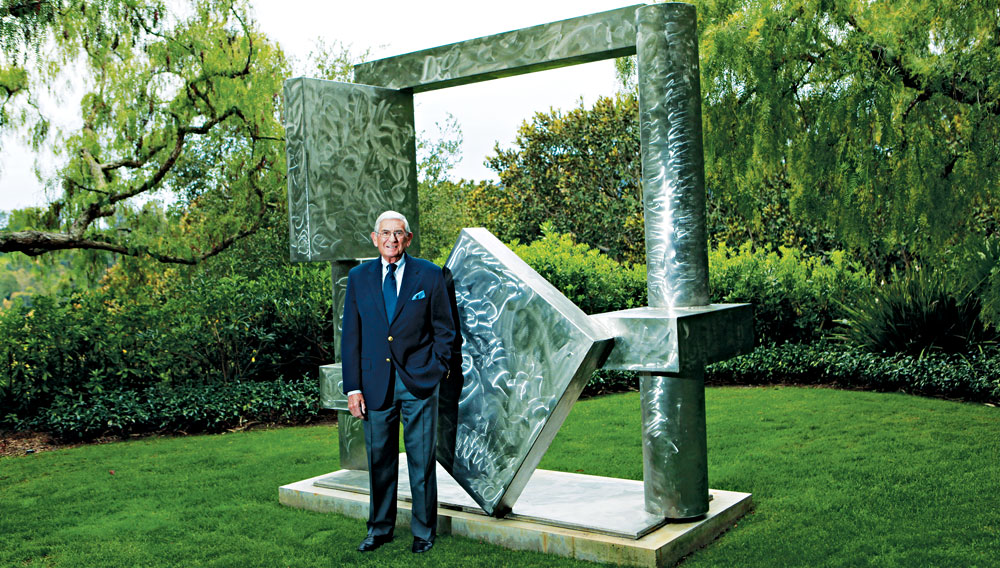 Los Angeles’ biggest patron of the arts is Eli Broad, the billionaire philanthropist and megacollector. Anyone who doubts this will find supporting evidence all around town: He is a founding chairman of the Museum of Contemporary Art and bankrolled the Broad Contemporary Art Museum at the Los Angeles County Museum of Art; he provided major funding for the Broad Art Center at UCLA; and he established the Broad Art Foundation in Santa Monica, which lends art to museums and university galleries worldwide.

His latest venture, expected to open in 2013, is The Broad, a dramatic downtown museum designed by Diller Scofidio + Renfro that will showcase the works he has amassed with his wife, Edythe. Broad, 78, made fortunes in tract housing, insurance, retirement services, and financial products, and along the way acquired more than 2,000 postwar and contemporary works at a cost that he puts somewhere between $200 million and $400 million. “I don’t pretend to have an eye that’s ahead of everyone else’s,” he says. Yet he and his wife have been on ARTnews’ list of the world’s top 10 collectors since its inception in 1998.

His advice to new collectors is simple: Invest your time before you invest your money. “Go to museum shows. Go to galleries. Get the catalogs,” he says. “And then go further. Get educated.” —Suzanne Muchnic

Genesis of a Collector

Edye was the first collector. She bought prints and drawings, works by Braque and Picasso, a poster by Lautrec. I got involved around 1973, out of curiosity. The first significant thing we bought together was a Van Gogh drawing, but we didn’t get that active until about 1979 or 1980. Then we moved into contemporary art and spent a lot of time in SoHo and the East Village in New York. Among the things we collected early on was Jean-Michel Basquiat, who was working and living in the basement of Annina Nosei’s gallery. We saw all this work that was graffiti-like, but a lot of thought and interesting things went into it. It wasn’t like a tagger’s work. So we got to know Jean-Michel and bought about 12 of his works within three or four years.

One day we wandered into Metro Pictures in SoHo, went down in the basement, and there was work by Cindy Sherman. I didn’t know who she was, but somehow I was really attracted to her work, because it wasn’t just photography. We bought a number of her photo stills in 1982. Each year, she moves forward and does other things, which led us to have the largest collection of her work anywhere, about 120 photographs.

We also befriended Keith Haring and Roy Lichtenstein and started buying their work. It’s been a great learning experience, a way to enhance our lives. Life would be boring if we spent all our time with other business people and lawyers and bankers. Artists have a different view of the world. And I like to think that civilizations are not remembered by business people or bankers, but by the artists and architects.

We pretty much do our own scouting, so the biggest investment we have made is in time. I get three art magazines. I read The New York Times. Wherever we are in the world, we go to exhibitions. I’ve got far too many art books, probably a thousand. Before we acquire something, we do a lot of homework.

We prefer to buy work of current artists, which means buying from dealers, and we are respected by artists and dealers, because we don’t sell. A lot of artists would rather see us buy a work and lend it than have a museum own it and show it 5 percent of the time, so we have been able to buy work that other people stand in line for. And we’ve often bought work before it’s fabricated.

We bought our first work by Jeff Koons, Three Ball 50/50 Tank, at auction. Then we visited him at his studio and agreed to buy Balloon Dog and Cat on a Clothesline from his “Celebration” series. We advanced him a little over $1 million before he started them, and it took about five years to get the work. During a period when Jeff’s work was not in great fashion, he had a son who was supposed to stay in the United States, but his mother, an Italian porn actress and legislator, took the child to Italy. Jeff was spending lots of money on lawyers, so he asked if we would buy Rabbit, Michael Jackson and Bubbles, and a case piece—all were artist’s proofs—for a seven-figure amount, which we did. We now have 24 works, and we consider Jeff a good friend.

Our Cindy Sherman collection, size-wise and quality-wise, is without peer. The same thing with Jeff Koons. We have 14 works by Cy Twombly of relatively high quality, so we feel very good about that too. We were also fortunate to buy works by Jasper Johns, Robert Rauschenberg, and other important artists that had been in other collections.

I first saw David Smith’s Cubi XXVIII at the Modern Art Museum of Fort Worth, and I thought they owned it. But one day, it appeared at Sotheby’s. I had been looking for a “Cubi” for years, so I had to have it. I paid more for that [$23.8 million] than probably anything I have ever bought.

If I were starting over, I would collect drawings. They are the essence of what an artist has in mind. I think a collection of drawings is really an intellectual pursuit.