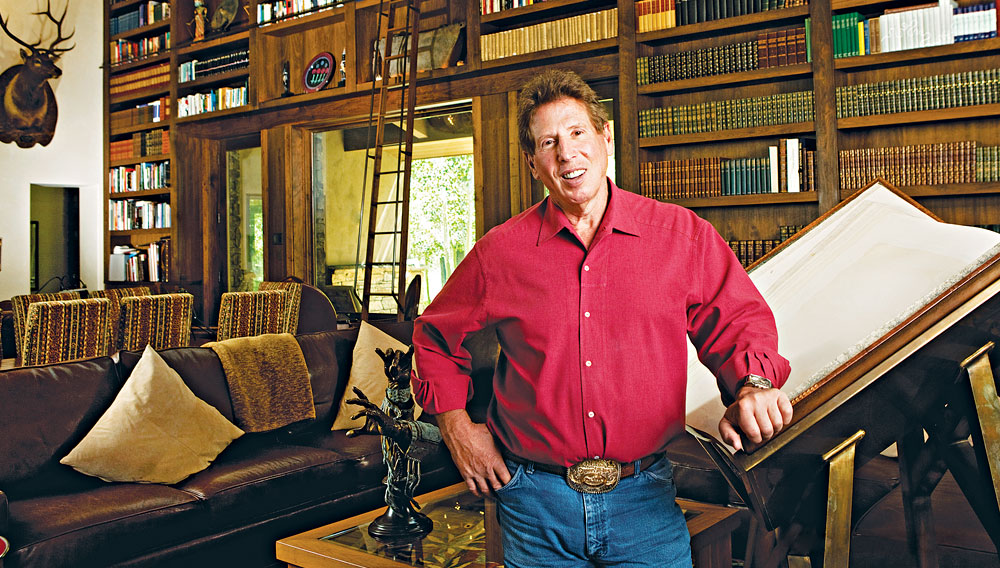 Unusual among book collectors because he did not grow up in a book-laden household, Dr. Gerald Dorros also did not begin collecting until he was in his late 50s. But since starting in 2000, the cardiologist, now 69 years old, has assembled a wide-ranging library that contains Western Americana, children’s titles, literary classics, and

American political works from before 1812. His most valuable volumes include a first edition of Lewis and Clark’s expedition report, several rare hand-colored books on birds, a first edition of Charles Darwin’s On the Origin of Species, and what might be the finest privately owned copy of the first printing of Thomas Paine’s Common Sense. He is unsure of the size of his library, which he keeps at his home in Jackson Hole, Wyo., but says he would not be surprised if it exceeds 10,000 volumes.

Dorros—who grew up in Queens, N.Y., and graduated from Dartmouth College and from Yeshiva University’s medical school—is a pioneering cardiologist who was among the first to perform coronary angioplasty in the United States. Besides his work, which includes teaching and writing about cardiology, he also enjoys riding cutting horses in rodeos and spending time with his four children and five young grandchildren. —Sheila Gibson Stoodley

My collection doesn’t include any major medical books except for an atlas of human anatomy that I got in Paris years before I started to collect books. I got it, and I never looked at it again. But it’s in the collection. I know medical history a little bit from my work in cardiology, but it really wasn’t where I wanted to go as a book collector. I didn’t want to stay in my comfort zone.

My collection is diverse, but it’s not unstructured. It’s very focused. I always wanted to be a cowboy, so I wanted to learn about the history of the American West. My collection includes books about the exploration of the Pacific Coast and the borders of the American West, and the Louisiana Purchase and how it affected the development of the West. At the same time, as you start to read about Thomas Jefferson, who orchestrated the Louisiana Purchase, you feel the need to understand more about American political thought.

In the mountains of Jackson Hole, where I ride horses, there is a large number of bird species. That’s partly where my interest in ornithology comes from. I also travel a great deal, to East Africa and all over the world, for pleasure and for work—teaching and operating on patients. And when I do travel, I look for different types of birds. So ornithology is part of my traveling experiences. I’m also interested in illustrative books about India and other places that I travel to.

I don’t bid for books at auction. I don’t want to pay 15 percent on either side of the exchange. I’m joking about the buyer’s premium and the seller’s commission, but I don’t have any reason to buy books at auctions. There are a few very honest, very good book dealers, such as Bauman Rare Books in New York, who do an excellent job. I may pay a premium for the books, but I know what I’m getting, and it’s a better relationship for me. The dealers know what I need, and they’ll look for what I need, and we’ll find it.

I don’t consider any one of my acquisitions better than another, because every book is so different. It is like asking which of your children you love the most. I can tell you that the books that are most interesting to people who visit me are one detailing the flora and fauna that Lewis and Clark encountered on their expedition and the ones that were in the libraries of Thomas Jefferson and George Washington. My books are open and available to my children and my grandchildren. Nothing is hidden away. My library is not behind locked doors. But there are rules. When I introduce my grandchildren to one of my illustrated books on birds, for instance, everybody has clean hands, and everybody has to be respectful. We sit down at a table, and I say, “These are the books. We can’t touch them too much, but I want you to look at the pictures and tell me what you see.”

I look through my books containing maps of places in the Pacific Northwest that were documented by Spanish explorer Juan Pérez and British naval officers Nathaniel Portlock and George Vancouver, each of whom explored the Pacific Northwest in the late 18th century, and realize that these guys had courage. Forget about Star Trek. These guys were really going where no man had ever gone before. They had no idea where they were going, but they were willing to take that risk.

I see a connection between exploring new territories and practicing medicine. I was the third person to do coronary angioplasty in America, and my patients were among the world’s first 100 to undergo angioplasties. I’m the guy who started to do angioplasty outside of the heart, as a treatment for peripheral vascular disease, so I was exploring what could and could not be done within the body.

I don’t use a Kindle. My kids gave one to me, and I gave it to my wife. I carry books. Even if they’re heavy, I carry them. I have no issues with the Kindle. I think it’s great that people read. But I personally like books.

The advent of digital books will affect the value of printed books. Scarcity produces a situation that raises prices. It’s a matter of supply and demand. There are going to be fewer books, and they are going to become more and more rare as they are collected.

But books will be here forever, regardless. Call me old-fashioned, but I think publishers are going to continue printing books, and they’re going to keep providing people with enjoyment.