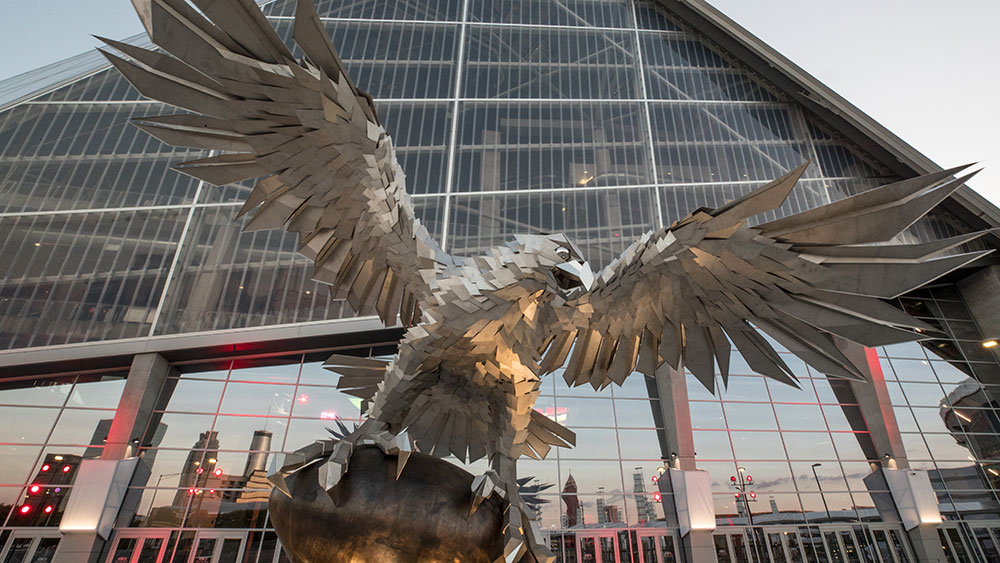 This fall, the Chase Center in San Francisco will become the new home of the NBA’s Golden State Warriors, replacing Oakland’s beloved Oracle Arena. The new building is chock full of modern amenities, including luxury boxes and suites, and high-end concessions. It will also feature the sports world’s newest amenity: fine art.

Sculptures, paintings and video art aren’t just for galleries and museums anymore—or even the public square. Works of art have become de rigueur at new sports venues, popping up in the plazas outside of stadiums, decorating the concourses within and even on the jumbotrons. In Arlington, Texas, Dallas Cowboys owner Jerry Jones has filled AT&T Stadium with over five dozen pieces of world-class art, including Ellesworth Kelly’s White Form and Anish Kapoor’s Sky Mirror, the latter of which cost $10 million ($13 million if you include the surrounding black granite fountain). Atlanta’s Mercedes-Benz Stadium, home to the NFL’s Falcons and the MLS’ Atlanta United FC, opened in 2017 and features 180 works from 50 different artists, the highlight of which is Gábor Miklós Szőke’s Rise Up, the world’s largest avian sculpture. Although a price for the statue has never been made public, it weighs over 73,000 pounds and took Szőke two years to design and build. Other stadiums with proud collections include Hard Rock Field in Miami, US Bank Stadium in Minneapolis and Lincoln Financial Field in Philadelphia.

When it opens with a Metallica concert in September, the Chase Center will have about 40 pieces of art on display. The highlights of the burgeoning collection include a 324-inch-long metal mobile by Alexander Calder and Play Sculpture by Isamu Noguchi, both of which are on indefinite loan to the arena from the San Francisco Museum of Modern Art for an undisclosed amount of money.

So what exactly is the reason for the high-minded trend?

As you might expect, the relatively sudden proliferation of fine art at billion-dollar stadiums and arenas isn’t borne entirely out of goodwill. According to artnet News, the artwork isn’t just there to enrich the fan experience or elevate the stadium aesthetics. It comes down to dollars. The works are intended to imbue the buildings with upmarket cachet in order to make make them more attractive for rentals when the home team’s not in town or it’s the off-season. Owners and operators of these state-of-the-art venues hope that they can lure in (very) well-heeled clients who are looking for a giant venue to host their next birthday party, wedding or corporate event.

Of course, the fact that arenas are paying museums for the right to “borrow” their art brings up some prickly questions about whether or not those institutions should be able to rent out their collections for profit. Neither the American Alliance of Museums nor the Association of Art Museum Directors have come out and actively discouraged the practice so far. In fact, some in the art world see the trend as a good way to expose the public to art.

“The more people who are able to see and enjoy art, the better,” Douglas S. Jones, director of the Florida Museum of Natural History in Gainesville and former board chairman of the American Alliance of Museums, told artnet. “The stereotypical sports fan may never darken the door of an art gallery or museum, so if they get to see art this way it’s great.”

With arenas and stadiums continuing to build out their burgeoning collections, it would appear that art is here to stay as part of the modern stadium-going experience.  And considering how much public funding tends to go into these venues, that may not be a bad thing.