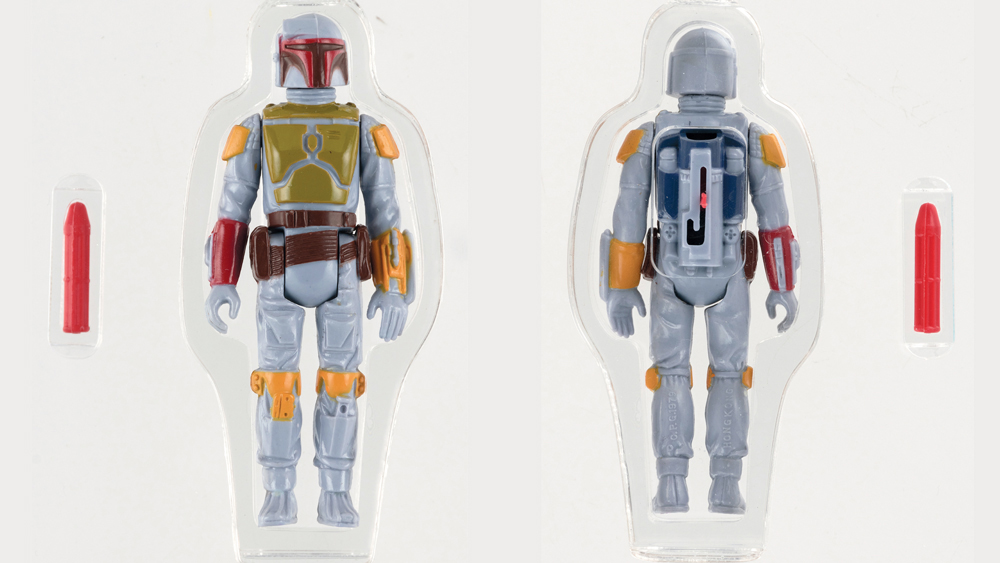 The Kenner toy company clearly didn’t know what it was getting into when it promised a Star Wars Boba Fett action figure that fired rockets from its backpack. In early 1979, Kenner tempted kids with a toy based on the bounty-hunter character, who was slated to appear in The Empire Strikes Back, the 1980 sequel to Star Wars.

The rocket-firing Fett couldn’t be bought in a store. Fans had to wrangle four proofs of purchase from other Kenner toys, mail them to a post-office box in Maple Plain, Minn., and wait six to eight weeks for it to appear.

When the blessed package finally arrived, it contained a Boba Fett toy, sure, but not the promised version: Its rocket was fixed in place, unable to fly. Kenner had struggled for months to design something that fired rockets safely and failed. The death of a four-year-old, who had choked on a missile from a Battlestar Galactica toy, probably helped persuade the company that it wasn’t such a great idea anyway.

If Kenner had offered a plain Boba Fett in stores, with no rocket-launching backpack and no marketing buildup, it would have remained just one among many Star Wars products it released in the late 1970s, and maybe the bounty hunter would be just one more villain in the Star Wars universe. But the hype and the letdown helped to make both legendary. Now those kids who didn’t receive what Kenner promised 40 years ago have grown-up money—and they’re spending it aggressively.

The world auction record for a Star Wars action figure was broken three times between November 2017 and July 2019, and two of those were prototypes of the rocket-firing Boba Fett. By some estimates, Kenner created as many as 100 prototypes as it attempted to live up to its promise. (Former employees and their descendants seem to be the main original source for these figures.) The most recent record-breaker, which commanded $112,926, was doubly significant: It became the first Star Wars figure to cross the $100,000 threshold at auction.

All three records were set at Hake’s, an auction house in York, Penn., that has handled Star Wars toys since the 1980s. President Alex Winter says Hake’s will sell another rocket-launching prototype in its November 6 to 7 auction that is almost guaranteed to break the record again. Unlike the toy that triumphed in July, this one is fully painted with a less common firing mechanism. Winter estimates it at $200,000-plus. “This one is more desirable and infinitely more rare,” he says.

While the timing of these Star Wars auction records is right—people who fall in love with collectibles as kids tend to blossom into elite collectors in their 40s and 50s, no matter what the category is—another factor has stoked the market. Third-party grading (from the Action Figure Authority) entered the realm of action figures in 2000, and it’s had the same effect as it had on coins and comic books. After two decades, collectors have enough confidence to empty their wallets and chase the most highly graded examples.

Now those winning bidders, who waited forever for a toy they had been promised and never received, finally have it. Well, not really. Because the thing that makes the figures worth so much is the same thing that makes them worthless as toys. Once an action figure earns a high grade from the AFA, it’s sealed in plastic to preserve its value.

So, while owners can be sure their little Boba Fett will be worth the maximum to future collectors, the sealed-off toy will never truly satisfy the kid in them who checked the mailbox for weeks, hoping one day to prepare Fett’s tiny red plastic rocket for launch. Some things in life will always be just out of reach.