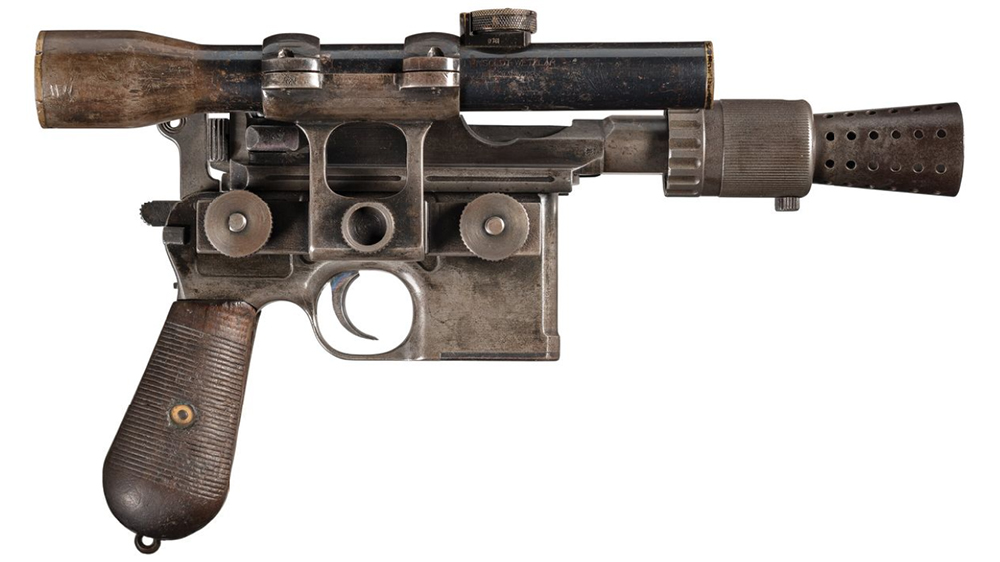 The blaster that helped the Rebel Alliance finally take down the Empire could soon be yours.

Han Solo’s DL-44 Heavy Blaster Pistol from the original Star Wars trilogy will be sold next month by Rock Island Auction Company. The weapon isn’t just a lovingly crafted replica, either. It’s the actual prop that was wielded by Harrison Ford on the set of the original film in the franchise, 1977’s A New Hope.

With the exceptions of Luke or Darth Vader’s lightsabers, there is no weapon closer to the heart of Star Wars fans than Han’s blaster. The DL-44 appears on screen for the first time moments after we are introduced to Ford’s character in Episode IV. The Millennium Falcon’s pilot can be seen wielding the weapon during his shootout with Greedo in the cantina in Mos Eisley, but it makes several other appearances in the film, as well as in The Empire Strikes Back and Return of the Jedi.

This particular prop was used to film that infamous scene—there’s some argument over who shot first, though anyone who’s seen the original cut knows the true answer—but was lost after filming wrapped and labeled missing, according to a press release. It would be replaced by two other prop DL-44s for the filming of the next two entries in the franchise. This is the rediscovered original blaster, though, and has a letter of authenticity saying as much.

A New Hope isn’t the only time this prop showed up on the silver screen. Han’s blaster is actually a heavily modified Mauser C96 broom handle pistol which was used as a prop in several other movies, including the 1967 Frank Sinatra spy flick, Naked Runner. That means two of the coolest movie stars of all time have used the fake weapon.

Han’s DL-44 Heavy Blaster Pistol is scheduled to hit the block on August 27. The auction house expects the weapon, which comes with a signed photo of Ford, to sell for between $300,000 and $500,000. We wouldn’t be surprised if it sold for far north of that, though, especially since one of the replacement props used to film Return of the Jedi sold for $550,000 in 2018.

As Star Wars fans know all too well, the original is always better.