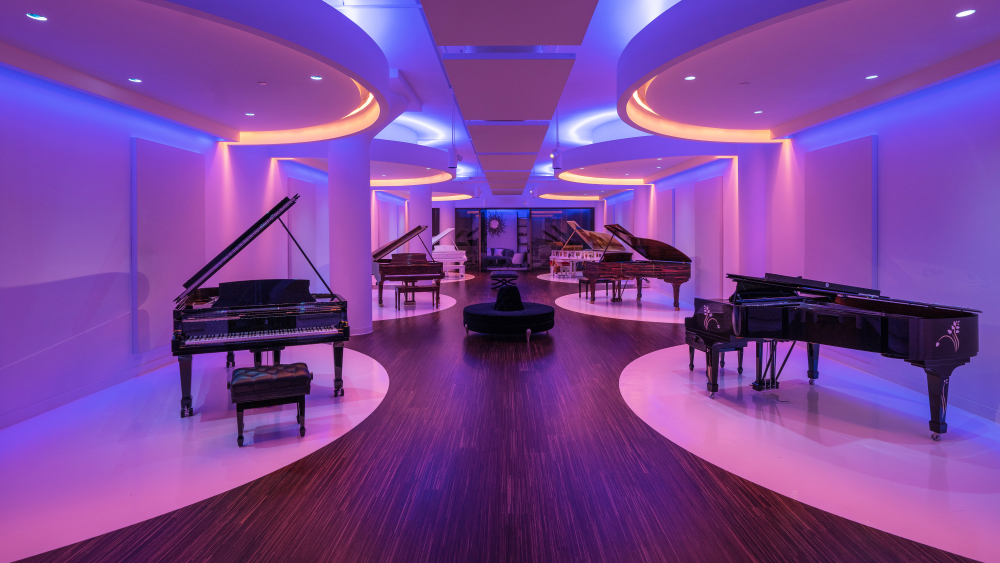 When Henry Engelhard Steinway immigrated to the U.S. from Germany in 1850, he certainly had ivories on the mind. But it’s doubtful the Steinway & Sons founder imagined a $2.5-million piano, much less a sleek, coolly lit showroom from which to view it all. Dubbed “The Vault,” the decidedly modern space in Queens, New York, houses the cream of the Steinway crop. But it’s only viewable to only a select few.

On a recent Thursday, Robb Report was given exclusive access to The Vault, as Todd Sanders, a vice president at Steinway, swiped us into the private room using a biometric fingerprint scan. After a moment in a small holding room, the safe door swings open, and like something out of Mission Impossible, Siri’s British cousin announces: “Access granted. Welcome, Mr. Sanders.”

The room is completely dark at first. Each piano is illuminated individually, with blue and purple lighting tailored to its particular finish. “We call them ‘vignettes,'” Sanders says. “So rather than turning all the lights on at once, we can keep the focus on one particular piece at a time.”

Currently, seven Steinway pianos are on view in The Vault, each limited edition. A John Lennon “Imagine” Model B Spirio sits in the lefthand corner, with reproduced Lennon doodles and, of course, a signature—created in celebration of the late musician’s would-be 70th birthday. The piano, which runs $217,000, features all-ivory ivories that were modeled after the original white Steinway Lennon gifted to Yoko Ono in 1971. Another standout among this exclusive crowd is the Lalique Heliconia Model A. Droplets of Lalique glass adorn the piano, styled as crystalline leaves upon swirling white branches. You can have this Model A for $199,000.

But if you ask us, The Vault’s crown jewel is the “Pictures at an Exhibition.” Named for Russian composer Modest Mussorgsky’s masterwork, the white Model D piano is crammed with art inspired by the 10-piece suite, from a painting of the “Great Gate of Kiev” itself to museum patrons observing, well, pictures at an exhibition. Even the witch Baba-Yaga makes an appearance, as the legs of the piano are sculpted into her clock hut—complete with claw-like feet—as a tribute to “The Hunt on Fowl’s Legs” movement.

The entrance to “The Vault.”  Photography by Gusto Multimedia

Sound enticing? The music-meets-art piano is all yours for $2.5 million. Should that prove discouraging, the rest of The Vault’s offerings clock in at around the $200,000 mark.

So, how does one gain access to this most sacred of piano sanctuaries? You might have to know a guy—and by that we mean a dealer. The Vault is invite only, and Steinway dealers alone hold the keys to the ivory kingdom. Reaching out to your local is the best bet for entry.

The “Pictures at an Exhibition” Model D  Photography by Gusto Multimedia

And when it comes to the more sonorous qualities of the pianos themselves, well, we’ll defer to the wise words of Thomas Edison on this one. “Gents, I have decided to keep your Steinway piano,” said the inventor circa 1890. “For reasons unknown to me, it gives better results than any so far [I’ve] tried. Please send bill with lowest price.”

Perhaps Edison would not have made The Vault’s cut after all.