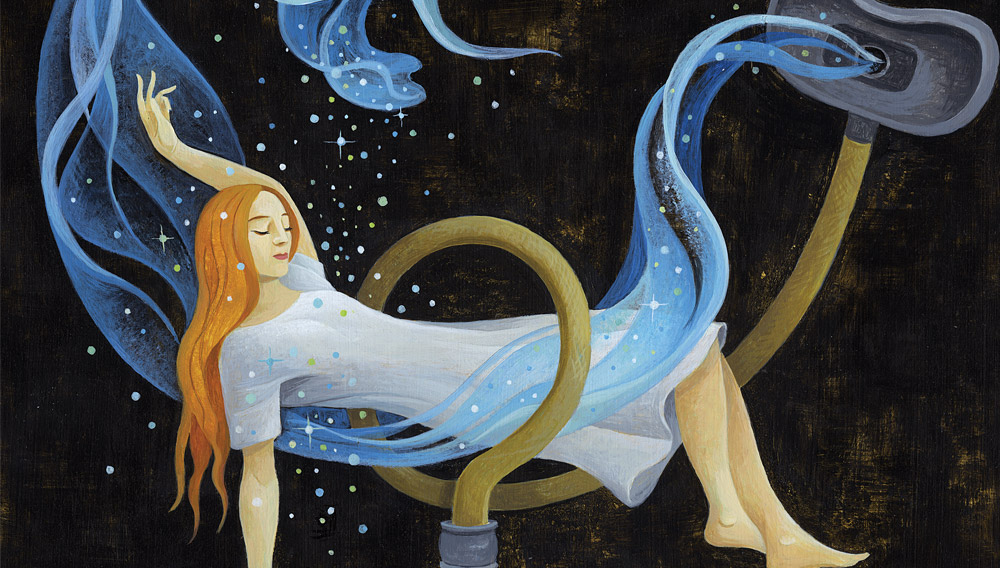 From the screams of the operating theater and the race for patents to the death of a pop star and the current hope for a surprising drug that could mitigate side effects, anesthesia has both a storied past and cutting-edge future.

Those who gathered in the operating theater on October 16, 1846, at Massachusetts General Hospital (MGH) witnessed the closest thing to a miracle that rational men of medicine ever see. The venue was located far from the patient wards, so those in residence could not hear the anguished wailing of the unfortunates who submitted themselves to the surgeon’s knife—but no screams rang out that day. Before John Collins Warren, MD, excised a few tumors from the neck of Edward Gilbert Abbott, a local printer in his 20s, dentist William T.G. Morton stepped forward and did what he had been invited to MGH to do. He offered Abbott a bong-like glass vessel fitted with a mouthpiece and containing a sponge soaked with ether. Abbott breathed deep, Morton retreated, and Warren took over, surrounded by a hopeful crowd of his peers. The procedure was judged a success. When it was over, although Abbott deemed the pain “considerable, though mitigated,” and likened the sensation to having his skin scratched with a hoe, for medicine it was a significant leap forward, away from the typical howls heard throughout the history of surgery.

Ether was the first truly effective anesthetic—a drug that sedates, kills pain, and leaves the patient with no memory of what happened while on the operating table. The world before anesthesia was “brutal and horrible,” says John Neeld, MD, a past president of the American Society of Anesthesiologists and a trustee of its library. “The most admired trait a surgeon could have was speed,” he explains. “You wanted to do the operation in two minutes or less, if you could, because it was so painful.” Dr. Neeld is haunted by British naval hero Admiral Lord Horatio Nelson’s description of having his right arm amputated after being shot during a 1797 attack on Tenerife in the Canary Islands. “What he remembered was the knife was so cold—not that it was painful, but that it was so cold. Nelson wanted a warm knife in the future,” Dr. Neeld says.

Happily a warm knife in the form of ether entered the picture less than 50 years later in that amphitheater at MGH. Henry Jacob Bigelow, a surgeon at MGH, published the story of the October surgery in the November 18 edition of the New England Journal of Medicine that year. In 2012, on the journal’s 200-year anniversary, its readers voted Bigelow’s 1846 account the most important article that it had ever published. Morton’s ether demonstration helped establish Boston as a medical mecca, and the operating theater at MGH where it took place was dubbed The Ether Dome. With its new name, The Ether Dome was transformed from a place of fear and dread to a controlled environment where surgeons could contemplate medical problems that demanded more than two minutes of fierce, frantic effort. “We used to do oper­ations once a month. Now we do 170 a day, maybe 200,” says Warren Zapol, MD, emeritus anesthetist-in-chief at MGH, adding, “Ether changed surgery instantly.”

As with present-day advances, in the later 1840s there was a subsequent rush to patent the use of ether in surgery. Despite his seeming heroic role, Morton was a bit of a rogue, trying to patent “his” find, when in fact, he had been given the idea by a former professor, Charles T. Jackson, MD, after unsuccessfully trying to sedate his dentistry patients with nitrous oxide. In addition to his former professor, among the claimants to come forth was Crawford Long, MD, a Georgia physician, who used ether on March 30, 1842, to remove a neck tumor from patient James M. Venable. Long continued using it for amputations and for women in labor, but did not feel that he had enough data to publish his findings until 1849. The idea dated to his medical school years, which he spent in Kentucky, Pennsylvania, and New York in the 1830s. Instead of marijuana smoking or binge drinking, his classmates engaged in so-called “ether frolics,” where they would inhale ether for fun. Long noticed that partiers who fell and hurt themselves felt no pain and could not remember how they had been injured.

Long’s observation points to a curious truth about anesthetics. Many of the drugs used throughout history for sedating patients and managing their pain—ether, laughing gas, alcohol, opiates—also stimulate the pleasure centers in the brain. Diethyl ether, the anesthetic that Morton used on that historic day, is no longer administered, but its chemical descendants are still part of the medical arsenal. (Anesthetics ending in -ane are often ether-related.) Nor does the anesthetist administer a single drug, as Morton did. A modern patient undergoing general anesthesia may receive as little as one agent or a blend of up to 12 agents that act together to relax muscles, induce paralysis, disrupt formation of memories, sedate, and alleviate pain.

Anesthetist Emery Brown, MD, director of the Neuroscience Statistics Research Lab at MGH, says that the next class of anesthetics will have to work in the brain in different ways than the drugs doctors rely upon now. He estimates that about three to five years’ worth of basic neuroscience research, conducted with anesthesia in mind, needs to be done before we can embark on creating anesthetics that pinpoint just the areas of the brain we need to target, and nothing else. More precisely designed anesthetics could avoid nasty side effects such as nausea and vomiting, and could provide pain relief without the addiction risks that come with opiates and narcotics.

Greater understanding of what is happening in the anesthetized brain has shown how wrong it is to equate anesthesia with going to sleep. Leaving aside the fact that most dozing patients would wake up with alacrity if they felt a scalpel slice into their flesh, electroencephalograph (EEG) readings and magnetic resonance imaging (MRI) observations show that the sleeping brain and the anesthetized brain are different animals. Dr. Brown and others liken anesthesia, a medically controlled and supervised state, to a reversible coma. But given a choice between telling a patient “you will drift off to sleep” or “you will enter a reversible coma,” it is easy to grasp why doctors tend to favor the less medically accurate language.

Michael Jackson’s alleged abuse of the anesthetic propofol, which was among the drugs implicated in his death in 2009, highlights the difference between sleep and anesthesia. Jackson had reportedly received 50 milligrams of propofol routinely in the six weeks before his fatal overdose as a treatment for insomnia—definitely not a recommended use. Unfor­tunately, a drug does not yet exist that stimulates the brain to enter the alternating cycles of rapid eye movement (REM) and non-REM sleep that serve to restore and refresh. Sleeping aids only sedate; the hope is that the sedative will allow the user to relax long enough for the natural sleep cycles to kick in. Unlike over-the-counter and prescription sleep aids, propofol poses grave risks to breathing and blood pressure. Ironically, propofol could not give Jackson the rest his brain truly needed.

Improved brain monitoring should make anesthesia better. Dr. Brown is convinced that teaching anesthesiologists more sophisticated ways to read the EEGs of anesthetized patients should help reduce recall, or what anesthesiologists delicately call “interoperative awareness”—incidences when patients are aware of at least part of what is happening while they lie on the operating table. While most episodes are mild, consisting of little more than remembering things that were said in the operating room, in the most extreme cases patients feel the surgeon’s blade but are helpless to warn the doctors. Dr. Brown says that the drugs used to induce and maintain the altered states needed for surgery make for distinctive, legible wave patterns on an EEG, and anesthetists can be taught to interpret them and act if a patient starts showing signs of awareness.

In addition to improved drugs and brain monitoring, the future promises better post-operative management as well. “Now, when an operation is over, we don’t turn the brain back on, we let the drugs wear off. Why not turn the brain back on?” Dr. Brown says. This year, he will embark on a study that might answer his question. It will give intravenous (IV) Ritalin to humans to see if the Ritalin will bring them out of a state of anesthesia as reliably as it does in rats. If the trial succeeds, someday IV Ritalin could be employed to combat the cognitive decline seen in some post-operative patients. And it is very probable that the discoveries Dr. Brown and his colleagues will make along the way may answer thorny questions from other brain-science fields—work on anesthetics could well lead to cures for depression, insomnia, and other maladies that afflict the brain.

“I was trained to think pharmacologically,” says Dr. Brown, explaining that he taught himself a great deal of neuroscience on his own. “Now I think, oh my God, this is even cooler than I ever realized 20 years ago.”

Putting Pain in its Place

God dooms Eve to painful childbirth, saying, “in sorrow thou shalt bring forth children.” This admonition prompts generations of Christian clergymen to encourage midwives to withhold pain relief from laboring mothers. (But see 1853 for the happy ending.)

Noted doctor and anatomist Fallopius laments the lousy state of anesthesia in his day: “When soporifics are weak, they are useless, and when strong, they kill.”

Dr. Crawford Long relies on ether to sedate a patient during a neck operation, but does not publish the fact until 1849.

During the birth of her eighth child, Prince Leopold, Queen Victoria accepts chloroform from her obstetrician, Dr. John Snow, applying a royal seal of approval to pain relief in labor.

Austrian ophthalmologist Karl Koller is the first to use cocaine as a local anesthetic, applying it during an eye surgery. Koller’s friend Sigmund Freud gave him the idea.

Sodium pentothal becomes the first anesthetic administered intravenously, rather than as an inhalable gas.

The American Board of Medical Specialties formally recognizes anesthesia as a distinct medical discipline.