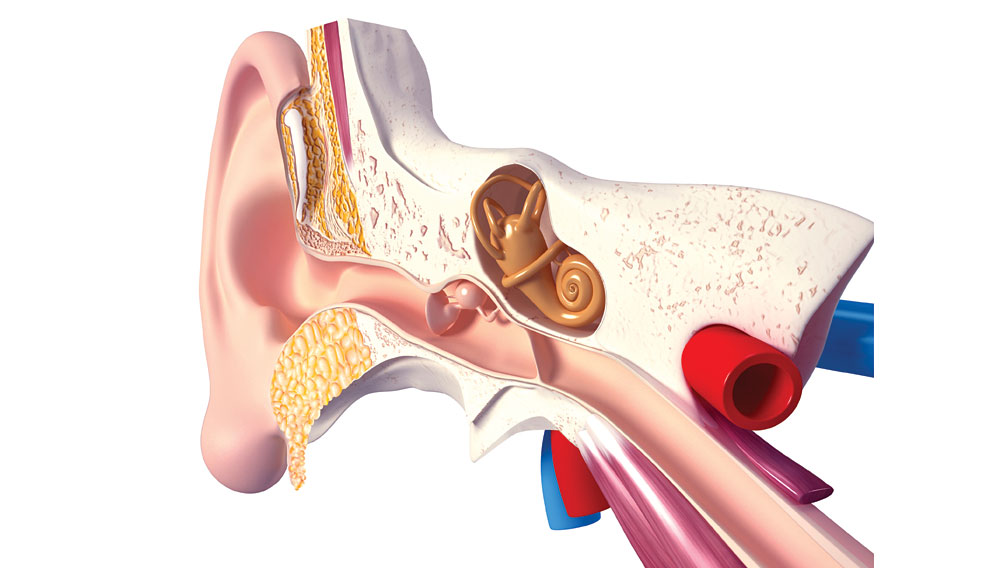 Imagine if every noise your body made echoed loudly in your brain. For nine months, Karrie Aitken, 46, couldn’t tolerate any sound, including her own voice. Each word vibrated in her head like she was trapped inside a barrel. Munching on chips was deafening. But hearing her heartbeat was the worst.

“My heart pounded like a drum in my ear 24/7,” described the Chatsworth mother of three. “It drowned out music, television and roomful of people talking. I had to take anxiety pills to fall asleep; the noise never went away.” Aitken’s bizarre auditory symptoms were accompanied by hearing loss, ear pain, poor balance, vertigo and nausea. Multiple trips to the ER and various physicians proved fruitless. Doctors advised her to get a hearing aid and see a psychiatrist and blamed her symptoms on sinusitis and anxiety attacks.

Depression consumed Aitken’s life; she lost 40 pounds and cried constantly. Finally, she was examined at Ronald Reagan UCLA Medical Center by head and neck surgeon Quinton Gopen, MD (RES ’04). He told her, “I know what you have.” Aitken suffered from a rare disease called semicircular canal dehiscence syndrome (SCDS), caused by a tiny hole in one of the three canals inside her left ear. A CT scan revealed that the bone separating the superior canal from the brain had thinned, opening a small pore between the two areas that broadcast sounds from Aitken’s body directly into her inner ear.

Dr. Gopen partnered with UCLA neurosurgeon Isaac Yang, MD ’04, to open Aitken’s skull, push the brain out of the way and plug the miniscule hole in her ear canal. When Aitken awoke, the loud echoes of her heartbeat and voice had vanished. Her hearing is good as new, and she has regained her appetite and enthusiasm for life.

According to Dr. Gopen, Aitken’s frustrating journey toward diagnosis isn’t unusual. SCDS wasn’t identified until 1998 – a recent enough discovery that it’s just beginning to be added to textbooks and taught in medical school. As a result, Dr. Gopen says, most physicians are not familiar with the rare syndrome, which affects an estimated 1 percent of the population.

Drs. Yang and Gopen recently published the first overview on SCDS in the Journal of Neurological Surgery. Their goal is to educate their colleagues, so other patients don’t have to suffer from Aitken’s ordeal, and to share the best way to uncover the ear-canal hole – typically the width of three human hairs.