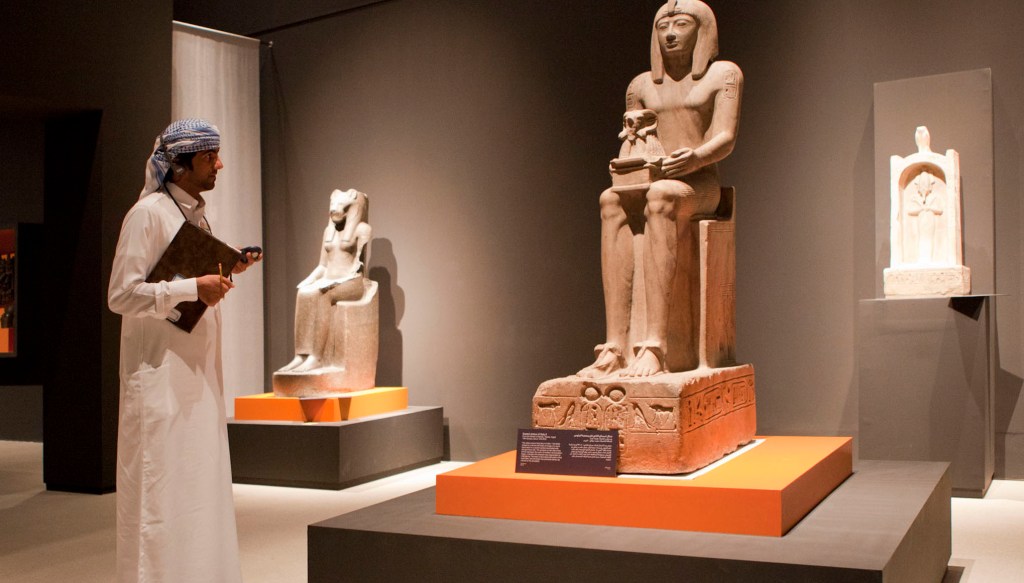 Offering a flavor of the eagerly anticipated Zayed National Museum, the Abu Dhabi Tourism & Culture Authority (TCA Abu Dhabi) has collaborated with the British Museum to present A History of the World in 100 Objects; an inspiring exhibition that captures both the history of the world and the significant role the Middle East has played within it through a vivid display of compelling objects. Third in a series of major exhibitions leading to the opening of Zayed National Museum in 2016, this exhibition will be held at Manarat Al Saadiyat in Abu Dhabi’s Saadiyat Cultural District from April 23 until August 2, 2014, for a period of 100 days.

Inspired by a popular BBC radio series, A History of the World in 100 Objects features personal objects such as the Chinese Jade Hair Ornament (dated c.3,500 BCE), while also showcasing other objects that were made for whole communities to use including the Bird-shaped Pestle from Papua New Guinea (dated 6000–2000 BCE). Objects such as the Hebrew Astrolabe from Spain (dated 1345–1355 CE) was designed to advance human understanding of the world around us, while others represent the surviving relics of lost civilizations such as the Mexican Huastec Sculpture (900–1521 CE).Allowing visitors to travel back in time and across the globe, people can explore how humans have shaped the world, and been shaped by it.

HE Sheikh Sultan bin Tahnoon Al Nahyan, Chairman, TCA Abu Dhabi, said: “It is with great anticipation that we welcome some of the world’s most precious objects to Abu Dhabi for the A History of the World in 100 Objects exhibition, which come together to illustrate a history of humanity. This exhibition, the latest in a series of major public exhibitions leading to the opening of Zayed National Museum, is another important milestone in Abu Dhabi’s developing cultural scene, as it builds momentum and inspires interest in the country’s first national federal museum, whilst placing the history of the UAE and its cultural significance within the context of the world.”

Neil MacGregor, Director of the British Museum, said: “I am delighted that the first exhibition project based on the ‘A History of the World’ series will be taking place in Abu Dhabi. Objects have a tremendous power and ability to tell stories, in many instances they are the only evidence we have for certain cultures so these kinds of temporary exhibitions, and indeed the permanent displays in Zayed National Museum, are hugely important to aid our understanding of the world.”

In line with some of the themes that will define Zayed National Museum, such as, faith and Islam, people and heritage, and science and learning, this exhibition will help visitors discover our common humanity and to understand the development of human cultures across the globe.

The exhibition also explores several important objects from the Middle East and the UAE. An intriguing burnt bowl introduces early cattle farming in Northern Iraq in 5600–5200 BCE, while the famous Royal Game of Ur invites visitors into the cosmopolitan world of the Sumerians, around 2,500 BCE. As the exhibition progresses, visitors will come across beautiful gold coins demonstrating the spread of Islam in the 7th Century. The last section of the exhibition features a remarkable foot-controlled car, invented by Emirati student Ms. Reem Al Marzouqi from the United Arab Emirates University (UAEU) in 2013, which has the capacity to change the lives of disabled drivers.

Running alongside the exhibition will be a full public program of workshops, tours and seminars including an opening lecture titled ‘Unlocking Objects’ with Neil MacGregor, Director of the British Museum on April 22 at 6.30 p.m.