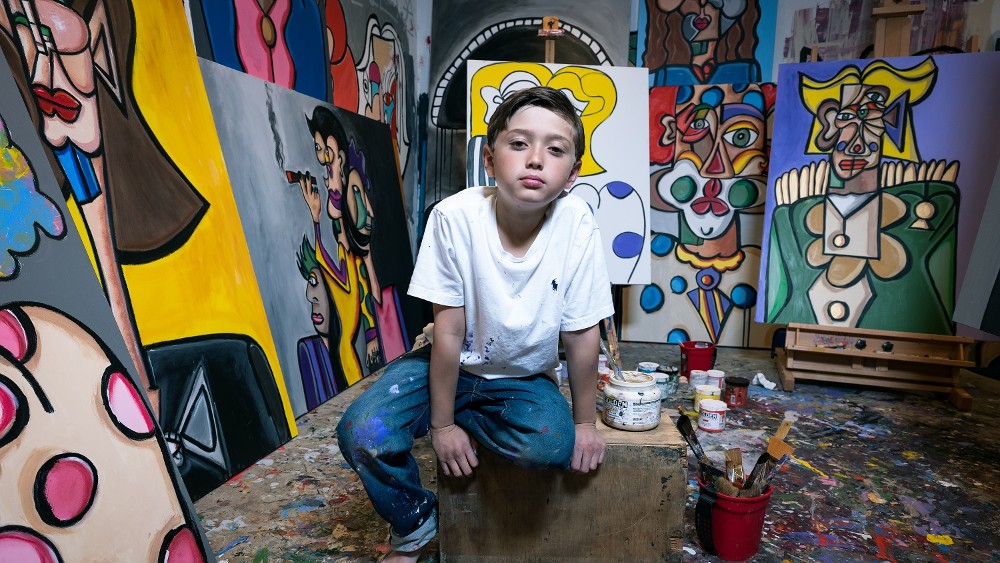 When Andres Valencia was five years old, his parents, Elsa and Lupe Valencia, knew their son had a special gift. They were right. Just five years later at 10 years old, Valencia has accomplished more than many artists do in their lifetime. The contemporary artist had a solo showcase at Art Miami, made his solo gallery debut (“No Rules”)  in New York at Chase Contemporary, and has sold several pieces upwards of $125,000. High-profile collectors and fans include Brooke Shields, Diane Keaton, Jon Bon Jovi, Channing Tatum and Sofia Vergara, to name a very few.

But it’s not just the successful showcases or impressive collaborations (which include projects with Risk Rock, Raphael Mazzucco, Bradley Theodore and RETNA). Valencia has always sought out ways to give back through his art. To date, he’s raised over $300,000 for various charities and organizations.

He was sick one day and stayed home from school, shortly after the war broke out, which is when he heard on the news about the invasion of Ukraine. Devastated by what he heard, Valencia took to the canvas. Thus, his piece, Invasion of Ukraine, was born. Valencia enjoys helping people with his art and wanted the piece to benefit the people of Ukraine. He has partnered with The Klitschko Foundation, founded by Ukrainian heavyweight boxing champions and brothers, Wladimir and Vitali Klitschko, an on-the-ground foundation that provides humanitarian aid and is helping the Ukrainian people amid the horrific invasion by Russia. There will be 550 prints of the piece, priced at $950, with 100% of the proceeds benefiting the foundation. The original work, which measures 48×60 inches, will live at Chase Contemporary.

“I learned about it watching the news and hearing all the things people are going through and what’s happening in Ukraine,” Valencia says via Zoom, joined by his father, Lupe. “I hope that Ukraine can win the war and be left in peace.”

Andres in his studio.  Andres Valencia

Symbolism, Surrealism and Cubism styles combine in the painting, which depicts the horror of war. There is an eye weeping onto a Ukrainian flag with a broken heart and bullet casings, an assault rifle and Russian soldiers. In the center of the painting there are people on the ground trying to fight and the hand of the Ukrainian soldier depicts power, Valencia explains.

“I want people to know that Ukraine won’t give up and they’ll keep fighting,” Valencia says. “I want it to be known as the Guernica of today. [Picasso] made the painting for Guernica and didn’t want the people of Guernica to be forgotten.”

Lupe says they hope to raise at least half a million dollars for Ukraine with the 500 prints that will be sold. He also says that his son continues to ask about ways he can raise money through his art.

“Our whole family is inspired by that, including Andres, so we will hopefully continue to raise money for different charities that Andres is interested in,” he says.

When he’s not painting his large-format works, he is likely studying the works of Pablo Picasso, Modigliani Modigliani, Diego Rivera and George Brock. Though neither of Valencia’s parents paint, his father collects art. He paints and sketches both smaller format and large-format works, which he does in a dedicated painting room in his home, which are accomplished by standing on a ladder to reach every inch. He enjoys painting at night and listening to music to inspire his process, but he paints whenever he is inspired.

“When he was four or five, my wife and I would watch him paint and do sketches, and we were really surprised at what he would do,” Lupe says. “On one hand, you think you like it because you’re supposed to like what your children do. But as time went on, things got more sophisticated and evolved. When Bernie Chase, who now represents Andres, came over when he was six or seven, he decided to represent him. He told us that Andres is going to be an important artist.”

Invasion of Ukraine prints will be available September 9.