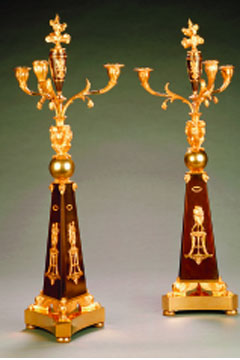 Sitting on a green Georgian sofa that was on display in his firm’s booth at the TEFAF Maastricht fair earlier this year, Lanto Synge, managing director of Mallett, explained what makes the carved giltwood furnishing an item worthy of his firm: “It’s incredibly elegant, a rarity unto itself, exceptional by any standard.” The sofa, which might have been made by Robert Adam, is also a classically English piece of furniture, and therefore an appropriate representative from the firm’s flagship New Bond Street location. (Mallett’s second gallery is at Bourdon House in London.) However, English furniture is not the firm’s only focus; it also deals in European furniture as well as textiles, glass, decorative objects, lighting fixtures, and even paintings. More to the point, it excels in all of these different categories.

The full range of Mallett’s wares was on display at its booth in Maastricht. Passersby were lured into the booth by a set of 16 Cuban mahogany Chippendale dining chairs arranged around a late-18th-century English dining table, also made of mahogany. Decorating the tabletop were a pair of Empire bronze and gilt four-branch candelabra. If none of these items strikes your fancy, chances are something else in Mallett’s $39 million inventory will.

Synge says that the key to the firm’s success lies in its highly trained staff, who strive to select items that are “not just excellent, but exceptional.” He joined Mallett as a 22-year-old novice in the late 1960s and worked his way up to his present position by spending countless hours studying beautiful objects. “My business is all about the ability to select the best in the world, and it takes years of training and practice,” he says.

In April, Synge led Mallett through one of the boldest moves in its 138-year history when its first permanent U.S. gallery opened on Madison Avenue in New York. “I had always wanted to open in New York, and I thought that the next little lull in business would be the moment to step forward,” he says. (Synge speaks of business in general, not that of his firm; Mallett, which is listed on the London Stock Exchange, posted a 20 percent rise in profits for 2002.)

While the New Bond Street and Bourdon House galleries have their own distinct atmospheres, the 3,000-square-foot New York gallery is designed to reflect both of its London antecedents. “In some ways, it will be better than the two shops, because it will represent both in the same building,” Synge says.

The combination should prove alluring to established American clients and new customers alike. “Every piece is individual,” Synge says. “That’s what’s so fascinating about antiques.”