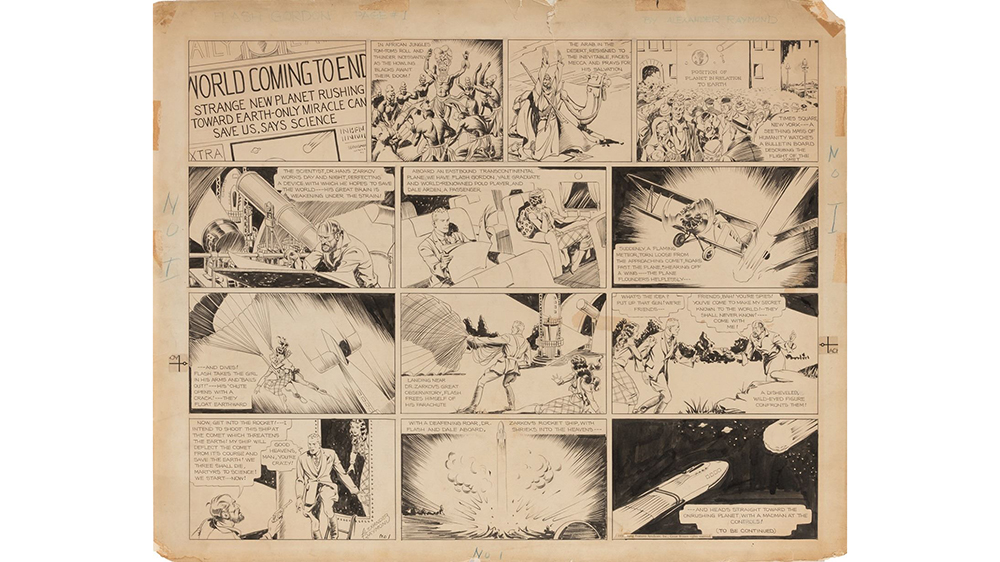 Flash Gordon is arguably one of the greatest adventure comics ever penned. Now, devout stans have a chance to get their hands on the first and original strip of the beloved series for a cool half a mil.

Profiles in History announced on Wednesday that it will auction the pencil-and-ink drawing on March 31 and issued an estimate of between $400,000 and $600,000.

The artwork was first published in January 1934 after artist Alex Raymond was commissioned to create a comic to compete against the Buck Rogers strip that was all the rage at the time. The result was the sci-fi epic Flash Gordon which went on to influence pop culture and inspire beloved stories, like Star Wars and Star Trek.

According to the auction house, this is the first time the piece has been put up for sale and its backstory is nothing short of serendipitous: A client whose late husband was a life-long comic collector was in the process of appraising his collection. She sent Profiles in History a picture of the work, which was framed on her wall, and the rest is history.

“When she sent detailed images of the piece, we couldn’t believe our eyes,” the auction house said. “It was the original artwork for the very first issue of Flash Gordon, replete with ‘No 1’ handwritten beside comic legend Alex Raymond’s signature.”

The coveted illustration features 13 panels and sees Yale graduate and polo player Flash aboard a transcontinental plane—given the size of the seat, we’d guess business class—which is struck by a comet. Flash parachutes to a nearby planet with another survivor, and they’re both forced aboard a rocket by a mad scientist on a suicide mission to stop a comet on a collision course with Earth.

If the space opera’s intergalactic narrative isn’t enough to hook you, the artistry surely will. Raymond, who died in 1956, was praised for his flair and finesse, both of which are present in this 87-year-old strip. Fans of the comic creator will also have a chance to purchase three other works during the auction, including a strip of Jungle Jim (above) which was Raymond’s answer to Tarzan.

The Alex Raymond Flash Gordon Auction will take place on March 31 at 11 am. Interested parties can bid online here.