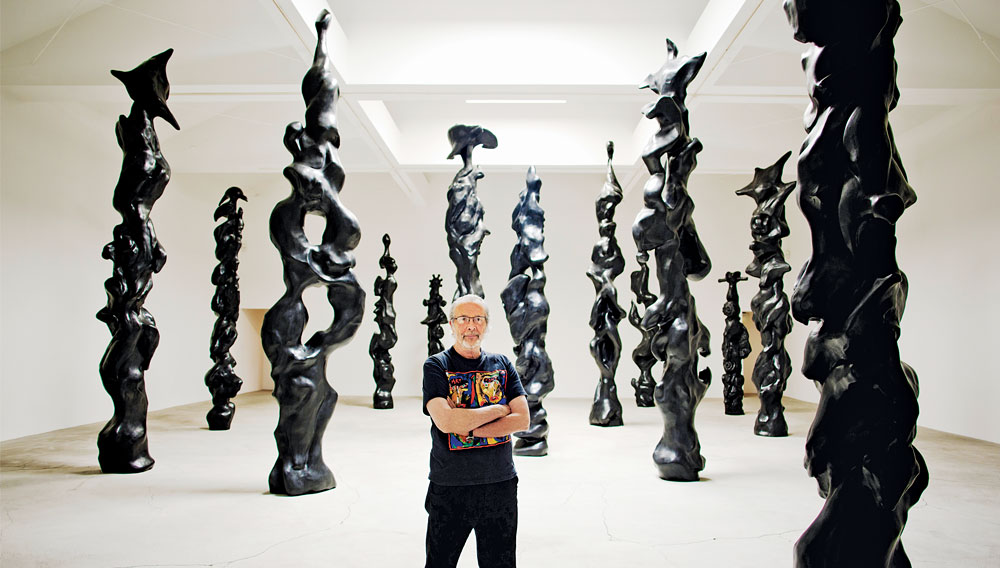 Although best known as the Grammy Award–winning lead man of the Tijuana Brass, 77-year-old trumpeter Herb Alpert has a professional playlist that also includes songwriter (he cowrote “Wonderful World” with Sam Cooke and Lou Adler), record-label founder (he is the A in A&M Records), painter and sculptor (his latest works include 18-foot-tall bronze totems), Broadway-theater executive (he coproduced Angels in America), and, with his wife, singer Lani Hall, philanthropist. Since creating the Herb Alpert Foundation in the 1980s with the California Institute of the Arts, the Malibu-based couple has contributed more than $120 million to artistic endeavors. Robb Report caught up with the patron at his foundation’s 18th-annual Alpert Award in the Arts ceremony in Santa Monica, Calif., where he honored five mid-career visual and performing artists with $75,000 grants. “Artists need to be encouraged and supported,” Alpert says. “I get great pleasure out of doing that.” —Lisa Sweetingham

When did you first pick up a trumpet?

I started playing when I was eight. As a teenager in the ’50s, I was part of a trumpet-drums-piano trio that entered a TV show in L.A. called High Talent Battle. We won for about seven weeks in a row. I was feeling pretty good about myself. Then I got drafted, and the Army sent me to band school, where I met a lot of trumpet players who were better than me. I realized that if I was going to be a professional trumpet player, I’d have to come up with my own style.

Do you have a favorite trumpet?

The one I use in all the Tijuana Brass records. It was made in Chicago by a man named Elden Benge. I bought it in 1950 for about $300 from a music store on Santa Monica Boule­vard. It liked me, we liked each other, and we’ve made some pretty good music together. Every now and then I pull it out and play it, make sure it’s oiled. It’s been a good friend; I want to make sure it’s happy. It’s eventually going to the Smithsonian.

Where do you do your best work?

Our home in Malibu. I have a music studio, paint studio, and sculpture studio. I usually paint early in the morning. Some days I don’t feel creative, and I don’t force it. I just let it be. But I do practice the trumpet every day of my life.

What inspires you as a painter?

The last series of paintings I did were for my daughter, who’s very particular about what she eats and buys. So I started painting with organic concentrated coffee. It seeps into the canvas. I’ll boil it and use some of the grinds as well. I do it for my own pleasure. I’m always amazed that other people are interested in my work.

And your inspirations as a sculptor?

I do 18-foot totems in bronze, and I got my inspiration for them in Vancouver, British Columbia, at Stanley Park, where they have these exhibits of the totem poles of the Northwest Indians. Henry Moore is also an inspiration. His pieces feel very tactile, like you can touch them, run up and hug them, as opposed to the harder, stab-you-in-the-back-type pieces.

Why did you start your foundation?

I think the creative experience is important, and I’m very passionate about arts education. There was a book written by a friend of mine, Sir Ken Robinson, and in one of the chapters, he writes about an experience with this little 6-year-old girl. In class, she’s not very attentive; but when they get to the arts program, she’s there. The assignment was to draw whatever they like. So she’s drawing away, the teacher comes over and says, “That’s beautiful, what are you drawing?” “A picture of God.” “Oh, that’s very nice. But we don’t really know what God looks like.” The little girl says, “You will in a minute.” That’s what art is about—a little kid running with her imagination. We tend to beat that out of kids as they start growing up.