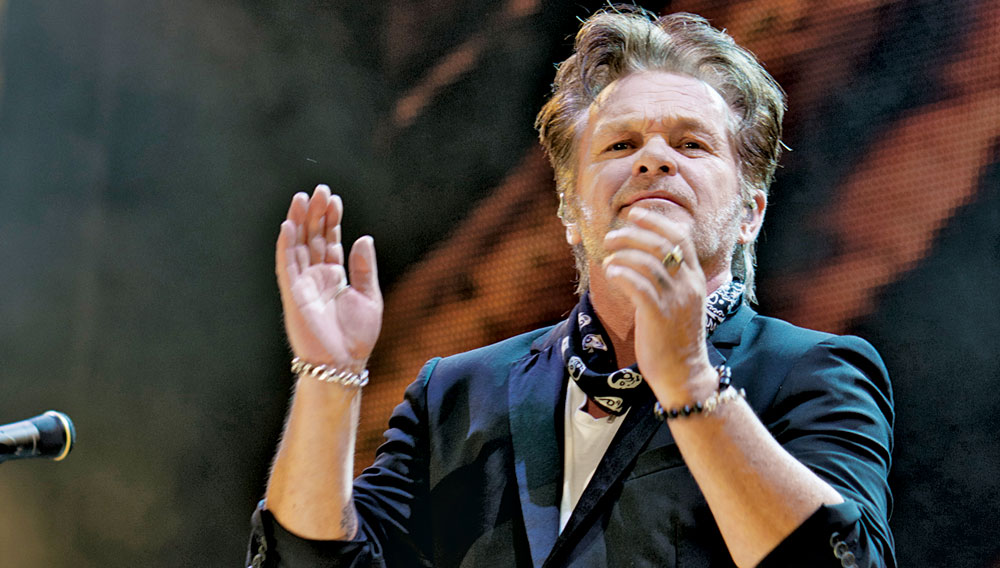 John Mellencamp made his name in music with gritty rock songs—“Jack & Diane,” “Pink Houses,” “Small Town”—that charted the joys and struggles of ordinary Americans. Born in Seymour, Ind., a descendant of German farmers, Mellencamp has remained true to his heartland roots throughout his 26-album career. In 1985, he and fellow musicians Neil Young and Willie Nelson founded the nonprofit Farm Aid, which, driven by its annual benefit concerts, has raised more than $40 million for family farms over the years. The 61-year-old Mellencamp continues to write and perform, and he recently collaborated with author Stephen King on a musical, Ghost Brothers of Darkland County, which opened in Atlanta in April. That same month, the Tennessee State Museum in Nashville debuted Nothing Like I Planned, the first museum retrospective of the rock star’s oil paintings. The multitalented Mellencamp, however, takes his widespread success in stride, always returning from his tours, exhibits, and other extravaganzas to his home near the same small town in Indiana where he grew up. —Cynthia Elyce Rubin

You are an artist, but do you collect art?

I have a very diverse collection. I’ve always been interested in portraiture, so I looked at Rembrandt. That led me to Impressionism, which I didn’t have much of a feeling for. Then I went to German painting, which has stayed with me and remains the basic foundation for what I do. Early on I bought a Max Beckmann. Matter of fact, I’ve had it so long, I can’t remember its name, but it’s a portrait of two women. I have a Chaim Soutine entitled Man with Straw Hat. There are Jack Levines. I also have works by Sam Doyle, an African-American born on St. Helena Island near Beaufort, South Carolina, whose paintings on corrugated tin reflect the culture and traditions of Southern island life. His paintings are simple, colorful, and strong. And I love faces, so I have hundreds of faces looking at me. I counted about 782 one day—paintings, sculptures, and dolls.

I’m very into interior design. When I travel, I buy what I like. My home is filled with paintings and objects from any and all periods. Modern to antique and zany folk art—it’s all there. I look at what I call the “math,” or rhythm, of the room. The furniture: Is it in alignment or off-center? You design the room for what you think looks good, but you’re really doing a math problem. I look at everything that way. In a song, there are so many beats per measure, so many measures in a verse.

Tell us about your motorcycles.

I have about 25 motorcycles. Some are pieces of art. The one I enjoy the most is a custom, handmade Exile Cycle made by Russell Mitchell in Los Angeles. He’s from England, wears a spiky Mohawk, and makes the coolest bikes on the planet—low-slung, not mean but no-nonsense, clean and tough European styling. It has the speed, design, handling, and just all of it. I enjoy driving it on Indiana’s back roads.

Where do you go on vacation?

I don’t take vacations. I’m working all the time, whether it’s thinking up some song lyrics or painting. I travel so much that I’m just happy to be home, whether it’s in Indiana—at my main home outside Bloomington, near Seymour, where I grew up and my father still lives—or at my home on Daufuskie Island, a sea island between Savannah, Georgia, and Hilton Head, South Carolina. It’s a very special place, home to native islanders with their own culture and language called Gullah, descendants of black slaves from West Africa. Only 250 people live on the island, so it’s very quiet there. I have a small studio, but I don’t paint much. I like to hang out.