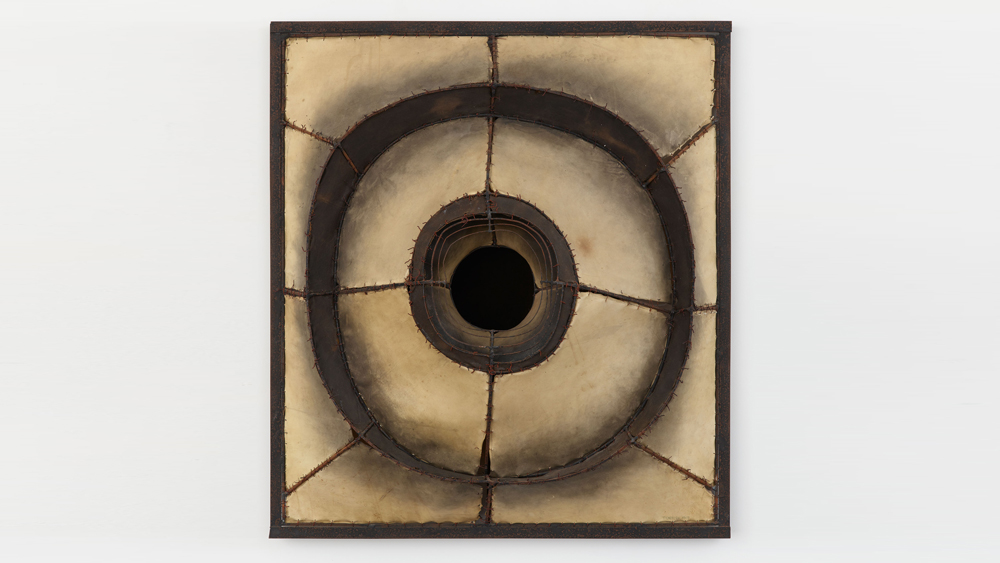 It is rare that one encounters so many masterworks by titans of 20th-century art outside of a museum—but that is just what one will find in Intimate Infinite: Imagine a Journey, an exhibition unveiled this week at the Lévy Gorvy gallery on Manhattan’s Upper East Side. Curated by gallery cofounder Brett Gorvy, the show of nearly 100 works by 27 artists unfolds over three floors of the landmarked neofederalist-style building, each “level” representing a chapter in a visual narrative inspired by William Blake’s poem “Auguries of Innocence”:

To see a World in a Grain of Sand
And a Heaven in a Wild Flower,
Hold Infinity in the palm of your hand
And Eternity in an hour.

“Being able to assemble this exhibition has really been a dream come true,” says Gorvy, clearly delighted at the visual marriages he has presented on the gallery walls. The ground floor offers a dialogue between subtly hued canvases by Robert Ryman and Cy Twombly—a counterpoint of sorts between the former’s heavily impastoed exercises in respecting the restraint of a square and the latter’s mixed-media pieces, including an exquisite gem of a work, Untitled (1961).

On the second floor, viewers encounter a suite of tactile pieces that easily blur the boundary between painting and sculpture. Of particular note is a trio of untitled organic forms wrought in canvas, welded steel, and wire by American artist Lee Bontecou that were made between 1959 and 1964, as well as a trio of sculptural assemblages by Hannah Wilke from 1974, each titled Needed-Erase-Her. As their names suggest, each was executed in kneaded eraser and placed on a wooden plinth. These works are complemented by Günther Uecker’s massive nail-base diptych Wind (2009) and White Target, an encaustic on newsprint on canvas by Jasper Johns from 1958.

The intimate third-floor display is a virtual cabinet of curiosities. Its feast of obsessive-compulsive pieces includes boxes by Joseph Cornell, seven mixed-media collages by Jean Dubuffet made up largely of moths and butterflies, and Bricolage (1967), an eye-catching work by Carol Rama. Each of the works presented here demands intense scrutiny, for the longer one gazes at each piece, the more one sees.

“In this age of social media, when we are bombarded daily with fleeting images,” says Gorvy, “our aim with this show is to give visitors a chance to slow down and take in each work as an act of contemplation—and, as Blake suggests, to look intensely at each grain of sand and find within it a whole universe.” The exhibition runs through October 24.