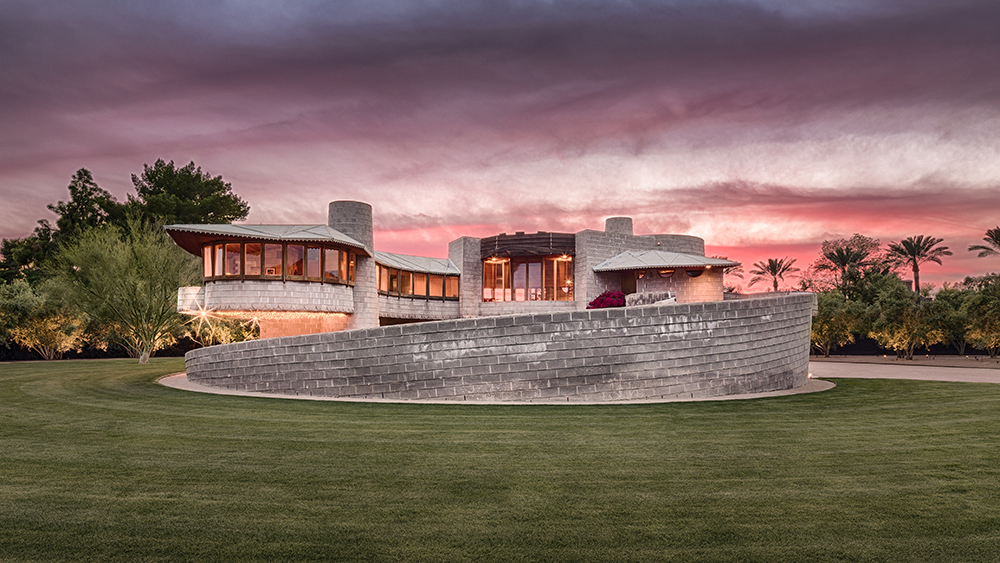 Earlier this month, eight of Frank Lloyd Wright’s iconic structures were inscribed on UNESCO’s famed World Heritage List. Undoubtedly, the fanfare and adoration of the prolific American architect have increased—but one photographer’s infatuation existed well before Wright received this latest honor. Since 2011, Andrew Pielage has been on a mission to shoot every single one of the starchitect’s seminal structures in their most appealing light.

The ambitious project began somewhat by chance when NPR host Lauren Gilger asked the Phoenix-based photographer how many of Wright’s sites he would like to capture during an interview. Pielage gave a seemingly nonchalant response—“Well, I guess all of them”—and subsequently kicked off the epic quest.

So far, the spirited 40-year-old has shot 65 of the architectural titan’s sites—with more than 350 still due to appear in front of the lens. We caught up with Pielage following a recent trip to Peru to see how he was faring.

What inspired you to start this project?

Being born to a geologist father and adventurous mother, much of my childhood was spent in the backcountry of the desert Southwest. I started carrying a Walgreens disposable camera on these trips when I was in junior high, taking photos of weird clouds or oddly colored rocks. This really grounded me first and foremost in traditional landscape photography. My first visit to a Frank Lloyd Wright site was to Taliesin West in 2011, that’s when I first experienced what it meant to see and feel Wright’s architecture. I immediately connected to his use of blending his buildings with the environment that surrounds them. Wright says, “Hill and house should live together, each the happier for the other,” and that is apparent at the first sight of this architecture. I think being raised in the outdoors really created a special bond and connection with the desert landscape and seeing Wright architecture at Taliesin West doing the same thing is what really got me hooked on his designs and organic philosophy.

How far along are you?

My journey started in 2011 photographing Taliesin West in my home state of Arizona. I have now photographed 65 Wright sites out of 431 in 10 different states. So I’m pretty close to being done now… This project has also lead to sharing my experiences through lectures and teaching photography workshops at three different Frank Lloyd Wright sites around the country. They are Fallingwater in Pennsylvania, Taliesin in Wisconsin and Taliesin West in Arizona. With two more sites being added in 2020.

What are the major issues you have encountered?

There have been no real issues, except a lot of times I want to spend all day and all night photographing these sites and the owners have to kick me out.

What has been your favorite Wright building to shoot?

That is a really tough question because they are all unique in both design and environment. I tend to put all my effort and thoughts into each site I photograph so it’s hard not to fall in love with each of them.

You made a decision to shoot the structures in natural light, why? How difficult has this been?

Wright is quoted as saying, “More and more, so it seems to me, light is the beautifier of the building.” His designs are always so integrated into catching, bouncing and releasing natural light that I thought I would only be cheating Wright’s true ideas if I introduced light, in any form, into his space. Wright would probably roll over in his grave if I cast an artificial shadow in his designs without asking permission. Working with natural light is time-sensitive and that magical ‘golden hour’ is never really an hour. Sometimes it’s only a few minutes. That means a lot of early mornings and late nights waiting for the light that Wright designed the space to capture. The Wright community has been so supportive in allowing me to be in these spaces at all hours of the day and night. I could not have got this far without their gracious hospitality.

Eight of Wright’s building were recently added to the World Heritage List. What does this mean for your project?

Great question. What was maybe a big surprise to the rest of the world was something the Wright community has known for a long time. Wright’s designs are timeless and influenced not only what a modern house design was to be but also museums, and on on a smaller scale aisle lighting and furniture design, for example. Wright’s organic philosophy was way before his time and those principles he was exploring then are now being recognized on a worldwide scale. That’s awesome. I’m just excited to be part of a much bigger team that is promoting and protecting Wright sites around the world.

Do you have a go-to camera or does it depend on the situation?

I always use Canon cameras with both a 17mm and 24mm tilt-shift lens in my architectural photography. On a basic level, the tilt-shift lens is used for perspective control. No architect, dead or alive, wants to see their walls or vertical lines converging or caving in; they want them to be straight up and down. When you tilt a wide-angle lens up or down, it causes vertical lines to distort. The way to fix this is with a tilt-shift lens as you photograph. Canon has been very gracious in supporting my Wright project.