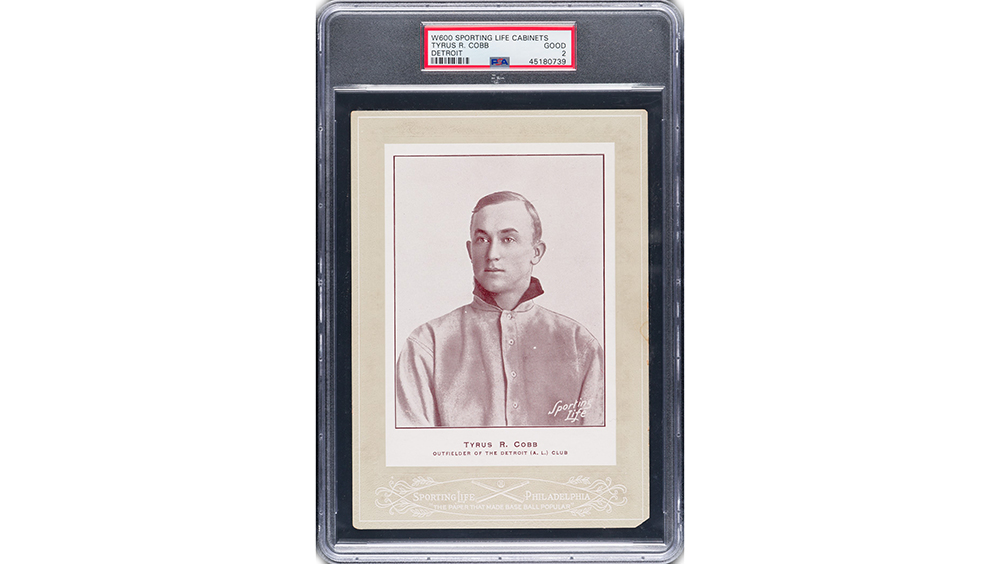 No card appeals more to a sports card collector than one from a future Hall of Famer’s rookie season. And now one of the rarest of all time, and the first to depict Ty Cobb, is going up for auction.

Late last week, a 1907 W600 Sporting Life cabinet card of the Detroit Tiger legend was posted for bidding in an online-only sale held by Robert Edward Auctions. Running through Sunday, April 19, the auction will give baseball card collectors a chance to snag the single most important card from one of the landmark sets of all time.

The W600 Sporting Life cabinet cards were released between 1902 and 1911. This particular oversized card was issued in 1907, Cobb’s official rookie season, and is the only from the set to feature the legendary centerfielder.  Though the producers of the W600 Sporting Life cabinets couldn’t have known it at the time, Cobb would go on become one of the greatest baseball players of all time, hitting .367 during a storied career that would last until 1928.

While the W600 Sporting Life card isn’t the most valuable Cobb card out there—that would be the 1909 TP206 “Bat Off Shoulder” card that sold for $488,425 in 2018—it is one of the rarest. Robert Edward Auctions has only offered one other example for sale over the last 20 years, and only two others are known to have gone up for public auction during that time.

“This is one of Ty Cobb’s rare and most striking cards. Collectors have a unique opportunity to own one of the rarest cards; this may be one of only six in existence based upon the reports of the professional graders,” said the auction house’s president, Brian Dwyer.

The Cobb rookie card has been certified as being in “GOOD 2” condition by the Professional Sports Authenticator due to a small ding in the lower left-hand corner. Still that’s remarkable shape for a card that’s 113 years old. Though REA hasn’t listed an estimate for the card, a press release announcing the sale predicted it could sell for in excess of $300,000. As of Tuesday morning, bidding had already reached $200,000.