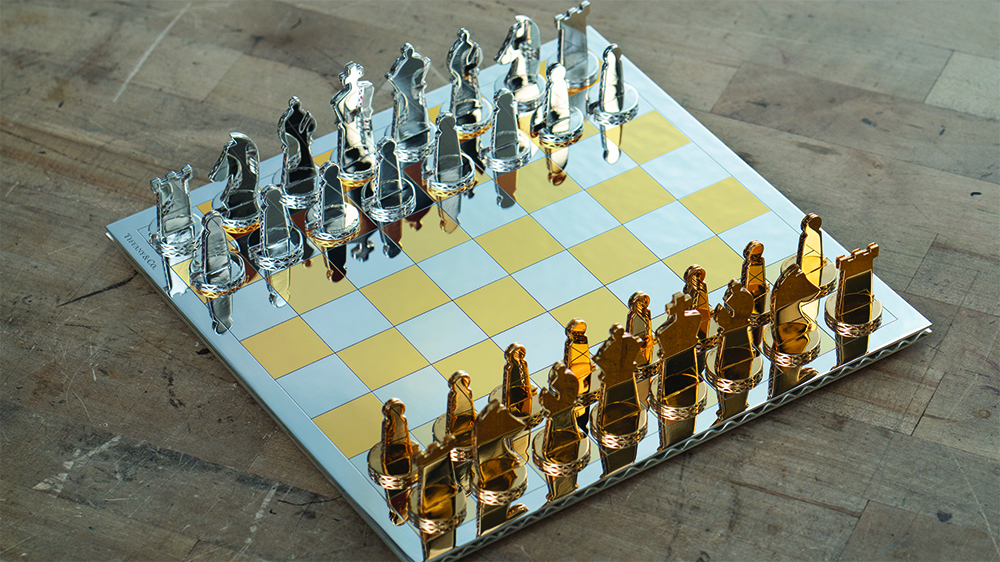 When Tiffany & Co. set out to make a chess set, it did so via an unlikely muse—cardboard. “We were playing around with [it], the way it’s corrugated,” says chief artistic officer Reed Krakoff. Toying with more revered materials, he juxtaposed sterling silver and gold vermeil using cardboard’s simple form. It’s unexpected; it’s utilitarian. It’s also quintessentially Tiffany. “Tiffany has a long history of playing with organic and minimal shapes,” he continues. “It definitely fits.” Lighthearted as it may be, the set still bears the fingerprints (metaphorical ones, of course—each piece is polished to the highest shine) of Tiffany’s true-blue craftsmanship.

The chess set’s contours and textures proved a design challenge. Tiffany’s workshop in Cumberland, R.I., used all of its craftspeople’s skills to create a product worthy of Krakoff ’s vision—and its estimated $75,000 price tag—even going so far as to experiment with and eventually adopt new techniques to properly render each chess piece. The result is more fun than flash and in the same spirit as Tiffany’s recent amazonite- and-sterling tic-tac-toe set, or its coffee mugs, which render a humble paper-cup silhouette in fine bone china. “It’s a playful take,” Krakoff says. After all, “it wouldn’t be interesting to just make a classic chess set.” 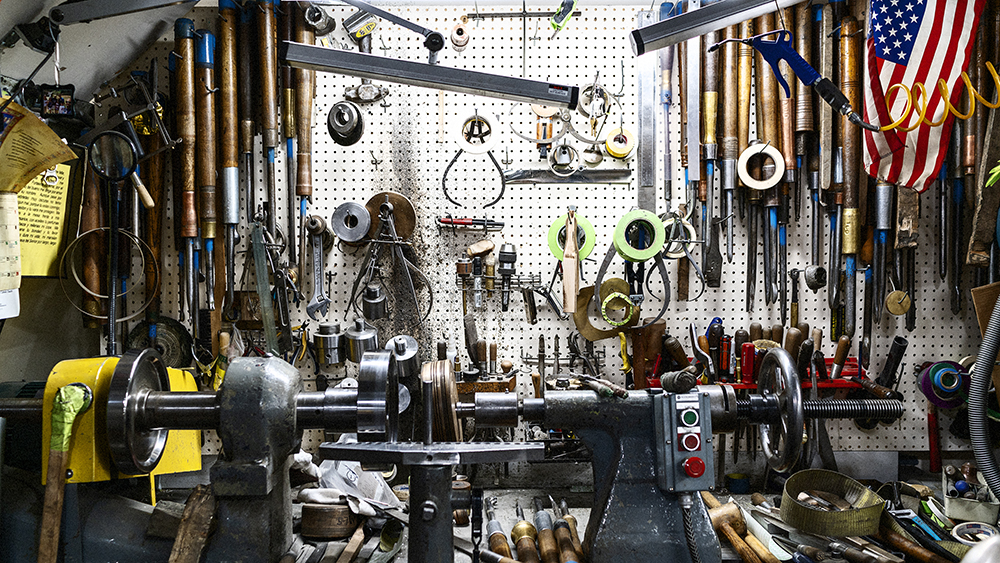 Tiffany’s silversmiths clock in to the Rhode Island hollowware workshop and don their safety glasses—or gloves if they’ll be up to any polishing. The collective hum of machinery, some of it more than a century old, fills the air. A day on the job here
can consist of perfecting the polish on a decorative plate or fine-tuning the NFL’s Vince Lombardi Trophy. But today, they’re playing chess. 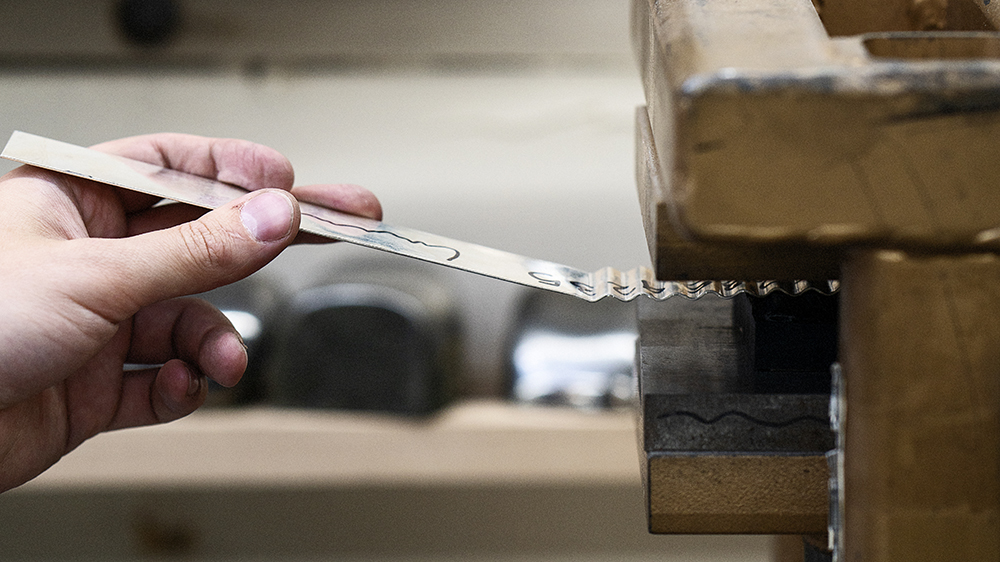 To bring Krakoff’s cardboard model to silvery life, precious materials must be bent out of shape. A sheet of sterling is pulled through a die block that applies pressure slowly, so as not to scratch the precious metal. The resulting S-shaped material will serve as each chess piece’s core. 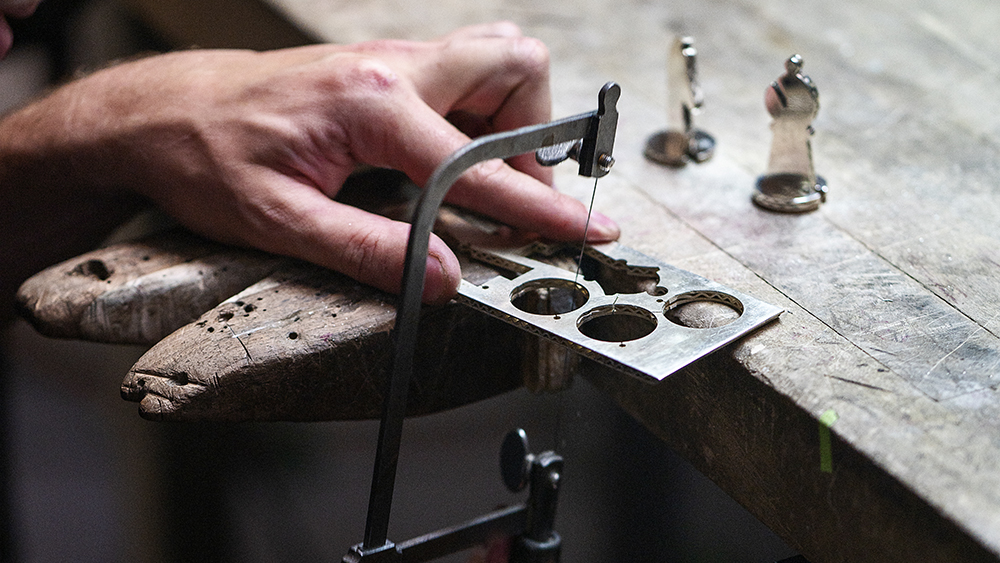 Once the S-shaped component is complete, it and two pieces of silver are cut into the shape of a knight, king or bishop using a stencil and a jeweler’s saw, a tool that’s “as old as jewelry,” say Tiffany’s smiths. 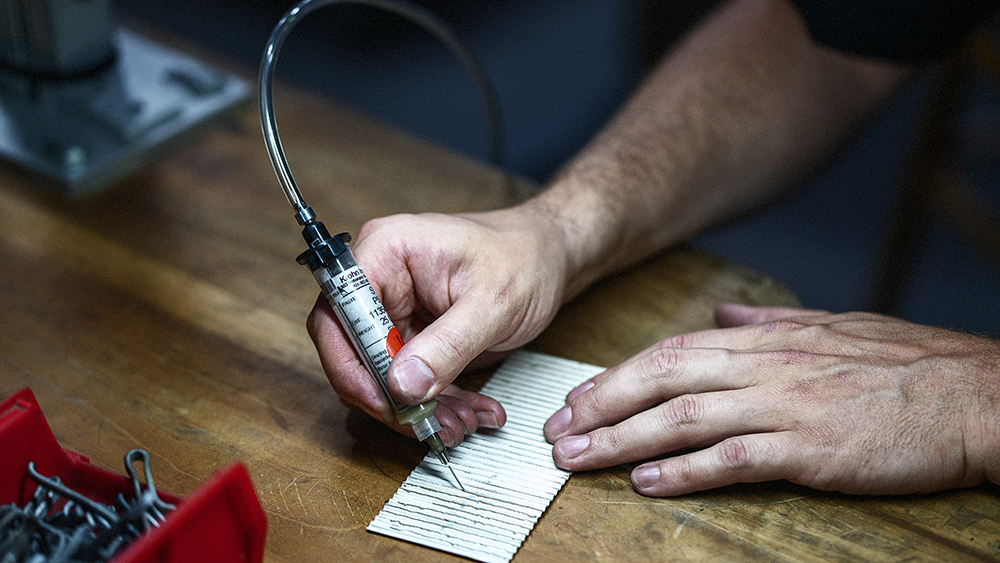 A silversmith uses a gun to apply the solder, an alloy used to bond pieces of silver together. Once the material has been applied to the high points of the corrugated ridges, the piece is then sandwiched between the two sterling cutouts, and the whole thing gets clamped together. 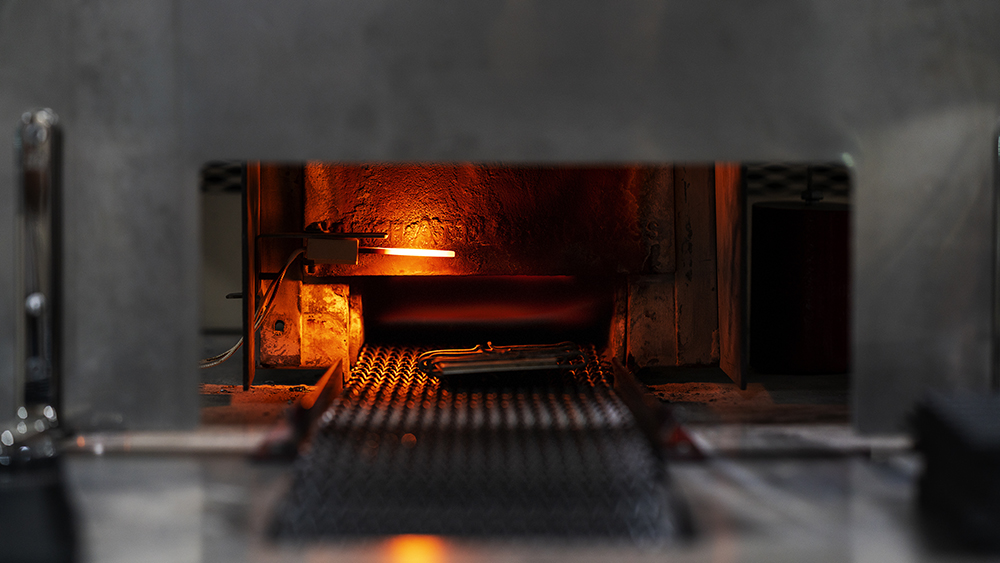 The piece passes through a hydrogen-powered, anaerobic oven that gradually brings the temperature up to 1,400 degrees. At that point, the solder melts and adheres the three components to one another before the piece slowly passes back through the conveyor belt and cools. It’s a new process for this workshop, but has been used by Tiffany for other things and is necessary to achieve the desired texture. 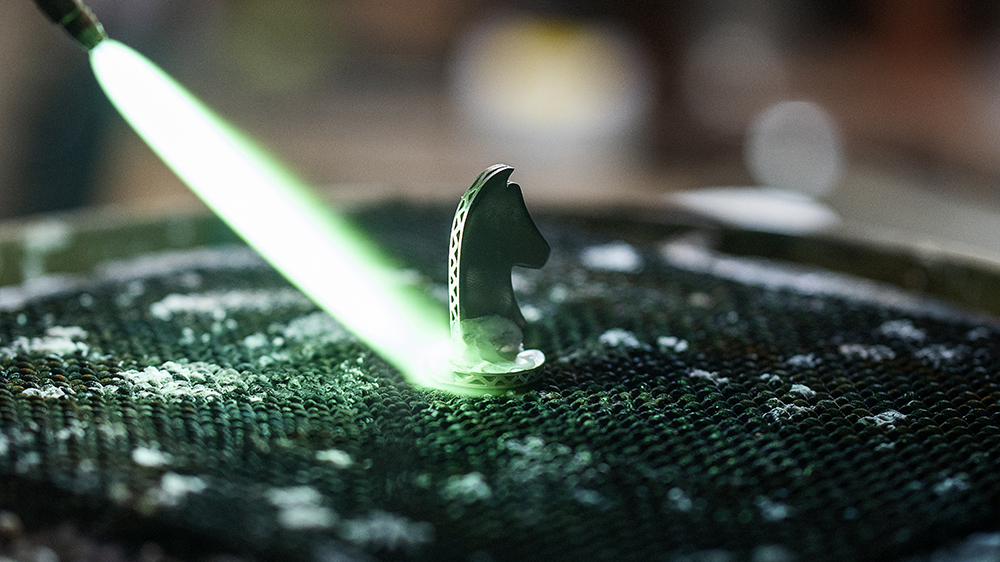 After each component has passed through the oven, a silversmith uses a hand torch to connect each to its stand. 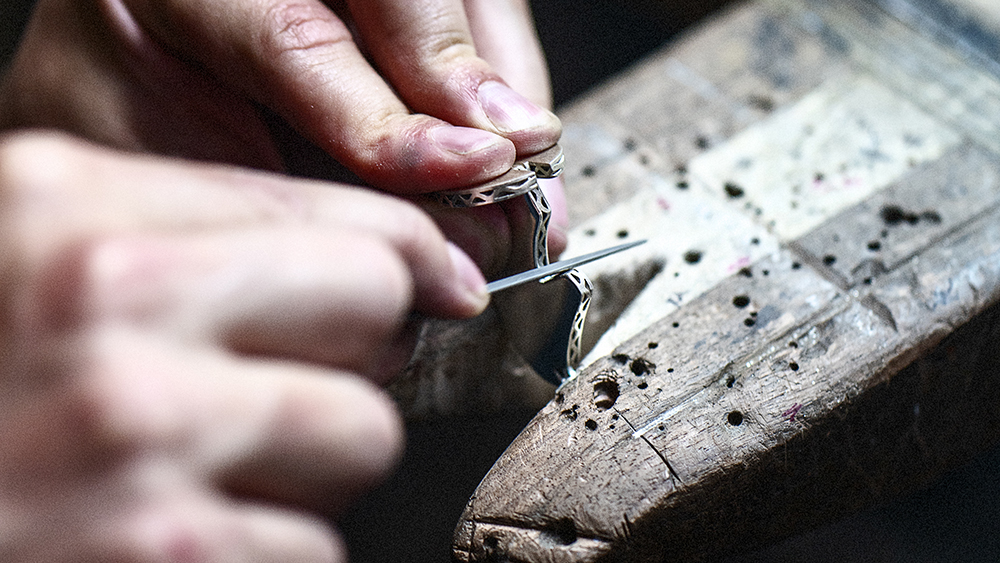 The same process for the individual pieces is followed for the board, albeit on a larger scale. However, unlike the chessmen, the board consists of two different corrugations, so distinct patterns must be pressed before it, too, is soldered together. 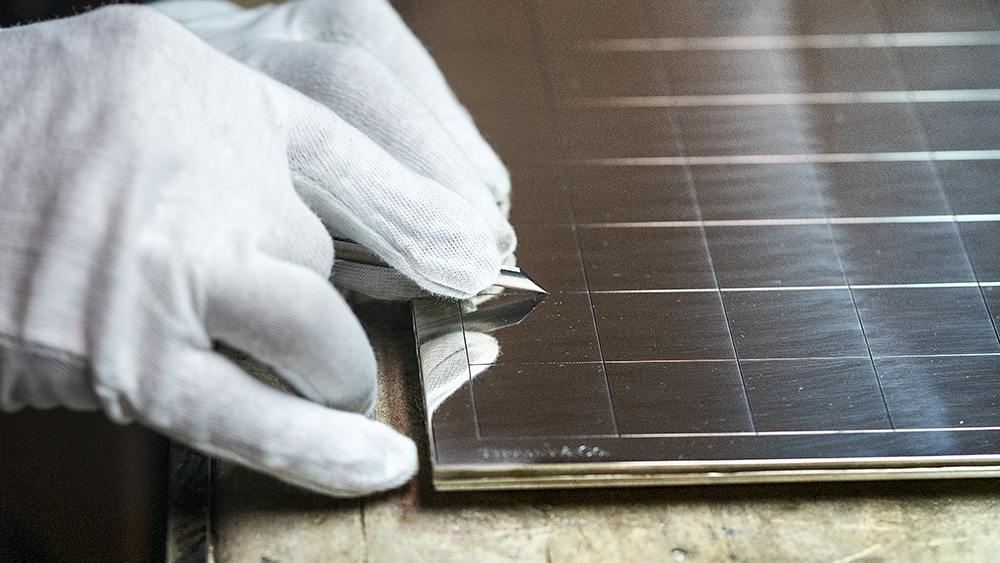 Tiffany uses a laser tool to ensure the chess board’s lines are as precise as possible. Once the lines are complete, a silversmith gives them another quick fine-tune. 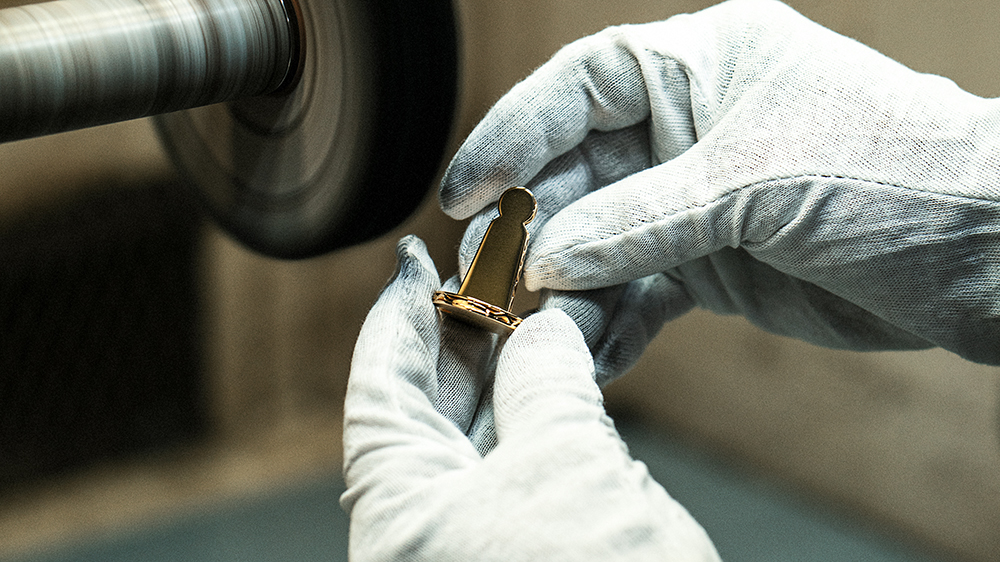 Each component is polished using a soft cotton buff and delicate cleaning compound. Just one chessman can take hours to polish to Tiffany’s sterling standards. It’s the final step before the chess set is wrapped and packaged in a silver box with wood-and-suede inserts and nestled within the traditional robin’s-egg blue Tiffany box.