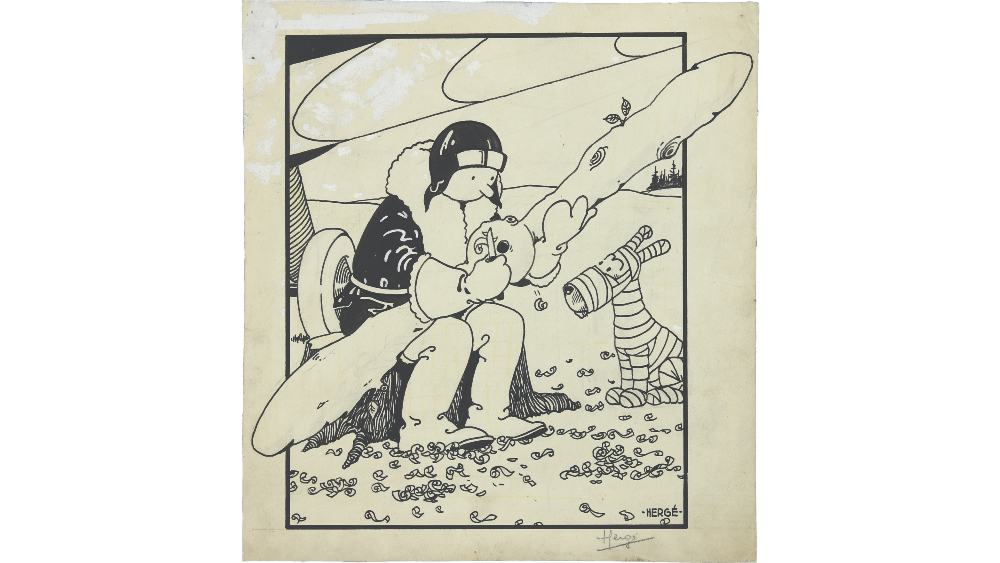 A piece of comic book history has a new owner.

The original drawing used for the first published magazine cover to feature Hergé’s Tintin sold for over $1.12 million at auction on Saturday, Heritage Auctions has announced. Part of a sale of European Comic Art held in Dallas, Texas, held over the weekend, the illustration is one of the few known privately owned cover drawings signed by the Belgian cartoonist—the vast majority are held by the Museé Hergé in Louvain-la-Neuve, near Brussels—and also one of the oldest, dating back to 1930. Neither the winning bidder or the previous owner has been identified.

The image—which appeared on the February 13, 1930, cover of Le Petit Vingtième, the children’s supplement of conservative Belgian newspaper Le Vingtième Siècle—features the intrepid young reporter, decked out in pilot’s gear, sitting atop a tree stump carving a make-shift propeller out of wood while his bandaged, faithful canine companion Snowy waits patiently at his side. Measuring 10.5 by 11.3 inches, the black and white drawing shows the early stages of Hergé’s trademark ligne claire (French for “clear line”) art style, just one of the many reasons for the enduring popularity of his Tintin work.

The comics that first appeared in Le Petit Vingtième would later be collected as the first volume of the long-running Adventures of Tintin series, Tintin in the Land of the Soviets. The storyline, intended to be an anti-Communist satire for children, would prove to be so popular that the supplement would see its page count doubled from eight to 16 pages as a result.

“Tintin is a seminal character, who has been loved and admired for generations the world over,” said Joe Mannarino, a Director of Comics and Comic Art at Heritage Auctions. “His popularity is as great now as it has ever been.”

Nearly 90 years after it was first published, Tintin in the Land of the Soviets is now looked upon as among the weakest work of Hergé’s career, frequently criticized as both “crude” or “primitive” by his lofty standards. Unlike other books in the series, it was never published in color during his lifetime, leading some scholars to wonder if he was embarrassed by the story.

Despite this, the volume would lay the groundwork for 22 beautifully drawn, action-packed Tintin adventures before Hergé’s death in 1983 (a partially completed 23rd, Tintin and Alpha-Art, was published posthumously). While only the globetrotting journalist and his dog are present in Tintin in the Land of the Soviets, the cartoonist would build out a rich and equally beloved cast of characters, including Captain Haddock, Professor Calculus and incompetent crime solving duo Thompson and Thomson over future volumes. Since first appearing in 1929, the character’s escapades have been translated into 110 languages and sold over 250 million Tintin copies worldwide.