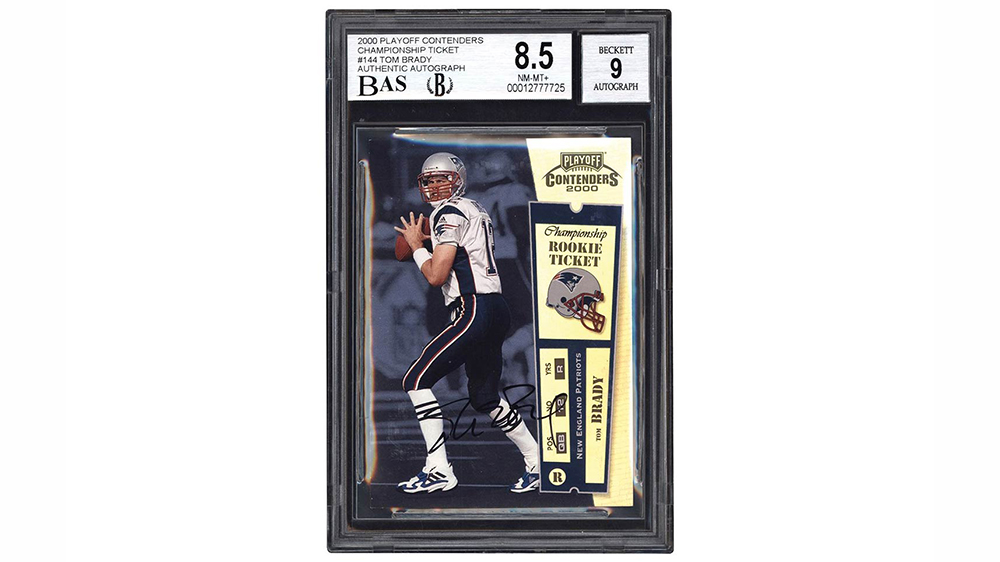 Last April, a signed Tom Brady Rookie Ticket card sold for a record-breaking $2.25 million in an online auction held by Lelands. If you weren’t able to place a bid on the rare card then, though, don’t fret: Another 2000 Championship Ticket card, autographed by the NFL GOAT, just landed on the auctioneer’s website—and this one could very well be yours.

Numbered as 99/100, the card is referenced as “one of the highest quality specimens to come to market” in the listing, thanks to its NM-MT+ 8.5 grade. Its high marks come directly from Beckett Grading Services, or BGS, which uses a 10-point grading scale to communicate the conditions of authenticated cards; only seven have been graded higher that this one. The rookie card was listed with a starting bid of $250,000 and, as of this writing, has a current bid of $407,244. With 17 days left on auction, it’s estimated to sell for between $1.5 and $2 million.

BGS’s sub-grades—which are based on the card’s centering, corners, edges and surface—further highlight the well-kept condition of this trading unicorn. For perspective, it’s centering received a 9.5, corners 8.5, edges 8.5 and surface an 8. Brady’s bold signature even received a 9/10 on the highly-regarded scale. The card will reach its new owner in a protective cardholder that features the Beckett Authentication Services (BAS) seal of approval in its top right corner along with the silver label given to cards graded 8.5 to 9 on the scale.

The back of Brady’s 2000 Championship Ticket card.  Courtesy of Lelands

Before the auctions of both Championship Ticket cards, a rare 2000 Playoff Contenders edition signed by the star quarter back sold for $555,988 on eBay in January 2021. While it shows Brady’s former New England Patriots stats, just like the other cards, this edition received a PSA Gem Mint 10, according to CNN, meaning it was sold in perfect condition. The card was reviewed by PSA, or Professional Sports Authenticator, the largest third-party trading card authentication and grading company worldwide, which has certified over 40 million cards and collectables to date.

To place your bid on the latest 2000 Tom Brady Championship Ticket card, visit Lelands.com before January 29. The auction is being held in conjunction with the Mint Collective, which will also host another exclusive sports memorabilia event from March 25-27 in Las Vegas.