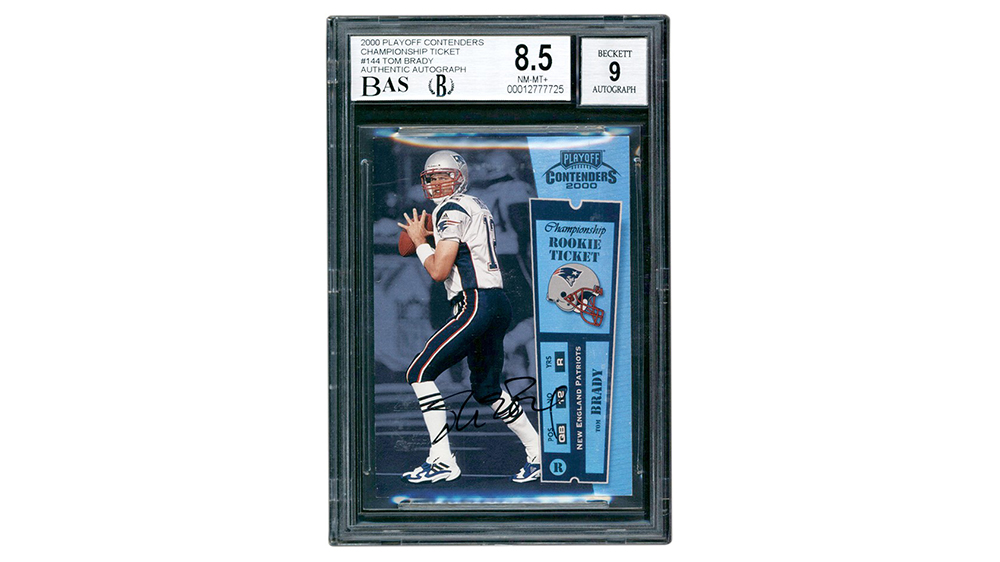 Two months after leading the Tampa Bay Buccaneers to the Super Bowl trophy in his first season with the team, the quarterback’s signed rookie card sold for $2.25 million, according to Bleacher Report. That price is nearly a million dollars more than another example of the same card sold for last month, easily making it the most expensive football trading card of all time.

The record was set in an online auction held by Lelands on Friday night. The 2000 Playoff Contenders Championship Rookie Ticket card, which is limited to just 100 examples, is widely considered to be the most desirable Brady rookie card. This particular example, labeled no. 99, was also signed by the quarterback. Beckett Grading Service has given the card an 8.5 grade, meaning it’s in near mint condition, while the autograph is rated 9.0. The sale breaks a record set only weeks earlier by an 8.0-grade Brady Rookie Ticket card that sold for $1.32 million.

First purchased over a decade ago on eBay, the card had been stored in a private collection until it was listed by Lelands in late February, one of only a “handful” of times a Brady Rookie Ticket card has gone up for sale. Despite its good-but-not-great grading, the auction house said “the autograph compares favorably for eye appeal and signature strength with any other graded 10 on the market, if not better than other 10’s we have seen.”

No one seems more surprised by the card’s gavel price than Brady himself. In an interview with Good Morning America on Wednesday, the quarterback said, “It’s surreal and it makes me want to go check all my cards that I have stored again; there’s got to be one [more] in there somewhere. I kept all these cards for all these years.”

Friday’s sale is just the latest record set by a sports card since the start of the pandemic. Last month, a rookie card for NBA star Luka Doncic sold for $4.6 million, shattering the previous high mark for a basketball card by $2.8 million. And in January, a PSA 9-graded example of baseball legend Mickey Mantle’s iconic 1952 Topps rookie card sold for a stunning $5.2 million, making it the most expensive sports card of all time.