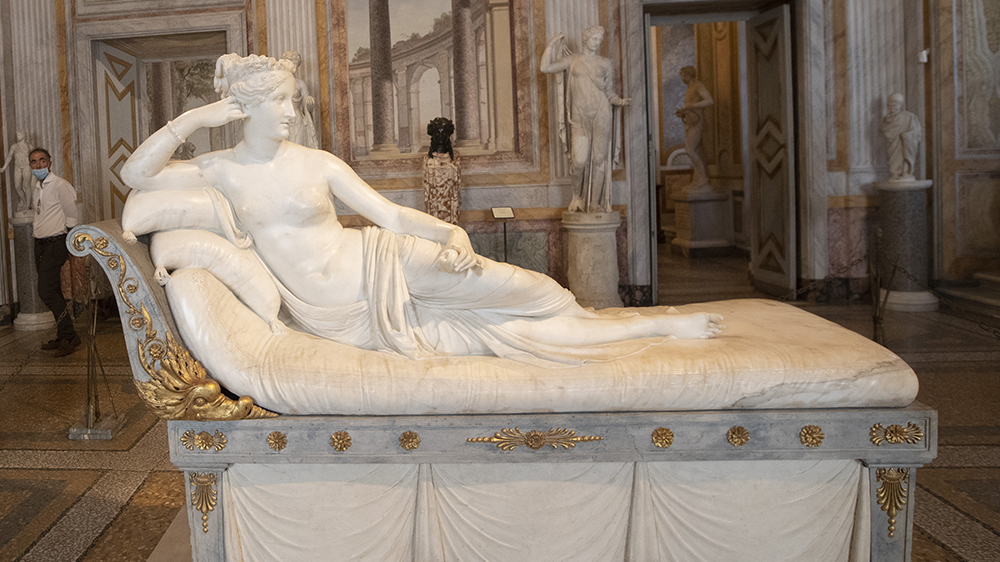 Imagine wanting the perfect snapshot from your vacation so badly that you end up damaging the thing you wanted to pose with? That may sound like a scenario straight out of a network sitcom, but it’s a real world situation that an Austrian tourist recently found himself in after he snapped three toes off a 19th-century statue while posing for a photo.

A 50-year-old man has been identified by authorities as the person who inadvertently damaged a plaster-cast model of Antonio Canova’s statue of Paolina Bonaparte while posing for a picture at the Gipsoteca Museum in Possagno, Italy, on July 31, reports CNN. The unnamed man was captured by security camera breaking three toes off the foot of the sculpture while sprawling across its base for the photo.

In the footage, the man, who wore a t-shirt, shorts and a face covering, can be seen reclining on top of the sculpture while a woman believed to be his wife snaps his picture. He seems to realize something is wrong as soon as he gets up, looking down at the statue’s feet with concern, then sheepishly circling the artwork figuring out what he should do. But apparently what he decided to do did not involve owning up to his mistake.

The damage, which saw three toes broken off the statue’s right foot, was only discovered after the couple had left. But the man wound up being identified because his wife had left their personal information with the museum for potential coronavirus contact tracing purposes. When police eventually called the woman, she is said to have broken out into tears before admitting that yes, her husband had damaged the statue after sitting on it.

A close up of the damage to the statue  Carabinieri Treviso

The damaged statue is original plaster cast from which Canova carved a marble statue of Paolina Bonaparte that is on display at Borghese Gallery in Rome (which can be seen at the top of this article), according to the network. A court in Terviso is still deciding whether or not to press charges, but Vittorio Sgarbi, the president of the Antonio Canova Foundation, wrote on Facebook that the man should not “remain unpunished and return to his homeland. The scarring of a Canova is unacceptable.”

Amazingly, this isn’t the first time a piece of art has been badly damaged by inexplicably careless behavior in 2020. In February, a Mexican art critic shattered a glass sculpture she didn’t like after placing a can of soda on top of it. As outlandish as these situations may sound, they also offer up an important reminder to everyone: Don’t touch the art. And definitely don’t sit on it.