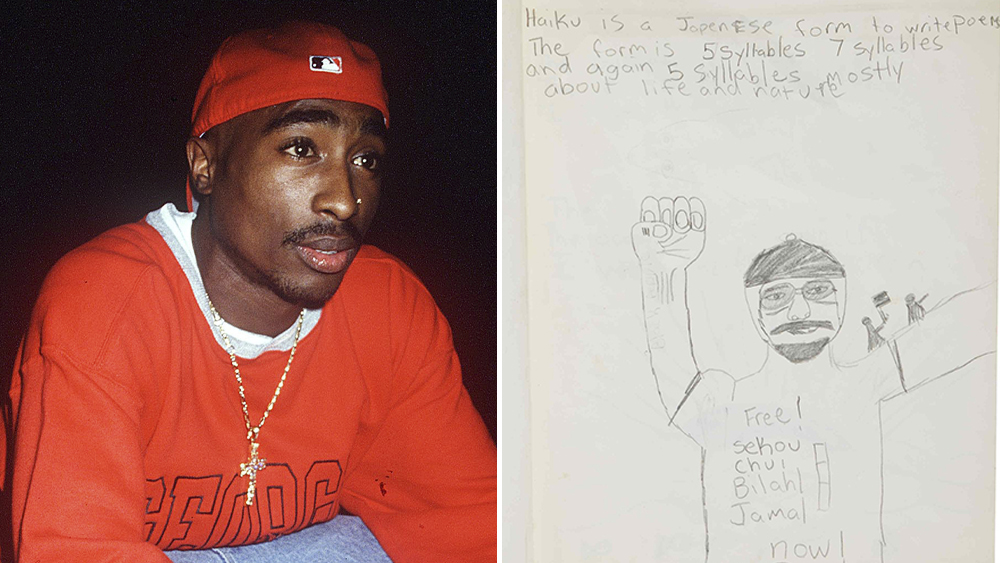 The auction house kicked off “The Art and Influence of Hip Hop” sale on Thursday and it comprises an array of influential works from some of the most legendary hip-hop musicians.

The star lot is an unpublished booklet of haikus written and illustrated by Tupac Shakur. The pioneering rapper created the literary gem when he was just 11 years old as a gift for his godfather and Black Panther activist Jamal Joseph. (It is also dedicated to three other Black Panther members: Chui Ferguson-El, Sekou Odinga and Bilal Sunni Ali.)

“I am black and proud,” writes Shakur in the booklet.  Sotheby's

The booklet was originally sent to Joseph while he was incarcerated at Leavenworth Prison and has remained in his possession for the past 40 odd years. A true artifact, it provides a unique insight into Shakur’s childhood and creative prowess. It also showcases his early gift for wordplay and lyricism, while elucidating the experiences and influences that ultimately shaped him. The acclaimed musician continued to use writing as a creative outlet to explore issues of race, masculinity, family, black liberation and incarceration before he was assassinated in 1996.

In addition to the haikus, there are a number of original drawings penned by Tupac himself. One that’s particularly poignant shows a young Shakur sleeping with a pen in hand while dreaming of the Black Panthers being freed from prison. He also finishes the booklet by telling everyone to be strong and signing it as “Tupac Shakur. Future Freedom Fighter.”

A young Tupac dreaming of the Black Panthers being free.  Sotheby's

Sotheby’s says the booklet is the rapper’s earliest known manuscript and has labeled it “incredibly rare.” As a result, it’s expected to fetch between $200,000 and $300,000. There is also a small number of Shakur’s poetic love letters on offer that were written to a high school sweetheart at age 17.

The online auction, which is open for bidding through March 30, features art, apparel, photographs, studio equipment and other important artifacts connected to hip-hop royalty. The list includes heavy-hitters such as Chuck D, Jazzy Jay, Ice T, Crazy Legs, Danny Hastings and many more.

The rapper finishes the booklet by telling everyone to be strong.  Sotheby's

“From the ’70s to the present, from the East Coast to the West, the ‘Art and Influence of Hip Hop’ seeks to represent and honor the voices and visionaries who continue to move the crowd and redefine culture,” Cassandra Hatton, Sotheby’s global head of science and popular culture, said in a statement.

Don’t worry, we won’t end with another haiku—we’ll leave that to artists like Shakur.