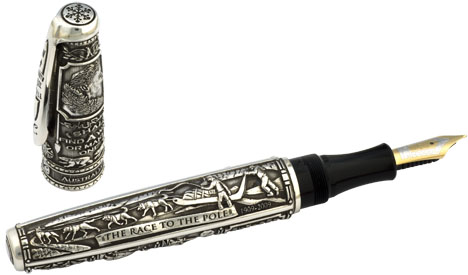 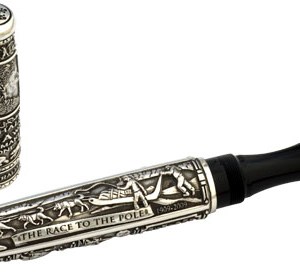 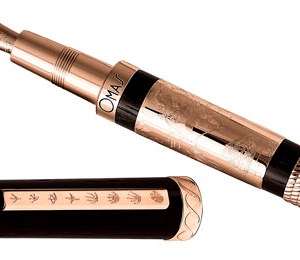 As the HMS Beagle headed for the Galapagos Islands, Charles Darwin wrote two words on the first page of his journal: “I think.” In 1859, a version of that journal became The Origin of Species. Italian pen maker Omas has—in collaboration with the Charles Darwin Foundation, which celebrates its 50th anniversary in 2009—released a new series of commemorative writing instruments dedicated to the naturalist and author.

Each “I Think” pen is fashioned from one of three precious metals and mature oak wood, the same material used to construct Darwin’s famous ship. The route that the HMS Beagle followed to the Galapagos adorns the reservoir, animal footprints are engraved along the clip, and a mockingbird shape appears on top of the cap. As an allusion to the influence Darwin’s work has had on the entire scientific community, a double-helix pattern decorates a band near the bottom of the cap. Fountain pens and roller-ball versions are available in sterling silver (from $2,300) and gold (from $15,525). The rose gold “I Think” fountain pen with diamonds is $22,960. (www.omas.com)

Another historical celebration comes from Curtis of Australia , which commemorates the 100th anniversary of the historic exploration of the North Pole with Race to the Pole, the latest addition to its collectible, limited-edition Adventure Series. The sterling-silver pen designed to honor Americans Robert Peary and Matthew Henson’s first successful expedition to the North Pole in 1909 features finely detailed images in relief of the SS Roosevelt, the specially commissioned vessel built to survive in the Arctic ice; the dog sleds; and the names of the four Inuits who also reached the top of the world. The roller-ball version is $2,250, and the fountain pen with two-tone 18-karat nib is $2,500. A gold edition adorned with a diamond is available for $35,000. (www.curtisaustralia.com)