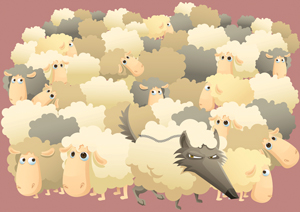 In a new UCLA study, researchers, led by Robert L. Modlin, MD, chief of dermatology, demonstrate that certain bacteria can pretend to be viruses when infecting humans, allowing them to hijack the body’s immune response so that they can hide inside our cells. The findings may also help explain how viral infections like the flu make us more susceptible to subsequent bacterial infections such as pneumonia.

When bacteria pretend to be viruses, the immune system launches an attack with a protein, interferon-beta, that is designed to fight viruses and also blocks the action of interferon-gamma, to the advantage of bacteria. Further, if a real virus were to trigger interferon-beta, it would divert the attention of the immune response, preventing an attack on the bacterial invader. This may explain why flu can lead to a more serious bacteria-based infection like pneumonia.

The new findings may indicate why, in winter, residents of crowded neighborhoods are at added risk for TB. Because of colder nighttime temperatures, indigent homeless people tend to stay in shelters, where they live closely with others, facilitating the spread of influenza. The body’s immune system could then be diverted by the flu virus to produce interferon-beta, blocking an effective immune response to the TB bacteria. And the drop in vitamin D levels due to decreased sunlight during winter months could further diminish the ability of individuals’ immune systems to kill the TB bacteria.