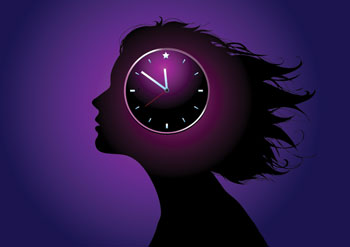 A study by researchers at UCLA and in Japan suggests a way to predict when a woman will have her final menstrual period. The findings could help women and physicians gauge the onset of menopause-related bone loss, which generally begins a year prior to the last period. The researchers used women’s ages, menstrual bleeding patterns and measurements of hormone levels to estimate the amount of time until they were likely to reach menopause, says the study’s lead author, Gail Greendale, MD, professor of medicine in the Division of Geriatrics.

Women who are approaching menopause often ask their healthcare providers when they will be done with their periods, but the information is sometimes more telling than women realize, Dr. Greendale says. “Being able to estimate when the final menstrual period will take place has taken on importance beyond just helping women gauge when they will stop having periods. We know that potentially deleterious physiological developments, such as the onset of bone loss and an increase in cardiovascular risk factors, precede the final menses by at least a year.”

The researchers used data collected annually for up to 11 years on 554 women, including Caucasians, African Americans, Hispanics and women of Chinese and Japanese descent, participating in the multi-site, multi-ethnic Study of Women’s Health Across the Nation. At enrollment, the women were between the ages of 42 to 53, had an intact uterus and at least one ovary, were not using medications affecting ovarian function and had experienced at least one menstrual period in the prior three months.

The researchers measured levels of estradiol (E2), a hormone produced by the ovaries, and follicle stimulating hormone (FSH), which comes from the pituitary gland and triggers the production of eggs. FSH starts increasing and E2 starts decreasing about two years prior to the final menstrual period, or about a year before bone loss and cardiovascular risk factors rise.

The study found that the levels of the two hormones could be used to estimate whether or not women were within two years of beginning their final menstrual period, within one year or beyond their final period. The study had some limitations, including its modest sample size. In addition, hormone levels were sampled once a year, and more frequent sampling might have allowed the researchers to more precisely estimate each woman’s place on the timeline.

“Predicting the Timeline to the Final Menstrual Period: The Study of Women’s Health Across the Nation,” Journal of Clinical Endocrinology and Metabolism, April 2013