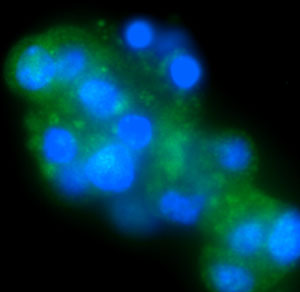 UCLA researchers have isolated a new population of primitive, stress-resistant human pluripotent stem cells that are easily derived from fat tissue and are able to differentiate into virtually every cell type in the human body without genetic modification. The cells, called multi-lineage stress-enduring stem cells from adipose tissue (Muse-AT), were discovered by “scientific accident,” when a piece of equipment failed in the laboratory, killing all the stem cells in an experiment except the Muse-AT cells.

The UCLA team further discovered that not only are Muse-AT cells able to survive severe stress, they may even be activated by it, says Gregorio Chazenbalk, PhD, associate researcher in obstetrics and gynecology and a scientist with the Eli and Edythe Broad Center of Regenerative Medicine and Stem Cell Research at UCLA. These pluripotent cells, isolated from fat tissue removed during liposuction, expressed many embryonic-stem-cell markers and were able to differentiate into muscle, bone, fat, cardiac, neuronal and liver cells. An examination of their genetic characteristics confirmed their specialized functions, as well as their capacity to regenerate tissue when transplanted back into the body following their “awakening.”

“This population of cells lies dormant in the fat tissue until it is subjected to very harsh conditions,” Dr. Chazenbalk says. “These cells can survive in conditions in which usually only cancer cells can live. Upon further investigation and clinical trials,” he added, “these cells could prove a revolutionary treatment option for numerous diseases, including heart disease and stroke, and for tissue damage and neural regeneration.”

Purifying and isolating Muse-AT cells does not require the use of a cell sorter or other specialized high-tech devices. The cells are able to grow either in suspension, forming cell spheres, or as adherent cells, forming cell aggregates very similar to the embryoid bodies derived from human embryonic stem cells.

“This research offers a new and exciting source of fat stem cells with pluripotent characteristics, as well as a new method for quickly isolating them,” Dr. Chazenbalk says. “These cells also appear to be more primitive than the average fat stem cells, making them potentially superior sources for regenerative medicine.”

“Awakened by Cellular Stress: Isolation and Characterization of a Novel Population of Pluripotent Stem Cells Derived from Human Adipose Tissue,” PLOS ONE, June 5, 2013