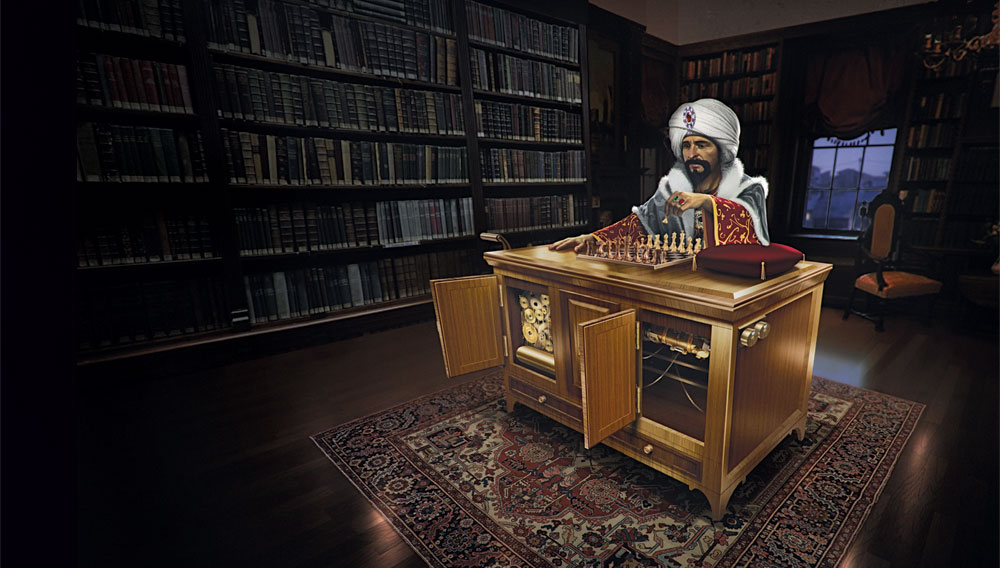 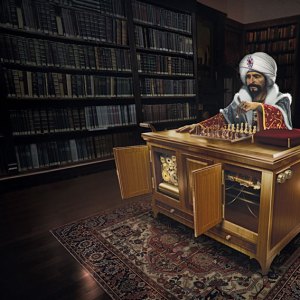 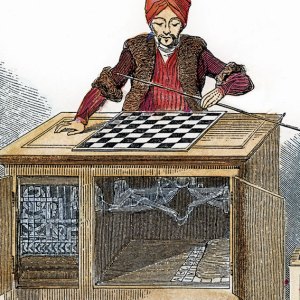 A modern replica of the Turk, a chess-playing automaton that defeated Benjamin Franklin, chided Napoléon Bonaparte for cheating, and enchanted the elites of the 18th and 19th centuries.

$1.5 Million for the Electronic Version or $1.2 Million For the Classic Design

The wondrous creation dubbed the Turk originated from a royal dare. In 1769, Maria Theresa, the Holy Roman empress, invited Wolfgang von Kempelen, a brilliant, scientifically minded civil servant, to view a performance by a traveling French magician and explain his tricks to her.

After watching, Kempelen essentially told the empress, “I can do better.” Intrigued, she gave him six months to back up his boast. Kempelen did so by designing an automaton that took the form of a life-size turban-wearing man. He was carved from wood and seated behind a cabinet equipped with wheels and topped with a chessboard.

At its unveiling in 1770, Kempelen spun the machine around on its wheels so that its back faced the audience that the empress had invited. He then opened various doors on the cabinet, revealing the clockwork inside. Satisfied that he had proven that no person was hiding in the cabinet, he closed the doors, turned the machine again so that the wooden man was facing the audience, and summoned the first opponent. When Kempelen turned a keythat was inserted in the machine, the mechanical man rattled to life, played a game of chess, and won. The audience was astonished and delighted.

The performance marked the beginning of an illustrious career for Kempelen’s creation, which was called the Turk because of its style of dress. In 1783, Benjamin Franklin visited Kempelen in Paris to match wits with the machine, and lost. Around the same time, the best chess player in Europe, François-André Danican Philidor, consented to do battle. He beat the Turk, but admitted that the contest wore him out in a way no match with a human opponent ever had. Napoléon Bonaparte took time away from his duties as the emperor of France to grapple with the machine in 1809 in Vienna. After continually discouraging Napoléon’s attempts to cheat, the Turk finally shook its head and swept the pieces off the board with one of its arms.

Charles Babbage, considered by many to be the father of the computer, played the Turk in 1820 in London. He was defeated but came away convinced that human intelligence was involved, and began pondering whether a real chess-playing machine was possible. Such thoughts planted the seed that would blossom into IBM’s Deep Blue, which generated headlines worldwide in 1997 when it triumphed over the chess wizard Garry Kasparov.

Edgar Allan Poe saw the Turk perform in Richmond, Va., and published his conclusions on how it worked in an 1836 essay. He advanced a strong case for a live operator, citing in support, among many other observations, the fact that the Turk knew when its challenger was a poor player—it would roll its eyes and shake its head during games when it was romping to a victory.

The Turk ultimately found its way to a Philadelphia museum, where it was lost in a fire in 1854. Shortly afterward the truth emerged: A human chess player who controlled the automaton was concealed in the cabinet. An intricate system of folding partitions enabled the person to remain hidden when the cabinet’s doors were open.

Now McCune Design of Van Nuys, Calif., is planning to re-create the Turk. The company is named for its founder, the late special-effects wizard Grant McCune, who furnished the original Star Wars with its spaceships and its Death Star and also created the cavorting gopher in Caddyshack. For almost 20 years, the company has been building enchanting and beguiling bespoke music-box automata. They have brought the dodo bird back to life, created a miniature movie theater that screens a film, and sent a tiny coal car on a harrowing journey up and down a petite mountain. “I think Fabergé eggs are simpler than what we do,” says Monty Shook, project manager, only half joking.

McCune Design is offering two different takes on the Turk: a classic version designed as Kempelen’s original was—with concealed accommodations for a human chess player—and a contemporary computer-driven version that functions as Babbage once imagined it might. The calculating power needed to sift through millions of chess gambits in seconds can now fit on a hard drive that could be concealed within the cabinet and could run off of a standard home electrical current.

Both versions of the Turk will feature a cabinet that is 36 inches tall, 60 inches wide, and 30 inches deep. The Turk figure will be 6 feet tall, seated. Buyers can choose from an array of hardwoods and veneers and brass gears and fittings for their machines. As for the Turk figure itself, Shook envisions a face that is “a little more anatomically correct, less carved, and more realistic” than Kempelen’s. “I want it to look a little intimidating,” he says, “but not terrifying.”

Each version of the Turk requires a minimum of nine months to complete.