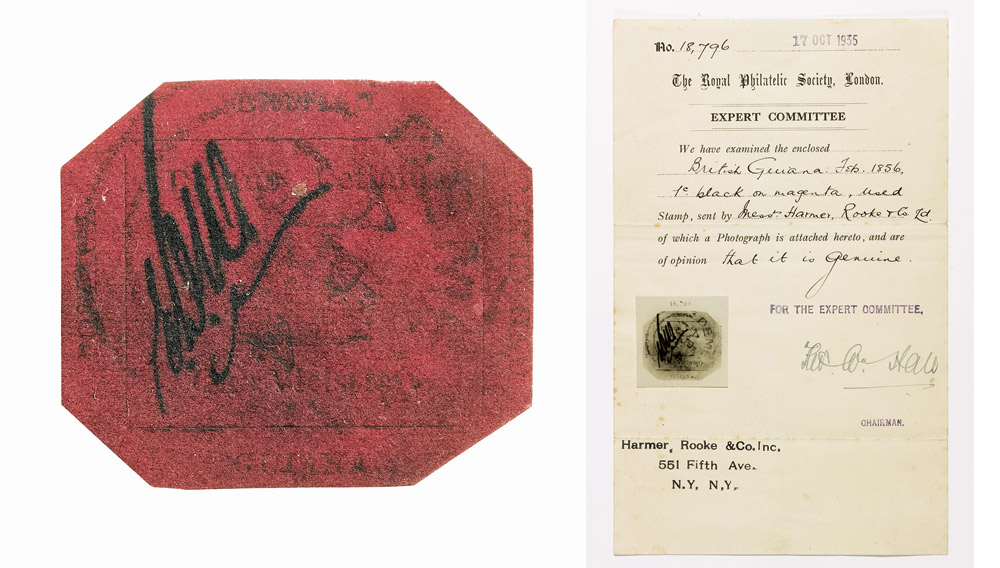 The British Guiana Magenta stamp could sell for $10 million or more at auction in June.

When the convicted murderer and DuPont chemical-company heir John E. du Pont died in prison four years ago, it marked the conclusion of a bizarre saga. His death also meant that the British Guiana One-Cent Magenta—the world’s most coveted philatelic treasure—soon would be back on the market.

Du Pont acquired the stamp—the only remaining example from a special series issued in 1856—in 1980 for $935,000. It will go to auction June 17 in New York at Sotheby’s with a value estimated at $10 million to $20 million. The current auction-record price for a stamp belongs to the Treskilling Yellow, an 1855 Swedish stamp that in 1996 sold for 2.9 million Swiss francs, which at the time was worth about $2.2 million.

Du Pont, a benefactor of wrestlers and other Olympic athletes, converted his 800-acre estate in Pennsylvania into a camp for wrestlers in the 1990s. In 1996, he shot and killed the 1984 gold-medal-winning Olympic wrestler David Schultz, who was living and training at the camp. At his trial, the jury found du Pont guilty of murder but mentally ill, after the defense had argued that he was a paranoid schizophrenic. Du Pont died in 2010 at age 72 while serving a 13- to 30-year sentence. His estate is now selling the Magenta, which was last displayed publicly at Ameripex ’86, a stamp exhibition held in Chicago 28 years ago.

The stamp’s first known owner was L. Vernon Vaughan, who discovered it in 1873 in the British Guiana (now Guyana) town of Demerara. Vaughan, who was 12 at the time and had traveled from Scotland to the British colony to live with his family, found the stamp among a batch of family papers. Not long afterward, he sold it for six shillings.

The stamp is heavily postmarked and bears a set of initials in accordance with the policy of the local postmaster at the time. When a stamp shipment from England was delayed, the postmaster authorized the emergency printing of stamps by a local newspaper company in Georgetown, British Guiana. The company printed 1-cent and 4-cent denominations in black ink on magenta paper and a 4-cent denomination on blue paper. As a precaution against forgery, the postmaster ordered the postal clerks to initial each stamp. Thus E. D. Wright’s “EDW” obscures the Magenta’s image of a ship in profile and the inscription of the colony’s motto, Damus petimus que vicissim (We Give and Expect in Return).

In 1878, the stamp was sold for £150 to the French collector Philippe la Renotière von Ferrary, whose collection, upon his death in 1917, was willed to a Berlin museum and then seized by the French as war repatriations following World War I. The industrialist and noted philatelist Arthur Hind of New York purchased the Magenta in 1921 at one of the ensuing auctions for what was then an extraordinary sum of $36,000. Though dubious, a rumor persists that Hind, who was obsessed with the Magenta, purchased the only other known example and destroyed it to ensure that his first specimen remained unique.

Hind died in 1933, and his will directed that his stamp collection be sold for the benefit of his estate. But his widow contested the will, claiming that Hind had given the stamp to her. She succeeded in gaining possession of the Magenta and in 1940 sold it through Macy’s department store for at least $40,000 to the collector Frederick Small.

When Small auctioned his entire collection in 1970, the stamp was sold to a group of investors for the then-record price of $280,000. Ten years later, du Pont acquired the Magenta for another auction-record price. In all likelihood, when the Magenta is sold again in June, it will reclaim its status as the world’s most valuable stamp.