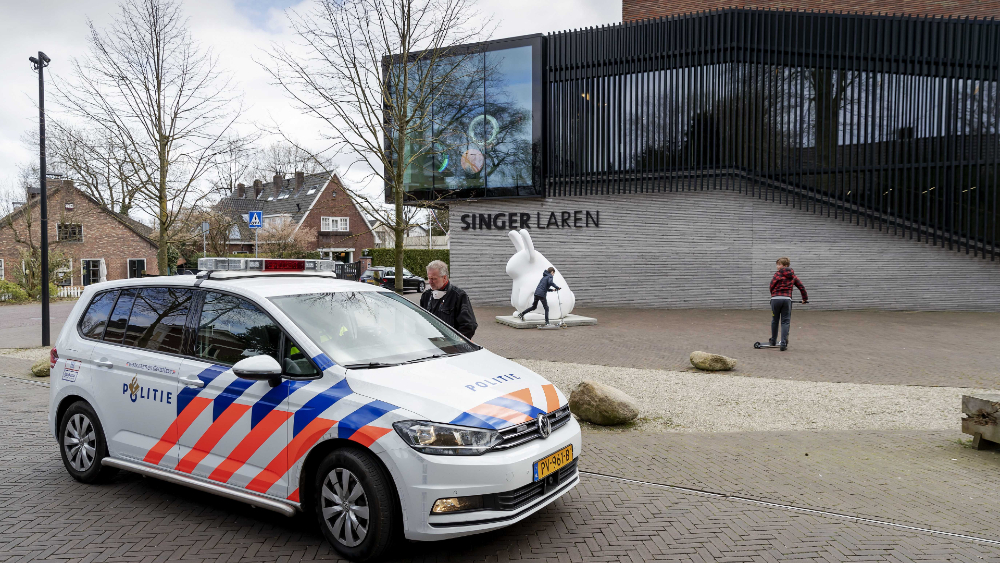 On Vincent van Gogh’s 167th birthday, thieves commemorated the towering artist by stealing one of his works from a Dutch museum.

At about 3:15 am on Monday morning, thieves smashed the glass front doors at the Singer Laren Museum in the Netherlands and took The Parsonage Garden at Nuenen in Spring, the NL Times reports. The burglar alarm was triggered, but by the time the police arrived, the culprits had already made off with the Post-Impressionist’s 1884 work, which was on loan from the Groninger Museum. The Singer Laren had been closed since early March due to the Covid-19 pandemic.

The oil painting was made during a two-year period when Van Gogh was living in Nuenen with his parents in a Dutch Reformed Church parsonage—his father was pastor there. Between 1883 and 1885, the artist documented the changing seasons in a series of paintings of the parsonage garden, and the stolen work was among them. Van Gogh also completed his first major painting, The Potato Eaters (1885), while in Nuenen. Shortly afterwards he decamped to Antwerp, and then again to Paris in 1886.

“The Parsonage Garden at Nuenen in Spring,” which was stolen from the Singer Laren Museum yesterday.  Marten de Leeuw/EPA-EFE/Shutterstock

Though the exact value of The Parsonage Garden is unknown, Van Gogh’s paintings traditionally sell for tens of millions at auction—the artist’s current record is $82.5 million for Portrait of Dr. Gachet (1890). That price made the work the most expensive painting in the world at the time it was sold in 1990.

Of course, this is hardly the first Van Gogh to be stolen: Two paintings were pilfered from the Van Gogh Museum in Amsterdam in 2002, and were not recovered until almost 15 years later in Italy in 2016. Twenty more Van Gogh works were briefly stolen from the same museum in 1991—The Potato Eaters among them—in an incredible inside job that came to an abrupt end moments after it happened. The paintings were recovered just 35 minutes after being stolen when the thieves’s getaway car got a flat tire.

“The Potato Eaters,” one of Van Gogh’s most well-known early works, was briefly stolen from the Van Gogh Museum in 1991.  Universal History Archive/Shutterstock

And although this is the Singer Laren’s only Van Gogh work—the museum primarily serves to house the modernist collection of William and Anna Singer—it’s also no stranger to art heists. In 2007, a break-in claimed seven statues from the museum garden, including a bronze cast of Rodin’s The Thinker, which was eventually found, albeit in damaged condition.

The Parsonage Garden, meanwhile, is the only Van Gogh work in the Groninger’s permanent collection. “It is very bad for the Groninger Museum, it is very bad for the Singer, but it is terrible for us all,” Jan Rudolph de Lorm, director of the Singer Laren, said at a press conference yesterday. “Art exists to be seen and shared by us, the community, to enjoy to draw inspiration from and to draw comfort from, especially in these difficult times.” As of press time, the art thieves were still at large.