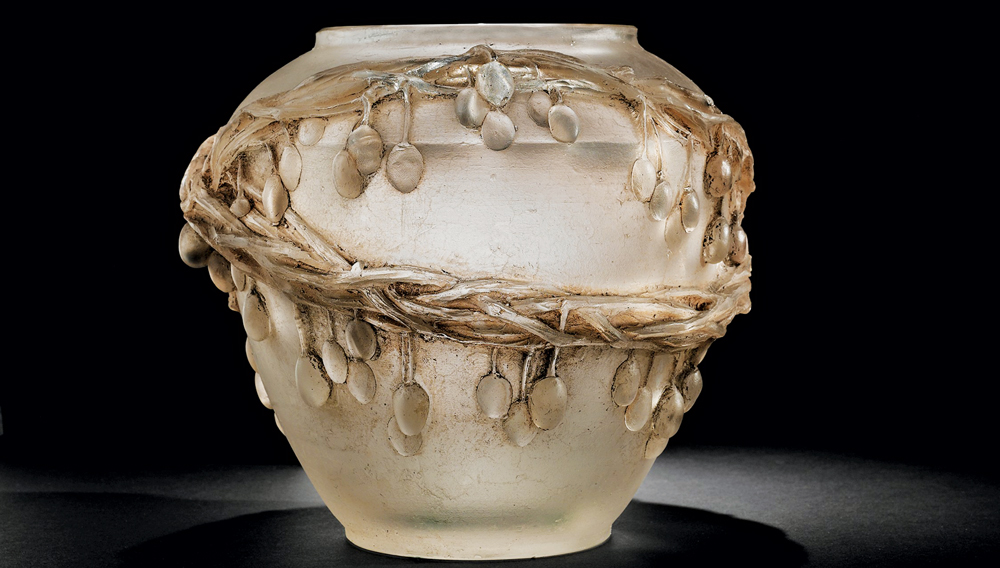 Lalique’s designs and colors continue to hold the attention of collectors.

René Lalique is known for many forms of glass art: statuettes, perfume bottles, and hood ornaments, to name three. But his most popular items were his vases. “He made more vases than he made of anything else,” says David Weinstein, president of the DJL Lalique gallery in Glen Cove, N.Y. “The foremost 20th-century glass designer chose vases as his major form of expression.”

During Lalique’s heyday, in the early part of the last century, he created hundreds of vase designs, and according to Nick Dawes, a Lalique expert at the New York office of Dallas-based Heritage Auctions, the vases expressed Lalique’s entrepreneurial spirit as much as his artistry. Whatever the item, says Dawes, Lalique’s namesake company would make as many as it could sell. Thus it is not uncommon for as many as 2,000 examples of a top-selling pre–World War II vase design to survive in a variety of colors and finishes. “Lalique did not recommend putting flowers in them. [The vases] get stained pretty quick,” says Dawes. “They were generally designed to stand on their own as beautiful objects.”

The vases remain as popular now as they were when they were new. High-quality examples routinely sell for five-figure prices at auction, and bids for the finest and rarest ones can reach six figures. At a Sotheby’s auction in 2010, a one-of-a-kind Baies de Cornouiller vase from 1914 sold for $494,500.

The rarer the color of the vase, the greater the demand for it. Last year, Heritage sold a cased butterscotch version of Lalique’s Archers vase—a design adorned with images of nude men shooting arrows at birds—for $17,500. “For every butterscotch example of the vase, you see 50 to 100 in other colors,” says Dawes. The color is scarce, he says, because it is difficult to create. He likens the technique to blowing up two balloons—an opalescent one inside of a yellow one.

An ideal pairing of color and design pushes the price higher still. Last year in London, Christie’s sold a Sauterelles vase for nearly $97,000, which is an auction-record price for that design. The 1912 motif depicts grasshoppers on blades of grass; the vase’s color was lime green. “I’ve never seen that color appear at auction before,” says Joy McCall, director of the 20th-century-design department at Christie’s. A Heritage auction last year featured a peacock-blue Borromée vase, a 1928 design decorated with a flock of peacocks. “It’s a great example of Lalique applying a color to a motif, as he did occasionally,” says Dawes. “I suspect the color was created for it.” The Borromée sold for $46,875.

A Heritage sale on November 23 will feature a Palestre vase, a relatively large (almost 16 inches tall) design dating to 1928 that features Greco-Roman athletes. Perhaps as many as 20 examples exist. The vase, made of frosted glass, has a presale estimate of $80,000. Christie’s sold a similar Palestre three years ago in New York for a staggering $362,500. “Nobody is sure why it made the record that it did,” says McCall. “It simply caught the imagination on the day and performed accordingly.”