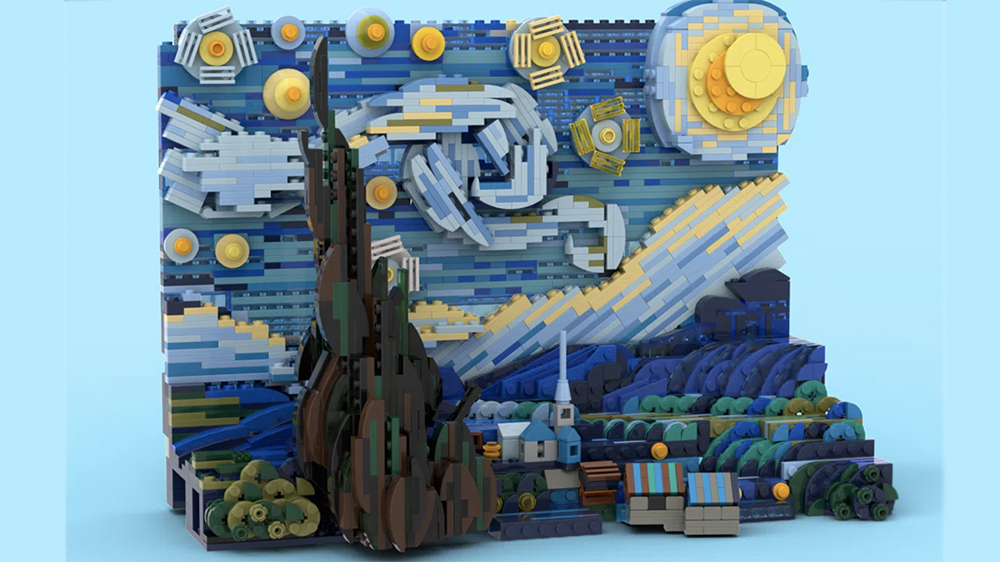 For decades, all you’ve needed to reproduce Vincent van Gogh’s 1889 painting Starry Night was a brush, paints, a canvas and loads of talent. But soon you’ll be able to construct a much easier version out of plastic bricks too.

That’s because an intricate 3-D Lego set based on the Dutch master’s magnum opus has just crossed the 10,000-vote threshold on the toy company’s “Ideas” platform, meaning it’s garnered enough support to get approved for production.

If you have any reservations about the structural integrity if a Lego version of a painting, fret not. There’s proof of concept for the new Lego set, courtesy of user legotruman’s mockup.  Consisting of 1,552 pieces—an assortment that appears to go deep in the company well of brick shapes—the set is a vivid, three-dimensional recreation of the pre-dawn view from the artist’s room at the Saint-Rémy-de-Provence asylum in the south of France, where he was a patient from May 1889 to 1890.

The brick model even manages to capture van Gogh’s iconic, swirling brush strokes, recreating them with an assortment plates and curved parts. Completing the set—and our favorite features—is a mini-figure decorated to look just like the artist in his famous final self-portrait, which comes with a paintbrush, an easel and a small reproduction of Starry Night. So not only will you be able to build your own version of the work, you’ll be building a diorama for your little Lego van Gogh to interact with.

There’s no firm release date for the set and we assume some rights issues will need to be sorted out. But considering how frequently Starry Night, which has been a part of the Museum of Modern Art’s collection since 1941, appears on merchandise, we can’t imagine that will be too difficult. When the set finally is available, it will almost certainly join the 3,696-piece Lamborghini Sián FKP 37 and the 696-piece Ducati Panigale V4 R as one of the coolest Lego kits on the market.