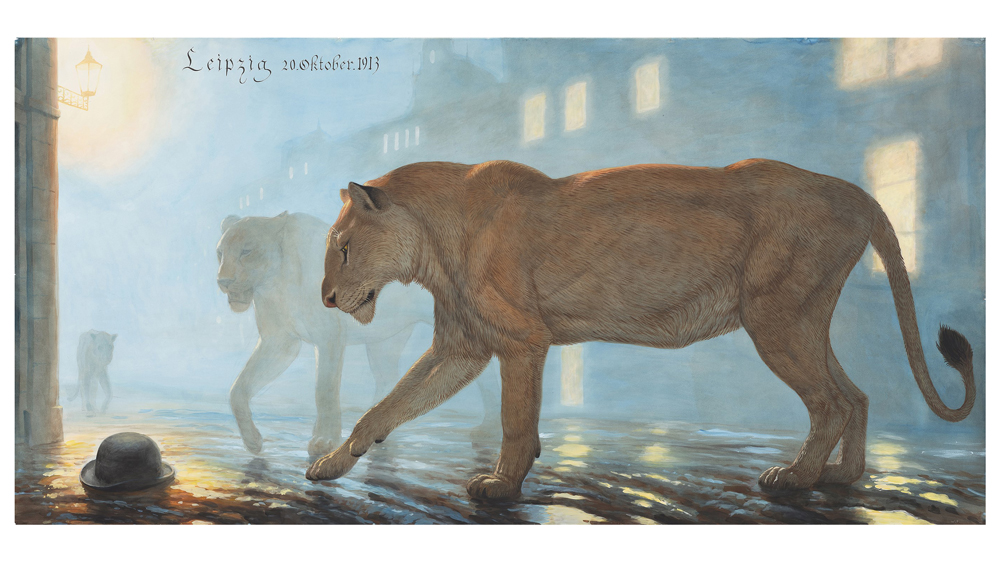 Photo: Courtesy of the artist and Kasmin Gallery

While the lion rarely gets its share these days, the noble beast is in sharp focus in Barbary, an exhibition of five large-scale watercolors by Walton Ford, which is inaugurating Paul Kasmin’s new Chelsea gallery at 509 West 27th Street, adjacent to the High Line.

The fruit of more than 18 years of research, the suite of paintings celebrates the Barbary lion—the beast of the Roman amphitheater, the great mammal painted by Delacroix, and the one that proudly roars for MGM’s film studios—which one might say had been loved to death with the last of the Atlas Mountain denizens perishing in the wild in the early 20th century.

“In my work, I have chosen to deal with the cultural history of animals—how wild animals have interacted with humans and human culture over time, and how humans have imbued certain creatures with such potent symbolism,” says Ford, explaining that in the case of the Barbary lions of North Africa—from what is now Morocco, Tunisia, and Algeria—they were the first lions that Europeans came in contact with. Over the millennia, the creature, which was depicted in art by the earliest civilizations, came to represent nobility and power—perceptions that encourage a reverence and obsession that conversely endangered its survival.

“I was very interested in the fact that our cultural obsession with this animal is more or less the reason why it’s extinct. A lion doesn’t want to be a metaphor for nobility or anything else. But our culture simply couldn’t leave this beast alone. We were constantly capturing it, putting it in zoos, hunting it, having all kinds of spiritual connection with this animal that doesn’t give a f**k about us. We’re like another flavor of meat for them. So, for me, this suite of paintings represents specific moments in the unfortunate cultural history of the lion.”

A standout among the paintings is Leipzig 20 Oktober 1913, which Ford says captures a moment on a fateful foggy night when a circus came to town. A horse-drawn carriage carrying the lion cage toppled over upon crossing a set of trolley tracks, setting free eight lions that would roam the city streets until being killed or captured in what came to be known as the Great Leipzig Lion Hunt. Contrary to the hysteria the lion hunt generated, Ford says, lions on the loose are far more likely to seek refuge than go on a rampage—the last thing on a lion’s mind.

Handsomely scaled at nearly 10 feet wide, the rich, meticulously painted works in the exhibition, which runs through December 22, are priced at $1.2 million each.

Designed from the ground up, the versatile, light-filled, 5,000-square-foot Markus Dochantschi–designed gallery space boasts a rooftop sculpture garden visible from the High Line. And at press time, the green space hosted a presentation of three monumental sculptures by Joel Shapiro.