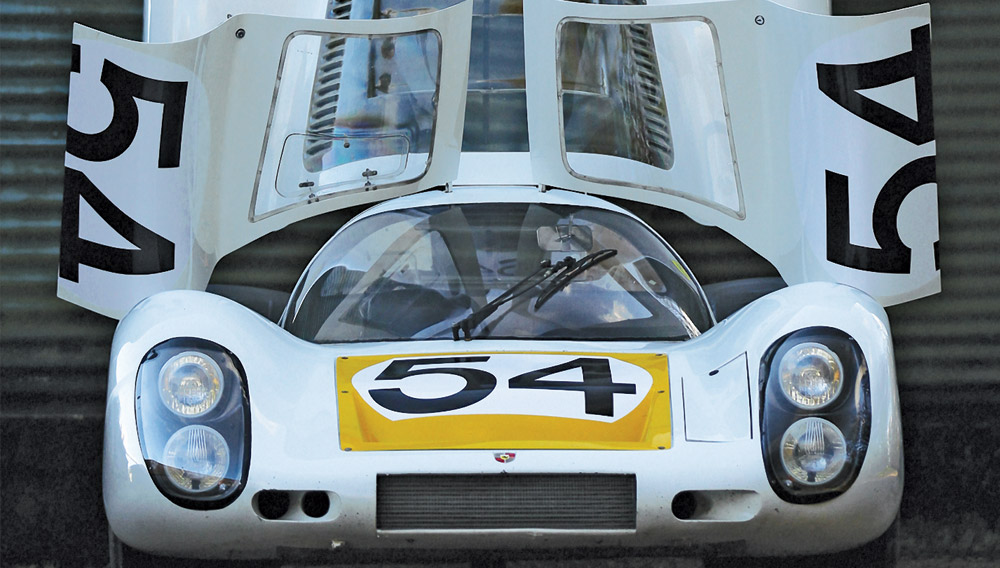 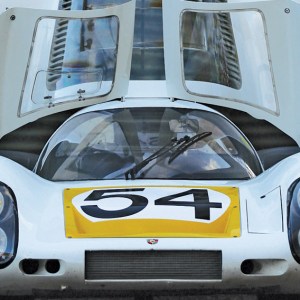 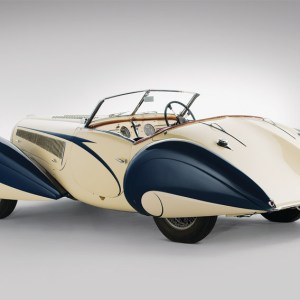 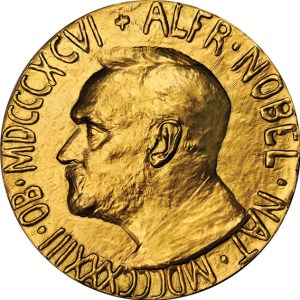 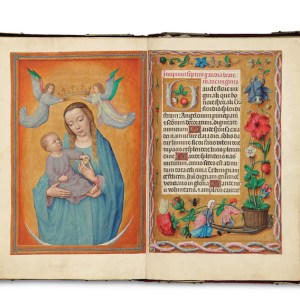 In keeping with its reputation as the champion of more endurance races than any other marque, Porsche dominated Gooding & Co.’s auction at the 19th annual Amelia Island Concours d’Elegance in March with first-andsecond-place sale figures, beating its closest competitor, a 1955 Ferrari 250 Europa GT, by more than $1 million. The results are no surprise with the current uptick in the Porsche market. Leading the auction was the 1968 Porsche 907 Longtail, chassis no. 907-005, the first Porsche to win a 24-hour endurance race and arguably the most successful 907. The 5-speed, 2.2-liter, 8-cylinder racecar crossed first in the historic 1-2-3 Porsche 907 finish at the 1968 24 Hours of Daytona, and in its lengthy five-year career it completed seven 12- and 24-hour endurance events. Of these, chassis no. 907-005 finished fourth overall at the 12 Hours of Sebring in 1969 and earned a class victory at the 24 Hours of Le Mans in 1971.

The success of the 907 lies partially in its narrow, streamlined chassis, defined by undulating fender lines, an aggressive greenhouse resembling a fighter jet’s, and a short, low nose. The 907-005 is one of two remaining in existence (only eight were originally made) and was shown in its 24 Hours of Daytona white Porsche livery. When the car appeared at Amelia Island in 2011 it was voted the most historically significant racecar, and then it was awarded the Porsche Trophy as the most historically significant Porsche when it returned to Amelia Island in 2012. —Amanda Millin

The biggest sale at the Amelia Island Concours d’Elegance—for this year or any other year—was RM Auctions’ 1937 Delahaye 135 Competition Court Torpedo Roadster. The Blue Monaco and Straw Yellow roadster was also $3.3 million higher than any Delahaye previously sold at auction. The French marque built about 30 examples of the Type 135 Competition Court, and chassis no. 48667 is considered the ultimate remaining example. It is one of only two short-chassis models in existence and the only remaining Type 135 Competition Court with a Geo Ham body tag—proof that illustrator Georges Hamel, who is remembered mainly for his racing posters, played a hand in designing the roadster’s Figoni et Falaschi coachwork. The previous owner—the late auto magnate Malcolm Pray—purchased the roadster in 1964, after first falling in love with the car at the 1939 World’s Fair when he was 11 years old.  —A.M.

For the first time at an American auction, a Nobel Peace Prize has gone under the hammer. Carlos Saavedra Lamas’s 1936 Nobel Peace Prize, which was awarded to the Argentine foreign minister for his role in ending the Chaco War between Paraguay and Bolivia, sold for $1,116,250 in March by Stack’s Bowers Galleries, a Southern California–based auction house that conducted the sale in Baltimore. The formidable price of the 23-karat gold medal speaks to the growing popularity of numismatics. In 2013 it was a $5 billion category, according to the Professional Numismatists Guild, a figure that included the sale of a record-setting $10 million silver dollar and the $2.27 million sale of the 1962 Nobel Prize in Medicine given to Francis Crick. The Lamas medal was only the second Peace Prize to sell at auction in the award’s 113-year history; the first was the 1903 Sir William Randal Cremer Peace Prize in 1985 at Sotheby’s London for about $16,750. “This [Nobel Peace Prize] surprised us,” says John Kraljevich, a numismatics consultant for Stack’s Bowers. “Lamas is renowned in Argentina, but without the international fame that Crick has for discovering DNA. This sale exceeded expectations.” —A.M.

When the Rothschild Prayerbook crossed Christie’s auction block for the first time, in 1999, it was part of a London sale of the collection of the barons Nathaniel and Albert von Rothschild. Then, it sold for $13.4 million—the highest price for any item in the collection, and a world record for an illuminated manuscript. The Rothschild Prayerbook was auctioned by Christie’s once again this past January, when it was bought by a private collector for $13.6 million after it returned from a global tour to Moscow, Hong Kong, London, and finally New York.

The Renaissance manuscript, a book of hours, was likely produced circa 1505 for a member of the Dutch royal court. This particular book is considered a masterpiece of the form for its lavish illustrations, borders, and miniatures by the most sought-after court painters of the time, among them Gerard Horenbout, who eventually relocated to England to work for King Henry VIII. —Karen Cakebread

Though the Meiyintang Chenghua “Chicken Cup” looks as modest as a grandmother’s teacup, the simple ceramic vessel—dating to the reign of Chinese emperor Chenghua from 1464 to 1487—carried enormous expectations leading into the Hong Kong Sotheby’s Fine Chinese Ceramics and Works of Art sale in early April. In 1999, the same cup broke a world record for a Chinese work of art, and it did not disappoint at the April event, selling for $36.3 million and setting a new world record. This particular specimen bears an underglaze blue reign mark on the bottom of its foot and is one of only four chicken cups in private collections and about a dozen in museums. The key to the importance of chicken cups as a whole, however, lies largely in the charm of their painted figures and the manner of their production. They are exceptional examples of the difficult 15th-century technique called doucai, in which the artists employed multiple firings and enamels to produce pieces with layered colors of cobalt blue, yellow, light and dark olive green, and different tones of iron red. Then, and now, they represent the epitome of Chinese porcelain, and it is believed that they were not only prized possessions of the emperors, but also part of their everyday lives. —A.M.

William Cody had several careers—cattle herder, wagon train driver, fur trapper, and gold miner—before he joined the Pony Express in 1860, at the advanced age of 14. His better-known moniker, Buffalo Bill, came after the Civil War, while he was an Army scout and when stories spread about his skills as a hunter. He combined all of his experience with perhaps his greatest talent—showmanship—to produce Buffalo Bill’s Wild West show, a traveling spectacle with a cast of hundreds, which ran from about 1886 until Cody was forced to sell the show to creditors, a few years before his death in 1917.

In January, Cowan’s Auctions hosted a sale of what is believed to be the largest privately held collection of Buffalo Bill photographs and personal effects, last owned by Patsy Garlow, Cody’s great-granddaughter. The top lot was a photo album that included 301 images of Cody and the Wild West show, which sold for $23,500. Other albums and individual images documented Cody at leisure and with various foreign dignitaries visiting the Wild West show. The sale included several personal items, such as a set of spurs owned by the Cody family, which sold for $4,700, and Buffalo Bill’s Romances, an anthology of dime novels based on Cody’s exploits and inscribed to his daughter Irma, which fetched $9,400.  —Karen Cakebread

Continue to the next page for more Winning Bids

When the gavel went down on the top lot at the annual Premiere Napa Valley auction in February, the roar in the room resounded across the wine world: An exclusive 60-bottle release of 2012 Scarecrow Cabernet had sold for a staggering $260,000—a record for Premiere Napa, and perhaps the most expensive current release of any vintage ever sold in the United States.

The wine, called Toto’s Opium Dream: Scene III, came from a tiny plot of vines planted in 1945 by J.J. Cohn, a producer of The Wizard of Oz. Dry farmed, hand harvested, and the product of a warm-year vintage that is already exceeding expectations, the cuvée was blended by winemaker Celia Welch, who used two of the four barrels yielded by the plot to create a wine that she calls “almost beyond words—it is complex and complete in a way that is indefinable.”

The buyer, Glen Knight of the Wine House in Los Angeles, is offering bottles for $5,400 each, and three-packs for $13,500. By mid-April, Knight had sold 15 bottles for October 2015 delivery. —Michalene Busico